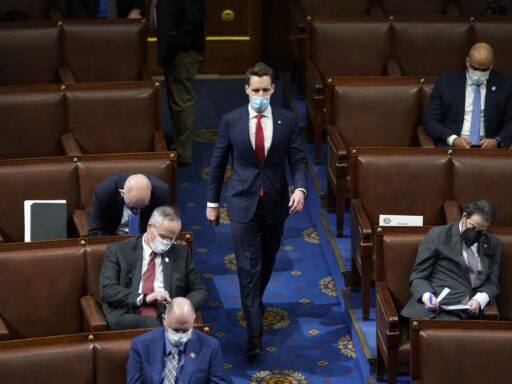 Sen. Josh Hawley (R-MO) says Senate Democrats are engaging in “cancel culture” for filing a request with the Ethics Committee to investigate his role in the January 6 Capitol insurrection. His response was to file his own complaint.

“Your baseless allegations are in that sense unfortunately typical of today’s leftwing cancel culture, a culture that tramples on the democratic traditions that left and right once defended together,” Hawley wrote to senators in filing his countercomplaint.

Seven Senate Democrats called on the Ethics Committee to determine whether Hawley, and Sen. Ted Cruz of Texas (R-TX), incited violence by voting against certifying the presidential election — and whether they coordinated at all with those who committed the violence.

Hawley, an ambitious Trump loyalist, has drawn criticism from Democrats and Republicans alike for his role as a leader in the effort to block certification of Biden’s electoral college victories in Arizona and Pennsylvania. He was the first senator to announce he would vote to reject the election results. On the day of the insurrection, Hawley raised his fist in a show of support to the pro-Trump mob clustered outside the Capitol on his way in to work, just hours before the situation turned deadly.

Any complaint made by a senator automatically gets consideration from the Ethics Committee, which is composed of three members of each party. The Senate Democrats are specifically asking the committee to launch an inquiry into how Hawley’s and Cruz’s election denial inspired insurrectionists, whether there was any coordination between the senators and those who stormed the Capitol, and if their continued efforts to object to election certification after the attack escalated the likelihood of future violence.

In particular, the Democrats have asked the committee to look into Hawley’s and Cruz’s email records and fundraising history for potential proof of coordination and recommended the committee take “strong disciplinary action, including up to expulsion or censure” if evidence is uncovered.

To be clear, that result is unlikely to occur. The committee could recommend censure or expulsion, but it has been 30 and 159 years since they have approved either of those sanctions, respectively.

That didn’t stop Hawley from quickly calling for an investigation of his own, claiming the Democratic senators’ actions were unethical because of potential coordination with Democratic leadership or donors. He also used his countercomplaint to blast Senate Democrats for theoretically abusing their positions by using the Senate Ethics Committee as a vehicle to enforce cancel culture — from his perch as a US senator who is actively exercising his right to demand inquiries into political opponents.

“The idea that one Senator who disagrees with another Senator can therefore have that Senator punished, sanctioned, censured, or removed is utterly antithetical to our democracy and the very idea of open, lawful debate,” Hawley wrote. “This line of thinking is, however, sadly consistent with the woke-mob mentality that you should cancel anyone who disagrees with your views.”

Hawley’s complaint is part of a crusade he has launched since the insurrection against cancel culture, including an op-ed he published in the New York Post Sunday against the “muzzling” of America. His opinions have received widespread coverage among media outlets, and he has a book coming out in May through a conservative publisher after Simon & Schuster dropped him.

Never forget his clenched fist salute to the mob that would soon sack the Capitol. And now he’s assuming the victim posture after American citizens use their free speech to disassociate from a man who tried to break America for Donald Trump, and himself. https://t.co/88xdjEa12e

What can an ethics investigation actually do?

The Senate Committee on Ethics does have the power to recommend censure or expulsion of a member of the body — but it’s a power that’s rarely used.

Chaired by Democrat Chris Coons and Republican James Lankford — who himself entertained voting against election certification — the Ethics Committee has a reputation for inaction. Roll Call’s Chris Marquette reports that the body dismissed nearly every one of the 251 complaints it received in 2019. The last disciplinary action it took was in 2018, when the committee released a letter of admonition against Sen. Bob Menendez (D-NJ) for accepting improper gifts.

The committee’s rules mandate that a complaint be followed by a preliminary inquiry. After that, its members can vote to bring charges and potentially issue a sanction. The two most serious actions possible are censure — a formal condemnation of a senator — or expulsion. The former requires a majority vote in the chamber, and the latter necessitates two-thirds supermajority approval.

Expulsion is extremely rare. Only 15 members have ever been expelled — 14 for supporting the Confederacy in the Civil War, and one in 1797 for engaging in treason.

Censure is infrequent as well. Only nine Senators have been censured, with the most recent case occurring in 1990 over improper spending.

Sometimes, lawmakers under investigation will preemptively resign. For example, Sen. Robert Packwood (R-OR) resigned in 1995 after the Ethics Committee found Packwood used his power as a Senator to sexually abuse women. The committee — including then-chairman Mitch McConnell — unanimously recommended the Senate expel Packwood.

But considering he has reiterated his claims of election fraud, a resignation from Hawley is unlikely despite calls from Democrats and a majority of Missourians, according to a Data for Progress poll from the week after the insurrection.

If Missouri Sen. Josh Hawley had a conscience, he’d resign. He’ll have to be removed https://t.co/AJIUIsEzYX

He has received condemnation from some Republicans, but the idea of all 50 Democrats and 17 Republicans voting to expel him when no expulsion votes have been taken in nearly 80 years and succeeded in over 150 seems impossible. Instead, as Vox’s Li Zhou explains, censure would likely be the only reprobation Hawley’s colleagues could give him:

Given the narrow majorities that Democrats have in both chambers, censure is probably the most aggressive punishment that Republican lawmakers involved in the electoral objections could face from Congress, even though many Democrats don’t see it as a harsh enough response for their attempts to undermine democracy.

The most significant consequence Hawley faces might be from corporations rather than politicians or even voters — dozens of companies have pledged to stop donating to him and other Republicans who voted against election certification.

Dexamethasone shows promise as a Covid-19 treatment
What reopening will look like in Georgia, South Carolina, and Tennessee
Many world leaders have held national coronavirus memorials for the dead. Trump hasn’t.
Disney thinks you’ll be ready to see Black Widow in theaters by May
A fake Tom Ford quote about Melania Trump is going viral on Twitter
Vox Sentences: Paris promises falling short