Healthcare.gov glitches almost ruined the end of open enrollment. Is there a better way? 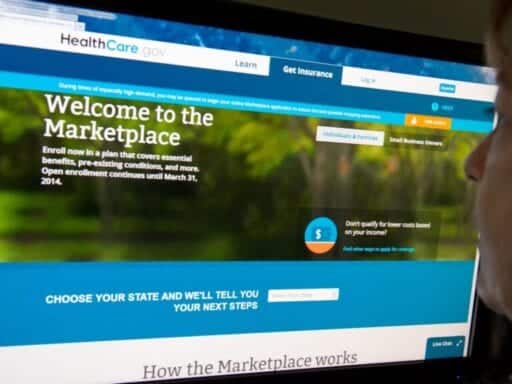 Auto enrollment, premium surcharges, and single-payer could be alternatives to open enrollment.

Sunday night, on the final day of open enrollment for 2020 coverage, healthcare.gov appears to have had a meltdown. There were widespread reports of the insurance website that serves nearly 40 states being glitchy — a particularly egregious snafu because, history has shown, most people wait until the last minute to sign up for coverage.

The Trump administration has decided to offer an extension to Wednesday, December 18, for people who were tripped up by the technical errors, after advocates and Democrats urged them to make such an allowance. We’ll know for sure what the effect of all this confusion actually is when we see the final 2020 enrollment numbers, which had to date been lagging slightly, but not too far, behind 2019.

But this raised a very basic question: Why is there just this one period when people can sign up for insurance? Whether it’s Obamacare plans, your company’s insurance, or even Medicare Part D, typically, if you don’t sign up during the once-a-year open enrollment period, you’re kind of screwed.

Isn’t there a better way?

Maybe. But given how insurance works, we need punitive incentives to encourage people to sign up when they don’t necessarily need it, rather than waiting until they do.

Insurers need healthy people, with low medical expenses, to pay premiums that help cover the bills for sicker people with higher costs. You can use carrots (like premium subsidies) or sticks (like an individual mandate) to compel the healthy people to sign up.

”We don’t let people sign up for coverage outside of open enrollment to limit adverse selection — because adverse selection is real,” Caroline Pearson, senior vice president at NORC at the University of Chicago, says. “Individuals have the most information about their health status. Particularly for people who are reasonably healthy, many may elect to remain uninsured until they need care.”

That doesn’t mean there aren’t other ways to do it. People have proposed alternatives here in the United States and other countries use different policy levers to encourage people to get insured. But each of them comes with their own set of tradeoffs, just as an open enrollment period can be vulnerable to a finicky website that crashes at the deadline.

When Republicans were debating their Obamacare repeal bill, they thought they needed a replacement for the individual mandate in order to make sure people still sign up for coverage. They considered a continuous coverage policy that would have penalized uninsured people when they finally did enroll in an insurance plan by establishing a waiting period before preexisting conditions would be covered. When Democrats were debating Obamacare, they briefly considered a late enrollment penalty, though it didn’t make it into the final law.

Another solution is automatic enrollment: Everybody is signed up for insurance, whether by choice or not.

In the Netherlands, people who don’t sign up for their universal private coverage during the annual enrollment period are automatically enrolled in a plan and have to pay a premium 20 percent higher than what they would have paid if they signed up voluntarily. The Dutch have achieved 99 percent coverage under such a system, which shares other features with Obamacare (like subsidies and the ban on preexisting conditions).

There are other sticks we could deploy that let people get covered outside of open enrollment — but they are still penalties. As we saw with the individual mandate, Americans are not particularly keen to be forced to sign up for coverage.

Some of the health care proposals Democrats are debating in their 2020 primary would negate the open enrollment problem. Under Medicare-for-all, everybody is automatically eligible for the same single government insurance plan. Under the various public options that have been proposed, uninsured people would be automatically enrolled in the new optional government plan. One advantage the government has over private insurers is it doesn’t need its books to balance perfectly; adverse selection isn’t as big a concern.

But for now, open enrollment is the tool we have, along with the carrot of premium subsidies, to encourage people to sign up. We’ll see if any minds start to change about the wisdom of such an approach after the apparent calamity on Healthcare.gov Sunday night.

SNL’s cold open spoofs Rudy Giuliani’s absurd Michigan hearing
Newt Gingrich just revealed what the Kavanaugh fight was really about
Amazon has been frustrating during the pandemic, but Prime is more popular than ever
Vox Sentences: The Trump administration is not down with CPP
CDC reverses guidelines, telling people to get tested for Covid-19 even without symptoms
How coronavirus is changing the ways we grieve and mourn the dead