Here are House Democrats’ next steps on impeachment 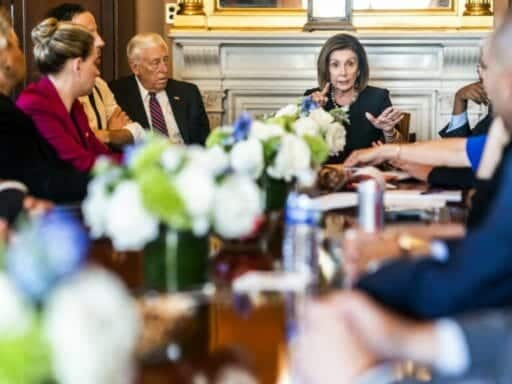 Democrats’ impeachment investigations are ramping up, with the Intelligence Committee leading the charge.

The US House of Representatives has now launched a full-blown impeachment inquiry focused heavily on President Donald Trump’s communications with the president of Ukraine. It’s also set to leave on a two-week recess starting Monday.

With so much impeachment momentum building this week, some progressive groups want Democrats to stay in DC and keep working (some actually will). But the No. 2 House Democrat argued lawmakers should go home as scheduled and explain the impeachment push to their constituents.

House Democrats are narrowing the focus of their impeachment inquiry from a larger probe on whether the president obstructed justice in regards to the Mueller investigation, instead homing in on Trump’s phone call with Ukrainian President Volodymyr Zelensky in which he asked Zelensky to investigate former Vice President Joe Biden and his son.

And they’re looking hard at new allegations, detailed in a whistleblower complaint made public Thursday morning, that the White House attempted to cover up that phone call.

House Speaker Nancy Pelosi told reporters on Thursday that the House Permanent Select Committee on Intelligence, led by Adam Schiff (D-CA), will take the lead on the Ukraine investigation for now. She also batted down talk from some in the Democratic caucus that articles of impeachment should be voted on by next month, saying they would continue to follow the facts.

“Our consensus in our caucus is that we will proceed under the auspices of where this matter is relevant and that is in the Intelligence Committee,” Pelosi said. “There are some in our caucus who think, ‘Let’s have an impeachment.’ No, we have to have an inquiry to further establish the facts. There is no rush to judgment.”

But just as the investigations are starting to ramp up, the House is scheduled to go on a two-week recess starting on Monday. As some called for recess to be canceled, House Majority Leader Steny Hoyer (D-MD) was adamant that Democratic members should go home and talk to their constituents.

“I think it’s very important for members to go home to their constituents and explain what they’re thinking,” Hoyer told reporters Wednesday. “This is a matter of grave importance and the American people need to understand what is occurring.”

What’s next for House Democrats’ investigations

Though the House will be on break for two weeks, Intelligence Committee chair Schiff told reporters on Thursday that his committee “[will] be working through the recess.”

“The [whistleblower] complaint gives us a pretty good road map of allegations that we need to investigate,” Schiff said. “There is a whole host of people apparently who have knowledge of these events.”

The Intelligence Committee and others were already investigating the possibility that Trump used the office of the presidency for his personal gain well before the news about the president and Zelensky exploded.

Schiff, as well as the chairs of the House Oversight Committee and the House Foreign Affairs Committee, have been asking the White House to turn over information on Trump’s communication with Ukraine since early September, with Thursday as a final deadline.

If the White House doesn’t provide the information by that deadline, subpoenas will likely go out, a source told Vox.

It’s unclear whether the committee will subpoena current or former Trump administration officials to testify, but several officials who resigned this summer shortly before the Ukraine scandal broke — including former Director of National Intelligence Dan Coats, former Principal Deputy Director of National Intelligence Sue Gordon, and former National Security Advisor John Bolton — could be people for them to start with.

One House member on the Intelligence Committee told Vox the committee plans to hold a public hearing this coming Friday but said there were few details on who would testify.

Schiff also indicated his committee has requested an interview with Michael Atkinson, the Inspector General of the Intelligence Community (and a Trump appointee) who first flagged the whistleblower complaint to lawmakers. Schiff said he was seeking the interview so the committee could “determine what [the IG] was able to find in his preliminary investigation.”

And, Schiff added, “We’re obviously going to be bringing the whistleblower in.”

If Democrats decide they want to move forward with articles of impeachment, that will eventually run through the House Judiciary Committee. But for now, that committee is largely sitting back and letting Intelligence take the lead, lawmakers said.

“Right now we are just happily watching the Intelligence Committee do a superb job of getting the facts,” Rep. Jamie Raskin (D-MD), a Judiciary Committee member, told reporters.

Democrats will go home to talk to their constituents, hoping to change public sentiment on impeachment

Equally as important as digging in on an investigation is the question of whether public sentiment on impeachment will change. House Democrats are about to return to their home districts for two weeks to find that out.

But sentiments can change quickly. When Politico and Morning Consult conducted their poll again after Pelosi announced the impeachment inquiry, they found support for impeachment jumped to 43 percent of voters, tied with another 43 percent who opposed it. Another NPR/PBS NewsHour/Marist poll showed a similar split, with 49 percent of people in favor of impeachment and 46 percent opposed.

Those are just a couple polls; we’ll have to wait for more data to see if the impeachment push actually has momentum among the public. But polling certainly suggests that public sentiment is changing rapidly.

Pelosi has always proceeded with the utmost caution on this, arguing up until this week that Democrats didn’t have the public support they needed to proceed with impeachment.

But this week’s news was evidently serious enough to change her mind. Now that the White House readout of the Trump-Zelensky phone call and the whistleblower report have both established that he did in fact ask Zelensky to investigate Biden (and Trump himself has publicly admitted it as well), public sentiment could shift.

Some moderate freshmen Democrats in swing districts said they’ve been hearing mixed things from constituents but estimated most of it has been positive.

“We and our four offices have gotten roughly 140 calls, and roughly 80 percent of them have been positive,” said Rep. Elaine Luria of Virginia, who was one of the seven freshman Democrats who penned a Washington Post op-ed supporting impeachment on Monday night. Luria added that the negative calls she’d received were from constituents concerned there wasn’t enough information to make a decision.

“To me, it’s clear and convincing,” she said.

Inside Pedialyte’s journey from toddler flu remedy to hangover fix
Live results 2020: Nevada is still counting ballots
Does increasing the tipped minimum wage actually help workers? 7 experts weigh in.
Terry Crews is calling out celebrities for mocking his alleged assault
Time’s Up was at the center of the 2018 Golden Globes. What has come of it?
Odd Job: the professional gift wrapper who’s having a “really lucrative” holiday season