Here are some goats wreaking havoc on a Boise neighborhood 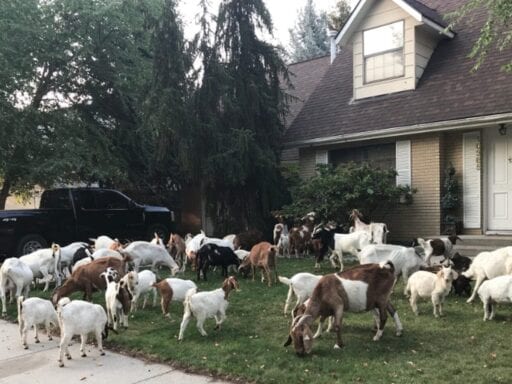 More than 100 goats feasted on the suburban lawns.

More than 100 goats took over a neighborhood outside of Boise, Idaho, and because it is August, and also pretty adorable, it is now news.

#Breaking – About 100 goats are on the loose right now in a #Boise neighborhood. They are going house to house eating everything in sight. Nobody has a clue where they came from…updates to follow pic.twitter.com/K0ghUwQEfk

Party is over “kids”! Loose goats have been cornered and loaded back onto a truck owned by “We Rent Goats” pic.twitter.com/qWHrb7X7n6

Animal control showed up, according to KTVB, but only brought one truck for 118 goats. The source of the goat invasion remained a mystery until the news station discovered that they belonged to a company called We Rent Goats, which specializes “in renting herds of goats to remove noxious weeds from fields, acreage, pastures, open spaces, ditches, ravines, embankments … you name it and the goats can clear it.”

It turns out the goats were on the clock, eating weeds in a drainage ditch, according to the Washington Post. They broke free and, naturally, went on to sample the suburban flora. Their feast/free lawn care services ended by around 8:30 am local time — about an hour and a half later — when the bosses of We Rent Goats arrived in the neighborhood to round up their rogue employees.

Party is over “kids”! Loose goats have been cornered and loaded back onto a truck owned by “We Rent Goats” pic.twitter.com/qWHrb7X7n6

North Korea is giving Biden the silent treatment
Three big ideas for tech regulation from Senator Mark Warner
Wisconsin Supreme Court rules, on partisan lines, to require the state to hold its election tomorrow
Some front-line workers are now eligible for the vaccine. Employers might pay them to get it.
The Supreme Court postponed next week’s arguments due to coronavirus precautions
Do the soaring sales of anti-racism books signal a true cultural shift?