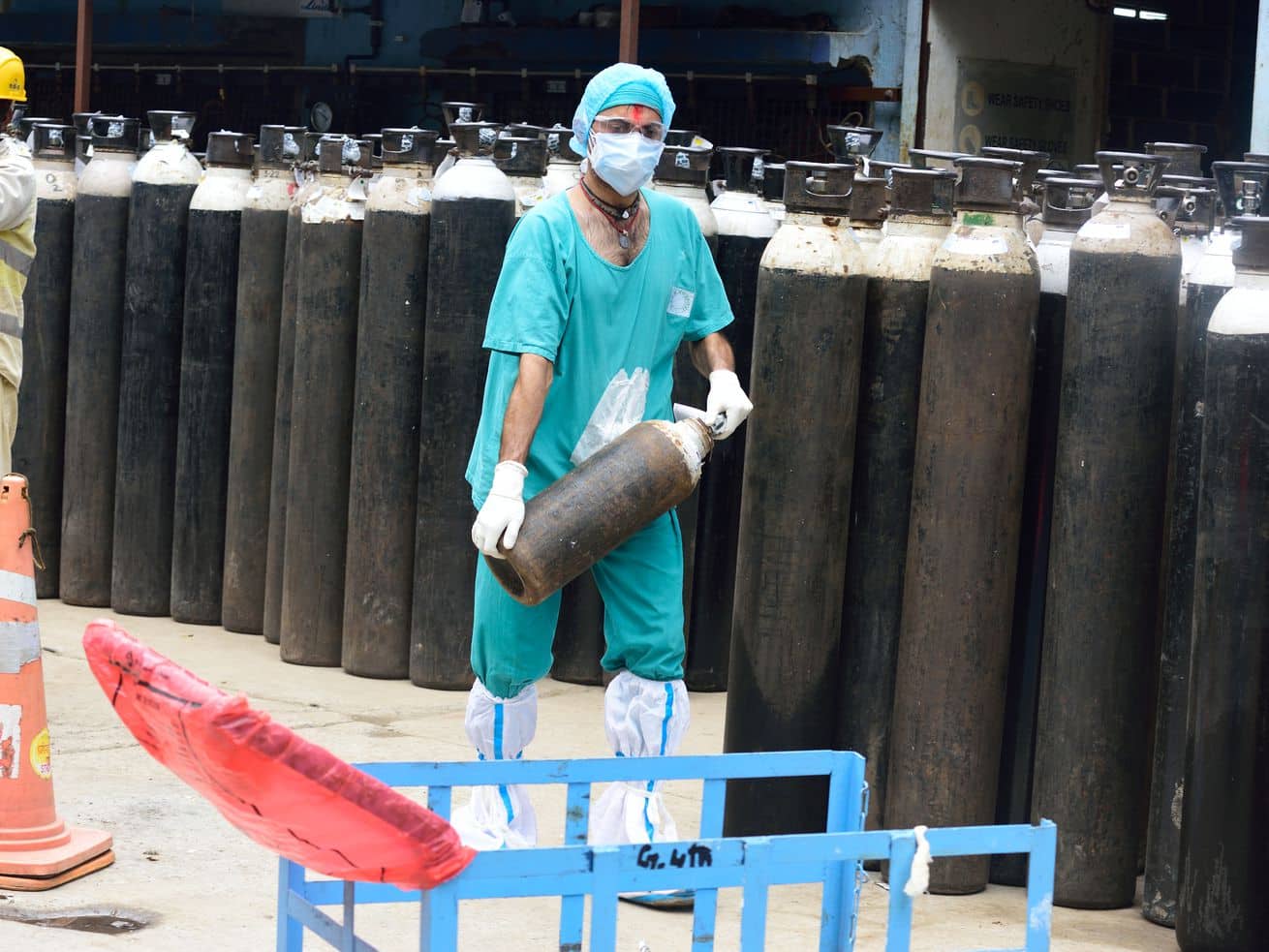 If you want to know where your money will go the furthest, check out these four charities.

The Covid-19 crisis in India is almost incomprehensible in scale.

According to official records, about 4,000 people are dying every day. That underestimates the real crisis, and some estimates suggest that it’s truly tens of thousands. Hospitals are overwhelmed, meaning that many people are dying who could have been saved.

That raises the perennial question of disaster relief: What can the rest of the world do to help? On social media, people in India have shared live their desperate struggles to find hospital beds and oxygen. Many of them have asked for help — and many people have been looking for ways to help.

The challenge, as always in these situations, is making sure that your donation actually does have an impact. And donating to India effectively — that is, ensuring that money buys real improvements in access to care during the surge in cases — is complicated. New rules that Prime Minister Narendra Modi put in place in the middle of the pandemic added hurdles to collaborations between international and Indian nonprofits, and while most of the online fundraisers to aid people in India are legitimate, it’s hard for donors to verify them or determine whether they still need additional funding.

That said, there are real, cost-effective ways to help. The organizations below have been reported to be doing important work during the pandemic, and are decent bets to target with donations if you’re looking for ways for your dollar to make the biggest impact.

A promising area to point your donations toward is the provision of medical supplies.

Medical supplies can save lives in the middle of a Covid-19 outbreak. Access to masks and personal protective equipment, especially for doctors and nurses, can ensure people don’t get sick in the first place. Meanwhile, access to oxygen concentrators — which take in air from the surrounding environment and offer a person concentrated oxygen to breathe — can ensure that people who are suffering from moderate to severe Covid-19 can recover at home and don’t need intensive care at a hospital.

Masks are fairly widely available in India, so there’s not as much need there. That said, campaigns to convince people to wear them — mask uptake can still get better — might be highly cost-effective to donate to. Researchers at Yale have partnered with researchers in South Asia to develop such campaigns, which have been found to be highly effective at persuading people to wear masks more often, especially in the situations (indoors and in poorly ventilated areas) where it’s most important. Innovations for Poverty Action, a nonprofit that scales up effective global poverty work, is now trying to encourage mask-wearing in at-risk areas, and accepts donations.

A more straightforward need is for oxygen concentrators, which are in desperately short supply. Student researchers Tejas Subramaniam at Stanford and Manya Gupta at the University of Pennsylvania compiled a list of the most promising fundraisers for oxygen concentrators, ranking them by ease of accepting money from international donors, cost-effectiveness, trust and transparency, and room for more funding.

(Other types of equipment, like oxygen cylinders, are also needed for those who have severe Covid-19 and require intensive care. But there’s a problem there — they are harder to import internationally; only empty cylinders can be sent on planes, and India doesn’t currently have the spare oxygen to refill them.)

Beyond donating money to help with the supply problems, another good option is directly sending money to low-income families affected by Covid. In general, sending people cash is slightly less effective than the best public health interventions in confronting pandemics. That’s because public health interventions can be incredibly targeted: Oxygen therapy will go to people who cannot breathe, whereas it’s hard to get money to exactly the people who will be able to afford lifesaving treatment with the money and not without it.

But giving people money is also more flexible, allowing people to choose what aid they want the most. Work by Nobel-winning economist Abhijit Banerjee last year found that cash transfers “significantly improved well-being on common measures such as hunger, sickness and depression in spite of the pandemic.”

The GiveIndia Cash Transfer fundraiser gives one-time $400 payments to families who have recently lost a relative to Covid-19. It’s an established cash transfer charity with a good track record, and it’s positioned to absorb lots more funding. (That is, while some organizations end up with more money than they know what to do with after a surge of donations, GiveIndia can actually take in donations and use them to do immediate good.)

Many of these charities have had to go through interesting workarounds to fundraise for India despite the new NGO fundraising law. Act Grants, which is a partner behind the Swasth’s Oxygen for India fundraiser, was set up by India’s tech community and largely raises money from Silicon Valley, and according to the New York Times it’s had to direct donations through charity partners because of the new law. But as of May 12, all of the organizations above are able to accept donations, have room for more funding to expand their operations, and are making a real difference.

Ways of donating that don’t work as well

Vaccination is the only real way out of the pandemic, but experts who’ve looked at giving opportunities in India are skeptical that individual donors can help speed vaccinations, which are mostly constrained by supply, not by insufficient funding. (Donating to Covax is still a good idea — it just won’t affect the near-term situation in India.)

“Our current best guess is that private donations directed toward vaccination efforts in India — at least at the level of individual donors — is unlikely to substantially change vaccination rates, because the main bottleneck in the short term is vaccine supply, which depends significantly on government action,” Gupta and Subramaniam’s analysis finds.

Sending vaccines to India would be a great idea, and the Biden administration should do it, but that’s not something regular people can do individually either. (Pressuring your congressional representative might well be a good idea.)

Early in the pandemic last year, many logistics experts anticipated that ventilator shortages would be one of the biggest problems in a pandemic. India is indeed short on ventilators, but, more critically, it is short on trained nursing staff who can operate ventilators. As in New York City during the height of the US crisis, the equipment is proving to be less of a bottleneck than the staff — and there’s little an individual donor can do about that at this moment.

The last principle worth keeping in mind for disaster relief as India is overwhelmed with the pandemic is a sobering one: It’s not just India. The same dynamic that drove this surge of cases in India — which is believed to be caused by more contagious variants, plus loosening of social distancing precautions after a year of wearying pandemic measures — is driving similar problems elsewhere.

“If today, the suffering is in India, then in no amount of time it will go to the whole of the world,” Dr. Harjit Singh Bhatti warned at Vox two weeks ago. The weeks since then have already proved him right: Brazil and Nepal are both overwhelmed with Covid-19 cases, and other countries are seeing their case numbers creep up.

That’s not a reason not to send aid to India. Addressing the crisis in India will hopefully teach us lessons that can be used to address similar surges elsewhere. India is also a world-leading manufacturer of Covid-19 vaccines and protective equipment, so getting the country back on its feet will help the world combat the virus everywhere else. Sending aid to India will save lives and also equip us to solve the big-picture problem here — it would be a mistake to take the big-picture situation as a reason to do nothing at all.

But with that said, rich countries can’t address the pandemic just by having their citizens send oxygen concentrators overseas. Ending the pandemic requires a much larger, more coordinated, more ambitious plan than that. The US has yet to spend the money that would be needed to buy vaccines for the whole world, scale up manufacturing, and deliver them to everyone — anywhere — who will take them.

But the US government has shown some signs of being responsive to public pressure on global Covid-19 policy. At first, the Biden administration opposed a call by India and South Africa to waive intellectual property rights for the Covid-19 vaccines, but after public outcry, they reversed course.

Intellectual property waivers won’t do much by themselves, but there are things the Biden administration could do that would really matter: funding vaccinations for the whole world, investing in building more mRNA factories, and sending the doses the US has stockpiled. Keeping up public pressure on the Biden administration may, in the long run, be as crucial for India and the rest of the world as oxygen and medical supplies are.

5 key congressional races to watch on March 17
The confusing and vague federal guidelines for states to reopen, explained
Your food delivery app comes at a cost to restaurants
Trump’s Supreme Court shortlist is an attempt to remind his base why they love him
America under Brett Kavanaugh
What does “shelter in place” really mean?