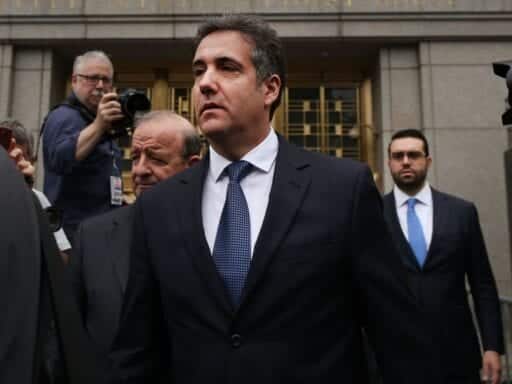 “I need to open up a company for the transfer of all of that info regarding our friend David,” Cohen is heard telling Trump on the recording.

President Donald Trump called it “inconceivable” that his former attorney Michael Cohen would tape their conversations. But he did — and now CNN has published one of the recordings, featuring a discussion about paying off a former Playboy model who claims she had an affair with Trump.

On the tape, Cohen and Trump discuss a payment to Karen McDougal, who says she had an affair with Trump in 2006 and 2007. CNN aired the conversation, which was allegedly recorded in September 2016, on Tuesday night.

“I need to open up a company for the transfer of all of that info regarding our friend David,” Cohen says to Trump on the recording. Cohen is apparently referring to American Media Inc. chief David Pecker.

Cohen had helped arrange a deal between McDougal and American Media Inc. in August 2016. The deal wasn’t for the tabloid to publish her story, but to hush it up: McDougal sold the rights for $150,000, and the promise it would publish some of her fitness columns in exchange for her staying quiet about the alleged affair. (The Wall Street Journal reported on the deal between McDougal and AMI in November 2016. In April 2018, McDougal successfully sued to get out of the agreement.)

The recording is a bit fuzzy, but, per CNN:

Trump interrupts Cohen asking, “What financing?” according to the recording. When Cohen tells Trump, “We’ll have to pay.”

What comes next is a little unclear: Trump says “pay with cash,” but his voice is muffled and it’s possible he said “don’t pay with cash.” Then, in response, Cohen says “no, no,” and the tape cuts off.

Here’s the full audio, which also includes Cohen praising Trump on a recent poll, Trump demanding a Coke, and an exchange about Trump trying to block the New York Times from unsealing the records from his divorce from his first wife, Ivana.

Full audio: Presidential candidate Trump is heard on tape discussing with his attorney Michael Cohen how they would buy the rights to a Playboy model’s story about an alleged affair Trump had with her years earlier, according to the audio recording “https://t.co/YmC0QuDqTx pic.twitter.com/fBbq7r1Lq9

The existence of the tape was first reported this weekend. Trump’s attorney Rudy Giuliani confirmed that the tape existed, but said the president hadn’t done anything wrong. “Nothing in that conversation suggests that he had any knowledge of it in advance,” Giuliani told the Times.

The tape recording would seem to contradict Giuliani’s statement, though the static and unclear portions of the recording make it hard to make out the entire conversation between Trump and Cohen. It also makes clear that Hope Hicks was lying when she spoke for the campaign about McDougal in November 2016, telling the Wall Street Journal that “we have no knowledge of any of this.”

Trump also denied that he did anything wrong. After tweeting that it was “inconceivable” that his attorney recorded him, Trump declared: “The good news is that your favorite President did nothing wrong!”

This tape was reportedly one of a dozen seized by the Southern District of New York during a raid of Cohen’s home, office, and hotel room back in April. The other 11 are reportedly just conversations Cohen had with the media, leaving just one that involves Cohen’s dealings with Trump.

Startups still love Slack but big companies are bailing
The real stakes in the David Shor saga
Facebook banned violent militia groups. We still found plenty of them on its platform.
Democrats used their impeachment questions to call out Trump’s lies and sexual misconduct
Watch a top Republican blast Trump’s foreign policy in front of Mike Pompeo
The many places you can buy Beyond Meat and Impossible Foods, in one chart