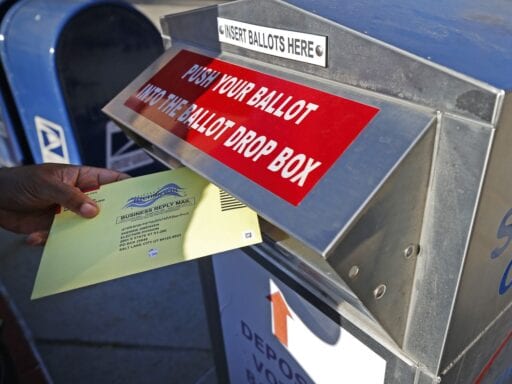 Share
Loading...
A voter drops off his mail-in ballot at a drop box at the Salt Lake County election office in Salt Lake City, Utah, on October 29, 2020. | George Frey/AFP via Getty Images

It’s too late to vote by mail, but here are some tips if you’ve already sent your ballot back.

So far, more than 60 million mail-in ballots have already been sent back to election officials. If you voted by mail, you might be wondering: Is my ballot one of those?

The answer to that question likely depends on your state, but most record the receipt of a mail-in ballot and in many cases note whether election officials have accepted or rejected it. If your ballot hasn’t been received, or if it’s been rejected, there may be some steps you can take to remedy this — although, with one day until the polls close, those options are narrowing.

Here’s how to find out the status of your mailed-in ballot and what to do if there’s a problem with it.

How to track your ballot

Let’s start with the facts: It’s too late to vote by mail. If you have your mail-in ballot in hand, your only option is to drop it off at an election office, polling site, or drop-off location before or on Election Day (check what options are available to you where you live, and the drop-off deadlines). Otherwise, plan to vote in person on Election Day.

If you’ve already voted by mail, or dropped off your ballot, most states offer a way to track that from the time you requested it to the time it was received by your local election officials (here’s a good state-by-state list with links to each state’s website).

States and counties may use different methods to track your ballot, so if you’re not already enrolled in ballot tracking, go to your state election website (you can also search for it here) and see what options are available to you. Some states also have an online voter portal, so you can check the ballot status there.

Obviously, what you’d like to see is that your ballot has been received and accepted. If it hasn’t been received yet, don’t panic. The ballot might still be on its way. If you just recently dropped it off or mailed it in, it’s possible it just might not have been recorded yet.

The increase in voting by mail also means election officials just have a lot more ballots to sort through, and, as a consequence, it is going to take longer for some jurisdictions to get to each envelope and update their systems. Election officials in New Jersey, for example, said there’s a week’s lag time in scanning ballots. That’s maybe not reassuring, but it’s the reality in many places.

But if you sent your ballot back weeks and weeks ago and you still don’t see it as having been received, call your local election officials. Many local election offices are being inundated by voters with similar concerns, so it may take a few tries.

When you do get an official on the phone, you should ask the status of your ballot — election officials may have information that hasn’t been posted yet. If they say it hasn’t been received yet, ask what your options are, if there are any.

Some states, such as Michigan, will let you “spoil” your mail-in ballot, allowing you to sign an affidavit canceling your mail ballot so you can then vote in person. Some states, such as New York, allow in-person votes to override mail-in ballots automatically. Some states may let you vote via provisional ballot, a kind of backup ballot that will count if you’re an eligible voter and another ballot isn’t received. But every state has different rules, so make sure to check with your local election officials before you do anything.

If your ballot has been received, but it has been rejected or canceled, also check your state website to see what options are available to you. Some states are supposed to notify voters and reach out to them directly if their ballot can’t be accepted — for example, if it’s missing a voter or witness signature.

But that notification might come in the mail, and who knows when it will arrive; or election officials might not have your current phone number or email address to swiftly contact you if your ballot is rejected. And some states aren’t required to do so. So if you’re concerned at all, call your local election office directly.

At least 18 states require election officials to contact voters if there’s a problem with a ballot and give them a chance to correct, or “cure,” their ballots, according to the National Conference of State Legislatures. Other states have adopted new procedures to cure ballots starting this election.

In Pennsylvania, for example, the secretary of state’s office says that if your ballot has been rejected because it’s missing a signature or it came in “naked” (when voters forget to include the outer “secrecy” envelope), you should plan to vote in person with a provisional ballot, and “the county should count that vote so long as the voter meets other provisional ballot requirements, and the county determines that the voter is eligible to vote.”

The bottom line: Check your ballot status, and if anything seems amiss, check your state’s election rules; if you can’t find the answer there, contact your local election officials and ask them what to do.

Unfortunately, there’s going to be a lot of uncertainty here

The unprecedented number of mail-in ballots in 2020, especially in states that aren’t used to handling so many absentee voters, means this was never going to be a problem-free experiment.

Mail-in ballots typically have a higher rate of rejection than ballots cast in polling places. This isn’t because of voter fraud, but rather because humans are, well, human, and make mistakes.

Mail-in ballots can get rejected in some states if a voter’s ballot signature doesn’t match the one in their voter registration file. Sometimes voters forget to sign at all, or use the wrong color ink. And many ballots are disqualified because they arrive too late to be counted.

But, again, do not go by this if you haven’t postmarked your ballot; it’s too risky. That’s because some of these deadlines are still being litigated. In Pennsylvania, for example, ballots need to be postmarked by November 3, but they’ll be counted as long as they arrive by November 6. But Republicans are challenging that, so Pennsylvania has to separate out ballots received after Election Day in case there’s a court ruling that invalidates them. Something similar is playing out in Minnesota.

All of which is to say there’s a lot of uncertainty, and some of the questions as to whether mail-in ballots may count are still, frustratingly, in flux. And because we’re so close to Election Day, voters have dwindling options.

According to the US Elections Project, there are still about 30 million outstanding mail ballots — meaning of the 90 million ballots requested or sent out, roughly one-third haven’t yet been returned.

That statistic may sound alarming, especially to Democrats who are more heavily voting by mail. But Michael McDonald, the University of Florida professor who runs the US Election Project, has said this stat might be an overcount. That’s because mail-in ballots may still be in transit, or they may have arrived at election offices but haven’t been logged yet, and because people who requested ballots may end up voting in person instead.

“Election officials in many states have never had to process so many mail ballots, so reporting delays and inconsistencies in reporting are understandable,” McDonald wrote in a recent blog post. “When there were only tens of thousands of mail ballots statewide in some of these states, it was relatively easy to process the ballots and no one really cared about the few where someone may vote in-person.”

If you’re worried about the status of your mail-in ballot, that’s completely understandable. You can check its status online now. You can also call your local election officials if you have questions, but with so many people calling, do that only if there’s an obvious reason to be concerned — for example, if your ballot has been rejected, or you mailed it in a really long time ago and it still hasn’t been received.

If you just sent in your ballot, it may still be en route. Some states will still be counting ballots after Election Day — though, again, don’t bank on this if you haven’t voted yet. Don’t freak out: If you’ve voted early, and followed the instructions, there’s already a very good chance your vote will count.