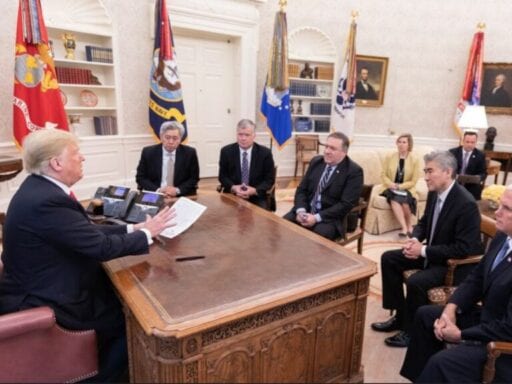 Just the day before, Pompeo had announced that he was planning to visit the country for a fourth round of talks, with the hope of convincing Pyongyang to dismantle its nuclear program.

So why did Trump cancel the visit? Two reports from the Washington Post and CNN seem to provide an answer: North Korea sent a very angry letter to Pompeo.

The letter reportedly came from the secretary of state’s North Korean counterpart, Kim Yong Chol, who is very close to North Korean leader Kim Jong Un, although it’s unclear how precisely it got to Pompeo.

The message was clear: The US had shown no real willingness to sign a peace treaty to end the Korean War (which officially continues to this day, even though fighting stopped in 1953), but instead issued repeated requests that Pyongyang give up some of its nuclear weapons first (a request the Kim regime has declined multiple times).

North Korea, it seems, is very unhappy. Because “the US is still not ready to meet [North Korean] expectations in terms of taking a step forward to sign a peace treaty,” the North Korean official wrote, the current negotiations are “again at stake and may fall apart.”

Mintaro Oba, a former State Department official who focused on North Korea, told me the letter shows “a mix of genuine discontent over the direction of talks and the standard North Korean negotiation tactic of raising tensions when it suits their interests.”

The letter was probably intended to convince the Trump administration that their current approach won’t work, without blowing up the talks completely or offending the president, Oba continued.

“Judging by the president’s response,” he said, “the North Korean letter did just that.”

“We need to start escalating”

Pompeo reportedly showed the letter to Trump in the Oval Office on Friday, and was in the room when the president tweeted about the trip’s cancellation.

“I have asked Secretary of State Mike Pompeo not to go to North Korea, at this time, because I feel we are not making sufficient progress with respect to the denuclearization of the Korean Peninsula,” Trump tweeted on Friday. “In the meantime I would like to send my warmest regards and respect to Chairman Kim. I look forward to seeing him soon!”

There’s real reason for Trump to worry about the state of North Korea’s denuclearization efforts ever since he met with Kim Jong Un in Singapore on June 12 for their historic summit.

North Korea has actually continued to develop nuclear weapons throughout the negotiating process, according to the International Atomic Energy Agency, the world’s nuclear watchdog. Meanwhile, China and Russia continue to help North Korea skirt trade restrictions even though they originally agreed to impose stringent financial penalties on the country.

The worry now is that Trump may soon consider new measures over talks, such as harsher economic punishments or even a military option, in part because of the advice of North Korea hawks like National Security Adviser John Bolton.

“If the North Koreans don’t move the ball forward, Bolton will argue to Trump, ‘You don’t have to admit you were wrong, but we need to start escalating against them to force them to keep their commitments,’” an unnamed senior administration official told the Washington Post’s Josh Rogin.

And a source close to the White House told me on Friday about two economic proposals the administration is considering that are intended to punish North Korea. First, the US would ask the United Nations Security Council to place a full oil and gas embargo on North Korea. And second, the US would place sanctions on multiple Chinese companies and possibly banks, since many of them help launder North Korean money.

And then, of course, there’s the potential for a military strike. In February, two months before joining the administration, Bolton penned an op-ed in the Wall Street Journal making the case for attacking North Korea. If Trump were to accept that proposal, it could lead to one of the world’s worst wars.

It’s unclear how Trump will proceed from here, but what is clear is that a single angry letter led him to derail the diplomatic negotiations for now.

Here’s how Bernie Sanders handled a pointed question about Soviet communism
The real differences between the 2020 Democrats’ health care plans, explained
Watch: the 6 best performances from the 2019 VMAs
Emmy nominations 2019: the full list
The Supreme Court just handed Trump a big victory regarding his border wall
3 big health care stories to watch for in 2020