Here’s the slogan Democrats should run on: “Support Checks and Balances. Elect Democrats.” 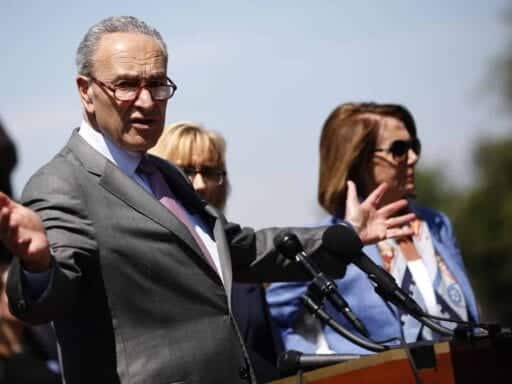 Americans overwhelmingly support checks and balances. That should be the focus of the midterms.

Democrats have a new slogan for the midterms: “For the People.”

I hate it. It’s one of those slogans that tries to mean everything and therefore means nothing. Sort of like the previous slogan, “A Better Deal” — another meaningless cliché that apparently proved inadequate to the task.

I’ve got a better one: “Support Checks and Balances. Elect Democrats”

After all, you can turn on any news channel and witness the charade. Republicans in Congress are bending over backward and upside down and sideways to figure out how to excuse away the inexcusable — siding with a foreign enemy when all intelligence experts are screaming that Russia interfered in the 2016 election and plans to again in the 2018 election.

I’m typically hesitant to invoke the “country over party” dichotomy because it’s usually meaningless (“country” typically means whatever I think is right). But in this case, it’s unusually apt. Republicans actually are being forced to choose between country and party. And party is winning.

American democracy is a separation-of-powers system, in which Congress and the presidency are independent branches, but Congress has many more powers. The problem with separation of powers in practice is that it only works with divided government. The framers thought that by spreading power across independent branches of government, they would make it hard for parties to form, and institutional allegiances would triumph and balance each other. They were wrong.

Checks and balances are extremely popular

In theory, this creates an opportunity for Democrats. That’s because checks and balances are really popular.

In a recent Democracy Fund Voter Study Group report I wrote with Larry Diamond and Joe Goldman, called “Testing the Limits Examining Public Support for Checks on Presidential Power,” we found: “Eighty-one percent of respondents say that ‘members of Congress should provide oversight of the president and executive branch, even if the president is in their same party.’” The remaining 19 percent say that “members of Congress should give the president freedom to make the decisions he feels are right for the country.”

In other words, Americans really, really like Congress as a check on presidential power.

Democrats need to win over some Republicans to win the midterms

Democrats face an imposing midterm. Over at the Upshot, Nate Cohn and Dominic Kesterton estimate that Democrats need a blue wave of epic proportions in the popular vote to overcome a tremendous disadvantage in districting. As they write, “Even a wave as powerful as those in 2006 or 2010 might not give Democrats control of the House.” At FiveThirtyEight, David Wasserman has estimated that there is almost 6-point pro-GOP bias built into the House and Senate, a “historic high.”

This is partly because of gerrymandering, but also because of geography: Democrats overconcentrate their voters in big cities, which gives them many lopsided districts, while Republicans spread out their voters more evenly.

Like it or not, that’s the map Democrats are stuck with for now, which means Democrats need to expand into Republican territory to win. (Counting on young people to turn out seems like an increasingly risky strategy — only 28 percent of young voters say they will certainly vote in the midterms, compared to 74 percent of seniors.)

That means Democrats will need to pick up the small but still sizable share of Republicans who are increasingly aghast at both how President Trump is behaving and how congressional Republicans are spinelessly failing to use the considerable constitutional authority vested in Congress to do anything about it.

“For the People”? Really? As a slogan, “Support Checks and Balances. Elect Democrats.” is far better.

It’s simple, straightforward, and understandable. You don’t have to vote for the Democrat because you like Democrats’ policies or program. With a Republican in the White House (could be Trump, could be Pence, who knows?), Democrats won’t be passing many bills into law anyway.

Tactically, it means Democrats will need to keep the focus on Trump’s capitulations to Putin and Russian electoral meddling for a few months. This shouldn’t be too hard. They can continue to demand votes on any of a laundry list of issues where Congress could act meaningfully but Republicans won’t for the reasons mentioned above.

With a slogan like this, Democrats don’t have to unify on an economic program or an immigration position. Instead, they can let individual candidates take on positions that fit their districts. A simple message like “Support Checks and Balances” puts the focus on our basic system of government, and the ways Republicans are failing to uphold it. Simple as that. It’s as American as, well, checks and balances.

Report: Pentagon goes on offensive in cyber warfare
Exclusive: internal documents show how hard it is for some immigrants to get a travel ban waiver
Charles Krauthammer was the anti-Breitbart conservative writer
Paleologos on the poll: Ask voters about Trump and get an earful, regardless of party
Your super cheat sheet to a super big week of news
Trump's 'zero tolerance' immigration policy sparks outrage in Central America