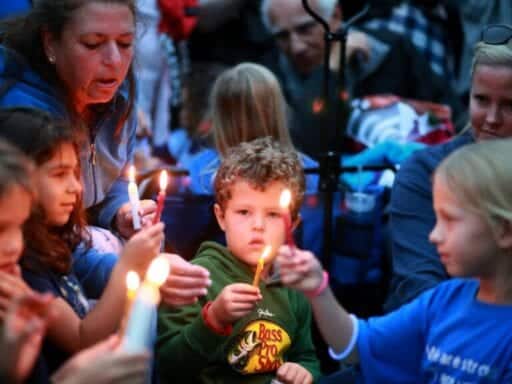 A gunman opened fire on a synagogue in California on the last day of Passover, killing one person and injuring three.

On Saturday, the last day of the Jewish holiday of Passover, a man entered a synagogue in a suburb of San Diego and opened fire on the worshippers inside.

He killed one person, 60-year-old Lori Kaye, who was present at the service to mourn her mother’s death, and injured three other people. Authorities have since arrested the suspect, who has been charged with one count of murder and several counts of attempted murder. On Monday, the suspect’s family released a statement expressing their shock and sadness for the “grief and anguish our son has caused for so many innocent people.”

The Chabad of Poway Synagogue shooting is the latest in a wave of attacks on places of worship in recent months. On Easter Sunday, suicide bombers targeted eight churches and hotels in Sri Lanka, killing over 300 and injuring hundreds more. Last month, a shooter attacked two mosques in Christchurch, New Zealand, leaving more than 50 people dead. And exactly six months ago, a man attacked the Tree of Life Synagogue in Pittsburgh, killing 11 people.

The motivations behind these attacks differ, but they share one thing in common: The attackers have tried to transform places of worship and peace into spaces filled with violence, fear, and hate. The tragic irony is that these attacks tend to have the exact opposite effect.

In the wake of the Poway synagogue attack, communities across the US and other faith groups have spoken out in support of the victims, to show their love, support, and solidarity. In an act of incredible composure and defiance, Rabbi Yisroel Goldstein, who was injured in the attack, returned to his sermon after the gunman had left the building.

“I guarantee you, we will not be intimidated or deterred by terror,” he told the Today show on Sunday. “Terror will not win.”

If you’re getting caught up on the news from this weekend, here’s what you need to know about the Poway synagogue attack: what happened, who was involved, and how people have responded in the aftermath.

On Saturday morning, a man wielding an assault-style rifle entered a synagogue in Poway, a town about 21 miles north of San Diego, during a Passover service.

Lori Kaye, who was attending the service to pray for her mother who had recently died, reportedly jumped in front of the rabbi to protect him. Kaye was shot and killed, and Goldstein was injured in both hands. A 34-year-old man named Almog Peretz and his niece, an 8-year-old girl named Noya Dahan, were injured in the attack as well.

The shooter’s gun apparently jammed, and he then left the building. An off-duty Border Patrol agent who sometimes provided security for the synagogue shot at the suspect and missed as he was driving away. According to Reuters, the suspect called police and admitted to being involved in the shooting and then surrendered on a highway nearby soon after.

The suspect is currently being held on one count of murder and three counts of attempted murder.

Who’s the suspect, and what motivated him?

Earnest reportedly published an anti-Semitic manifesto on the far-right message board 8chan hours before the attack. In the letter, which the New York Times describes as full of “racist slurs and white nationalist conspiracy theories,” he expressed his desire to kill Jewish people and wrote that his role models included Jesus Christ, Adolf Hitler, and the Tree of Life and Christchurch shooters.

It was also extremely similar in tone to the manifesto attributed to the Christchurch shooter, NBC News reported, and followed a similar “Q&A” style format.

How have people responded?

On Sunday night, hundreds of people attended a vigil at a community park near Chabad of Poway Synagogue to express their solidarity with the Jewish community. They held candles and prayed for Kaye, the woman who was killed.

President Donald Trump also condemned the attack at a rally in Wisconsin on Saturday, saying, “Our entire nation mourns the loss of life, prays for the wounded, and stands in solidarity with the Jewish community. We forcefully condemn the evil of anti-Semitism and hate, which must be defeated.”

The president also contacted Goldstein, who said that he was “amazed” to have received the phone call. In a press conference on Sunday, Goldstein said that they talked about a number of topics, including the president’s love for Israel, for around 15 minutes. “I’m really grateful to our president for taking the time and making that effort to share with us his comfort and consolation,” he said.

On Monday, the suspected shooter’s family released a strong statement decrying the attack, and expressing their shock and anguish. “Our son’s actions were informed by people we do not know, and ideas we do not hold,” they wrote, and expressed sadness that their son was “now part of the history of evil that has been perpetrated on Jewish people for centuries.” They thanked the first-responders and gave their condolences to the victims and survivors of the attack.

Statement from the family of John T. Earnest. The Earnest Family does not anticipate giving any more public statements on this matter until after the criminal case is resolved. Please direct all inquiries to their attorney, Earll M. Pott at (619) 239-8131. pic.twitter.com/81662R7Egy