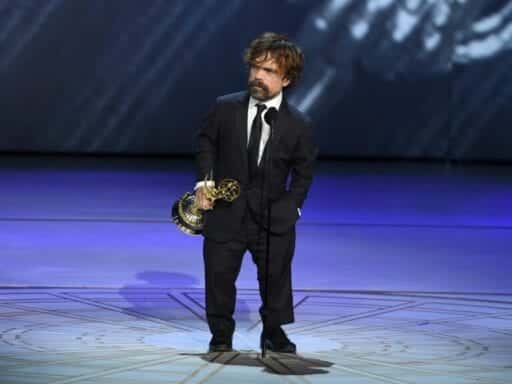 On Monday, the 70th annual Primetime Emmy Awards honored the past year’s greatest achievements in television. The night crowned a new comedy queen and reminded us that the show with the dragons is still pretty good.

Headed into the ceremony, one big question was which show would replace Veep as the winner of the Outstanding Comedy Series trophy. Veep, which has won the award since 2015, was not eligible this year as its production was delayed while star Julia Louis-Dreyfus underwent treatment for breast cancer.

Mrs. Maisel began the night with Alex Bornstein’s win in the Supporting Actress in a Comedy Series category, then saw Amy Sherman-Palladino win for both writing and directing, and closed out the evening with Rachel Brosnahan winning Lead Actress in a Comedy Series and the show winning Outstanding Comedy Series. Mrs. Maisel’s triumph made history for Amazon, which celebrated its first series Emmy win. The series took home five Emmys on Monday for a total of seven overall, as it was recognized for casting and single-camera editing at the previously awarded Creative Arts Emmys.

Elsewhere in the comedy field Henry Winkler and Bill Hader took home the Supporting Actor in a Comedy and Lead Actor in a Comedy Emmys, respectively, for their performances on HBO’s dark comedy Barry. Winkler’s win was especially notable because it was his first, and it came 42 years after his very first Emmy nomination, which he received in 1976 for playing Fonzie on Happy Days.

In the drama categories, there was a comeback story of sorts. Game of Thrones, which went into the night as the most-nominated drama with 22 nods, won Outstanding Drama Series after sitting out 2017 for eligibility reasons. Peter Dinklage was also recognized for the show, winning Supporting Actor in a Drama Series. Game of Thrones won nine awards in total, including seven trophies from the previously awarded Creative Arts Emmys.

Here’s the full list of the night’s televised winners:

Outstanding Writing for a Comedy Series

Outstanding Directing for a Comedy Series

Outstanding Supporting Actor in a Limited Series or Movie

Writing for a Limited Series, TV Movie, or Special

Directing for a Limited Series

WINNER: Ryan Murphy, The Assassination Of Gianni Versace: American Crime Story (“The Man Who Would Be Vogue”)

Lead Actress in a Limited Series

Outstanding Writing for a Variety Special

Steve Martin & Martin Short: An Evening You Will Forget for the Rest of Your Life

Outstanding Directing for a Variety Special

Steve Martin & Martin Short: An Evening You Will Forget for the Rest of Your Life

Writing for a Drama Series

David Benioff and D.B. Weiss, Game of Thrones (“The Dragon and the Wolf”)

Directing for a Drama Series

Alan Taylor, Game Of Thrones (“Beyond The Wall”)

Jeremy Podeswa, Game Of Thrones (“The Dragon And The Wolf”)

Kari Skogland, The Handmaid’s Tale (“After”)

Sterling K. Brown, This Is Us

Milo Ventimiglia, This Is Us

At Home With Amy Sedaris

The Late Show with Stephen Colbert

HBO has reportedly canceled the first prequel to Game of Thrones
President Donald Trump pushes back on border separation furor
The NBA might be returning this summer — in Disney World
2 new polls give Democrats a double-digit lead in the 2018 generic ballot
The next Democratic debate is only 12 days away
Forget cars. We need electric airplanes.