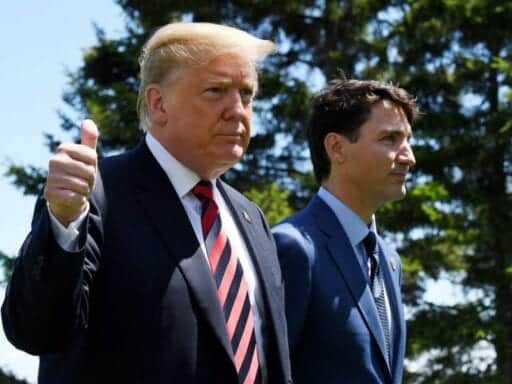 Canada and the US are trying to reach an agreement by the end of the month, but politics are holding them up.

The United States and Canada have spent the last few weeks trying to hammer out a new North American Free Trade Agreement (NAFTA) — and they don’t seem to be making much progress.

“Nothing is done until everything is done,” Canada’s Foreign Minister Chrystia Freeland told reporters on Tuesday, as NAFTA talks continued. Put another way: There’s no deal yet.

NAFTA is, of course, a trilateral agreement between Mexico, Canada, and the US that aims to reduce trade barriers. The agreement has been in place since 1994, and while its effect on jobs and manufacturing has been criticized in the past, President Donald Trump has shown particular animus for the pact, calling it one of “the worst trade deals ever made.”

The president swore he would make a new deal with Mexico and Canada, and started renegotiating the agreement in August 2017. More than a year later, that process isn’t done.

However, late last month, the US and Mexico reached a preliminary bilateral deal — without Canada. Trump threatened to leave Canada out and go alone with Mexico if Canada couldn’t get on board with negotiations, and talks took on a new urgency. In recent days, Trump has threatened to impose hefty auto tariffs on Canada that will lead to its “ruination.”

Against this backdrop, US and Canadian negotiators are under pressure to strike a deal by the end of September — one that both countries believe protects the interests of their citizens. Politics, of course, are making it harder to reach a consensus. But it’s also politics that will make it hard to kill NAFTA for good.

What the US wants: access to Canada’s dairy market

Dairy has become one of the major issues in NAFTA negotiations — and one reason why is that Trump has falsely blamed NAFTA for hurting American dairy farmers.

Canada uses what’s called a supply management system for dairy (and eggs and poultry), which closely regulates how much of each product can be produced, and places strict tariffs and quotas on those items when they’re shipped into the country.

But the US used to be able to export a type of high-protein dairy product called ultrafiltered milk, that can be used to make things such as cheese and yogurt, to Canada without any tariffs or quotas.

Canada changed that in Ontario in 2016, according to the Toronto Star. Canada’s diary industry got regulators to make their own high-protein milk products cheaper, encouraging Canadians to use domestic rather than US-made milk. Canada then began adopting the policy across the country.

After exports to Canada in this once-lucrative area began to fall in 2017, American dairy farmers grew alarmed. This new policy also got under the president’s skin. “In Canada, some very unfair things have happened to our dairy farmers and others,” Trump said in April of last year.

The US doesn’t want Canada to change up their whole supply management system, but they do want greater access to the dairy market. And while that may actually be good for Canadian consumers, it’s a politically sensitive issue in Canada.

Dairy protections also happen to be a topic in Quebec, where Canadian Prime Minister Justin Trudeau’s Liberal Party is losing ground to Conservatives in provincial elections. The party may not want to damage their tenuous position, said Sarah Goldfeder, a principal at the Earnscliffe Strategy Group and fellow at the Canadian Global Affairs Institute.

“The Conservative perspective in Quebec has always been supply management needs to stay, and the Liberals have always pushed against it and said, ‘Are we sure? We can probably live without some of this,’” Goldfeder told me. “That friction is really driving some of the discussion on dairy.”

Canada doesn’t want to look like it’s selling out its farmers, especially ahead of a crucial election. At the same time, the US has made it clear that it cares deeply about the dairy issue.

However, the US has a dairy surplus with Canada. And what’s more, experts say, the US already got a lot of dairy market concessions from Canada in the Trans-Pacific Partnership (TPP), the multinational trade agreement the US pulled out of when Trump took office.

But all that doesn’t seem to matter right now. As White House economic adviser Larry Kudlow told Fox Business last week, for the US, these recent negotiations all come down to “M-I-L-K.”

What Canada wants: Chapter 19 and cultural exemptions to stay

To get concessions on the dairy issue, the US will probably need to loosen up its stance on NAFTA’s Chapter 19.

The provision establishes a mechanism for Canadian companies to appeal disputes over unfair trade practices to an independent panel made up of representatives from each country, rather than relying on domestic courts.

The US wants to do away with this provision, but Trudeau has made it clear that scrapping Chapter 19 is nonnegotiable. “We need to keep the Chapter 19 dispute resolution because that ensures that the rules are actually followed,” Trudeau said last week. “And we know we have a president who doesn’t always follow the rules as they’re laid out.”

This chapter of the agreement has its origins in the 1980s and the original Canada-US free trade agreement, according to Chad Bown, a senior fellow with the Peterson Institute for International Economics.

For Canada, Chapter 19 is a way to balance the risks and benefits of trade with the US. They see it as a defense against protectionist trade policies, which helps insulates Canada’s economy if the the US imposes trade barriers or tariffs. With Chapter 19, Bown said, Canada wants “a way to be able to push back against that.”

Another major sticking point for Canada is that they want NAFTA to retain “cultural exemptions” for Canadian media, arts, and broadcasting.

This means that those types of cultural products won’t be treated the same as commercial goods traded through NAFTA, and Canada can better protect those industries.

The internet wasn’t really an issue when NAFTA was originally negotiated, so Canada may be looking to shore up protections there, Bown said. But at its essence, standing up for these exemptions is a symbolic way for Canada to defend Canadian culture against US encroachment, said Marc Busch, an international trade and policy expert at Georgetown University. The cultural exemption issue seems to be about Canadian identity more than anything else.

These issues may be important, but they’re not the only things under discussion. “There’s a ton of little granular things that are going to be more and more difficult to negotiate as you get closer and closer to having a final agreement,” Goldfeder said.

This is bigger than Trump and Trudeau

Freeland, Canada’s foreign minister, and US Trade Representative Robert Lighthizer have agreed not to negotiate in public. But both Trump and Trudeau have weighed in on the NAFTA negotiations, albeit in very different ways.

Trudeau has sternly laid out Canada’s priorities, while Trump has ratcheted up the rhetoric of retaliation — particularly tariffs — against Canada.

Threatening Canada might not be the most effective strategy, however. Trump isn’t particularly popular among Canadians, and the US president’s tough talk seems to have given Trudeau more leverage to push back against Washington’s demands.

“The problem with the rhetoric coming out of the United States is that the Canadians really feel like they have to stand up for Canada,” Goldfeder said. “If it was less antagonistic, I think the Americans would probably get more.”

Trump has also continued to blast NAFTA as the “worst trade deal,” even as his administration tries to renegotiate it. NAFTA is more than 20 years old, so there’s definitely a case to be made to update it, or tweak provisions. But Trump’s blustery language has arguably made it harder to zone in on the problems.

“The very notion that NAFTA is in desperate need of a re-write or a fix because it has been a disaster is just fundamentally wrong,” Michael Geist, a law professor at University of Ottawa, said.

Trump has also pushed in other ways to make a new deal happen. After announcing their new bilateral deal with Mexico in August, the Trump administration manufactured a deadline to pressure Canada to make an agreement happen by August 31.

That date passed without a deal, but Trump notified Congress under the Trade Promotion Authority (TPA) that he intended to enter into a trade agreement with Mexico — “and with Canada if it is willing.”

TPA is the law that “fast tracks” trade deals, giving the president power to negotiate trade agreements and Congress the power to approve them without adding amendments. Under the rules, the president has to give Congress 90 days notice that it’s about to enter into a trade deal, but it doesn’t have to present the final text for another 30 days after the initial notification.

So that’s why the US and Canada are working toward a new, end of September deadline. Trump submitted the US-Mexico bilateral deal to Congress under the TPA, saying he’d add Canada if it agrees to deal.

But if Canada and the US can’t make a deal, Trump wants Congress to accept the bilateral US-Mexico agreement as a NAFTA replacement.

Trump, however, may not get the support he wants. Congress, including Republicans, want Canada included in any new NAFTA, and some Democrats have even challenged the Trump administration, saying he’s violating the Trade Promotion Authority (TPA) by attempting to find a workaround.

The reason why Trump is trying to pressure Canada to make this deal happen so fast is a purely political one. Trump hopes to ink a deal while Mexico’s current president Enrique Pena Nieto is still in office, before Andrés Manuel López Obrador, his new, leftist successor, assumes the role on December 1.

US midterm elections are also approaching, and with future Republican control of the House (and possibly the Senate) in doubt, Trump would like to avoid pushing this NAFTA approval process back another year.

It’s looking unlikely, though, at this point, that he’ll get his way. And Congress isn’t the only legislative body that has to approve NAFTA — the Canadian parliament and Mexico’s legislature have to ratify it as well. And though López Obrador takes office on December 1, his majority leftist Congress has already been sworn in.

So even if the US and Canada can reach a deal in less by month’s end, three countries with distinctly different domestic political climates have to approve the plan, too.

The big question, of course, is what Trump will do if he doesn’t get his way. It might include imposing hefty, potentially devastating auto tariffs on Canada — which would be painful for US consumers and producers, too.

If Trump holds back, it’s likely that the status quo will remain. “That might actually be the best-case scenario,” Busch said. “NAFTA 1.0 lives on. NAFTA 2.0 drops from political sight.”

Ocasio-Cortez invites the US women’s soccer team to the House of Representatives
Facebook initially failed to remove a Kenosha militia page despite complaints
Supertrees: Meet Congo’s caretaker of the forest
A 39-year-old and a 4.5-year-old talk about Trolls World Tour
The other hospital workers on the front lines of the pandemic
Our misinformation problem is about to get much, much worse