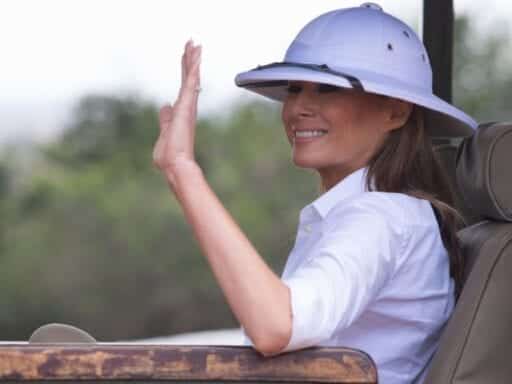 Melania Trump wore an Out of Africa-esque outfit during a trip to Kenya, complete with a pith helmet.

Melania Trump embarked on her first solo trip as first lady this week: a five-day tour of Ghana, Malawi, Kenya, and Egypt.

This excursion is standard first lady diplomacy — a way of encouraging friendly relations between the US and the countries hosting Melania and her entourage. It’s also an opportunity to promote the first lady’s “Be Best” campaign, which focuses on children’s health and well-being.

Her visit has featured visits to children’s hospitals and schools, teas with foreign first ladies, and a photo op at a sanctuary for orphaned baby elephants — typical fare for a trip of this kind. But the White House’s best efforts to use Melania to soften her husband’s image may be overshadowed by the wardrobe she packed to do so.

Throughout the week, many of the first lady’s outfits have featured muted fabrics and large, utilitarian pockets, a look that can best be described as a cross between safari chic and colonialist couture.

During a Wednesday visit to Cape Coast Castle, a fort on the Ghanaian coast from which hundreds of thousands of kidnapped Africans were shipped to the Americas as slaves, Melania wore a khaki jacket and linen pants that vaguely resembled military fatigues. She wore a similarly colored dress the following day during her trip to Malawi.

During her highly photographed Kenyan safari on Friday, she was photographed wearing an Out of Africa-esque getup complete with calf-high safari boots and a pith helmet, which, as the Guardian explained, were worn by European explorers and colonial administrators in Africa and have endured as a longstanding symbol of European colonial rule in the continent.

The US press corps has largely written off the ensembles as standard American-tourist-in-Africa garb. “Tourists in Africa, especially Americans, have come to be expected to show up in jungle-ready, beige catalogue-ordered safari gear,” wrote the Washington Post’s Africa bureau chief Max Bearak. (It’s worth noting that when Michelle Obama visited Liberia, for example, she wore a colorful printed dress that resembled her usual DC wardrobe. Hillary Clinton wore one of her trademark suits during a 1997 visit to South Africa.)

As worn by Melania Trump, these outfits are a reminder of the Trump administration’s outdated, monolithic view of the African continent and its people. Instead of eclipsing Trump’s numerous Africa-related controversies, Melania’s trip to the continent may have brought them back to the forefront.

According to Charlene Lau, a fashion historian who has previously taught at Parsons School of Design, there are several ways to read Melania’s safari wardrobe. “It is possible that inspiration for such dress is gleaned from mass stereotyping and superficial ideas of [African] nationhood,” she said in an email. “While this may be the case, these notions do have roots in colonialism, spread through the cultural imagination via literature, film, music and the visual arts.”

This, of course, isn’t the first time Melania’s clothing has stirred controversy. There was the time she wore a Gucci “pussy bow” blouse to a presidential debate just days after the Washington Post reported on her husband’s now-infamous comments about grabbing women “by the pussy.”

In May 2017, she was called out for wearing a $51,000 Dolce & Gabbana jacket — which cost just a few thousand dollars less than the average American family’s annual income — while hobnobbing with foreign leaders’ spouses during the G7 summit in Sicily. A few months after that, she wore a bomber jacket and a highly impractical pair of stilettos to visit hurricane-ravaged Houston.

And, of course, there was the time Melania donned a $39 Zara jacket that had “I really don’t care, do u?” written on the back during a visit to the US-Mexico border in the middle of the summer, during the height of the family separation crisis.

After the Zara jacket debacle, her spokesperson Stephanie Grisham suggested that reporters are reading too much into Melania’s aesthetic choices. “It’s just a jacket,” Grisham told reporters. “There was no hidden message. After today’s important visit to Texas, I hope this isn’t what the media is going to choose to focus on.”

Lau noted that it’s highly implausible someone as high-profile as a first lady would get dressed without thinking about the implications of her outfit, especially while on a diplomatic trip. “There’s no doubt that Melania Trump and her team put great thought into her style, no matter what the event,” Lau said. “The question is, does she or her stylist understand the actual cultural context for her dress, or is there a gap between perception and reality?”

We may not know what Melania and her team were going for when they selected her wardrobe for this trip, but it’s impossible to look at a white woman wearing a pith helmet while on an African safari and ignore the colonial undertones — especially when that woman’s husband is in charge of an administration whose policies actively harm those from African nations.

Taylor Swift, Demi Lovato, and why we feast on celebrity trauma
Trump brags in a tweet that he saved us from war with North Korea
This autism dad has a warning for anti-vaxxers
Trump just declared a national emergency without a confirmed defense secretary in place
The Trump administration is reportedly following industry “scripts” in rolling back oil and gas dril...
The Paycheck Protection Program failed many Black-owned businesses