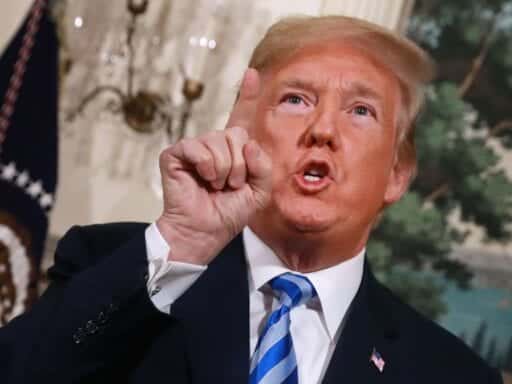 The theories range from a poorly learned lesson from his North Korea diplomacy to a seriously considered, long-term strategy.

When President Donald Trump threatens another country, we usually know why.

But in the case of his latest tweet about Iran — where he promised the country could “SUFFER CONSEQUENCES” — there’s a lot that’s still unclear.

Take when the US president infamously vowed to “totally destroy” North Korea last September during a speech at the United Nations. Trump said he would only follow through on his threat if Pyongyang kept antagonizing the US or its allies.

Trump bombed Syria on two separate occasions, and both times it was in response to a narrow, but important, concern: Bashar al-Assad’s use of chemical weapons to kill scores of men, women, and children.

The US president and the rest of his administration have made no secret of their animosity toward Iran, of course. But it’s not clear what, exactly, prompted this tweet on Sunday night, or what he was hoping to achieve.

In May, Trump’s administration withdrew the US from the Iran nuclear deal — an agreement that stipulated that the US and other countries lift sanctions on Tehran in exchange for Iranians halting their nuclear program. In June, after pulling out of the deal, the Trump administration said it would impose sanctions on all Iranian oil importers by the fall. (Officials have since moderated that demand.)

But if that’s truly what Trump was responding to, it doesn’t make much sense. After all, Iran has effectively threatened conflict with this administration before.

For example, last October, Tehran’s military chief, Gen. Mohammad Ali Jafari, said the US should move its bases out of Iran’s missile range if it planned to impose sanctions again. And Iran’s Supreme Leader, Ayatollah Ali Khamenei, urged all Muslims to unite against America and its other adversaries last April.

Even then, Trump didn’t threaten a possible war.

National Security Adviser John Bolton, who advocated for striking Iran before he joined the administration, followed up on Monday morning by noting that “President Trump told me that if Iran does anything at all to the negative, they will pay a price like few countries have ever paid before.” That’s very vague, and implies that there is no exact reason for Trump’s Twitter missive, or actual goal he’s trying to achieve with it.

So what’s really going on here?

There are three broad theories for why Trump hit “send” on his bellicose tweet.

The first, as experts Colin Kahl and Vipin Narang hypothesized in the Washington Post, is that the president learned the wrong lesson from his dealings with North Korea. Mainly, Trump thinks talking tough will eventually deescalate tensions and get the opponent to do what America wants.

But Kahl and Narang, both critics of Trump’s foreign policy, don’t think that will work. “A ‘strategy of increasing tension’ is likely to produce just that: increasing tension, kicking off a spiral of pressure, retaliation and military threats,” they wrote in May. If this is actually why Trump pushed back on Rouhani so hard, Trump probably won’t like the result.

The second theory is Trump wants to distract the public and the media from his poor meeting with Russian President Vladimir Putin last week. During the post-meeting press conference on July 16, Trump sided with Putin when the Russian president denied that Russia interfered in the 2016 presidential election, even though the US intelligence community assessed that it did.

That led to arguably the worst foreign policy week of Trump’s presidency, in which the administration failed to convincingly walk back Trump’s comments and curb the tide of widespread criticism, including from Republican leaders. But if he gets people to focus on Iran — especially GOP members of Congress — then maybe he can make everyone forget about his really bad Russia week.

The third and final explanation, made mostly by Trump’s foreign policy supporters, is that it was actually part of a longer-term plan.

“The administration’s goal is to increase the pressure on Iran in order to force it to the table to renegotiate a better nuclear deal,” Matthew Kroenig, an Iran expert at the Atlantic Council think tank in Washington, told me. “Better terms will require more pressure, so Trump’s tweet, tougher sanctions, and calling out Iran’s human rights abuses are all part of this broader strategy.”

Trump has said many times he wants a better deal with Iran, one in which Tehran agrees to never have a functioning nuclear program. Trump’s tweet may be a shot across the bow, warning Rouhani and others that Trump would consider some kind of military option should they not comply with his wishes.

When I asked Kroenig if he thought the tweet was a good idea, he had this to say: “On balance, yes. Clear threats are often an essential component of successful diplomacy and contribute to international peace. The tweet helps to ensure that Iran’s leaders do not miscalculate.”

Regardless of which theory is correct, the big worry is that the president’s threat could potentially lead to war. And that outcome, my colleague Zack Beauchamp points out, “would kill thousands of people, destroy whatever vestiges of political stability remain in the Middle East, and potentially wreak havoc on the global economy — all while likely failing to permanently end Iran’s nuclear ambitions.”

It’s possible that Rouhani’s speech angered Trump enough to motivate him to send a strong message in response. Still, it’s jarring to see the president respond with a statement that could lead to war, regardless of why he sent it.

“I am absolutely sitting here offended”: Cedric Richmond calls out Republicans for distracting from ...
The Innocence Files explores wrongful convictions. It’s the best kind of true crime.
The past 48 hours of Justice Department political shenanigans, explained
The waves of feminism, and why people keep fighting over them, explained
Understand the unfolding coronavirus outbreak with these Vox podcast episodes
A guide to the 2018 midterm elections