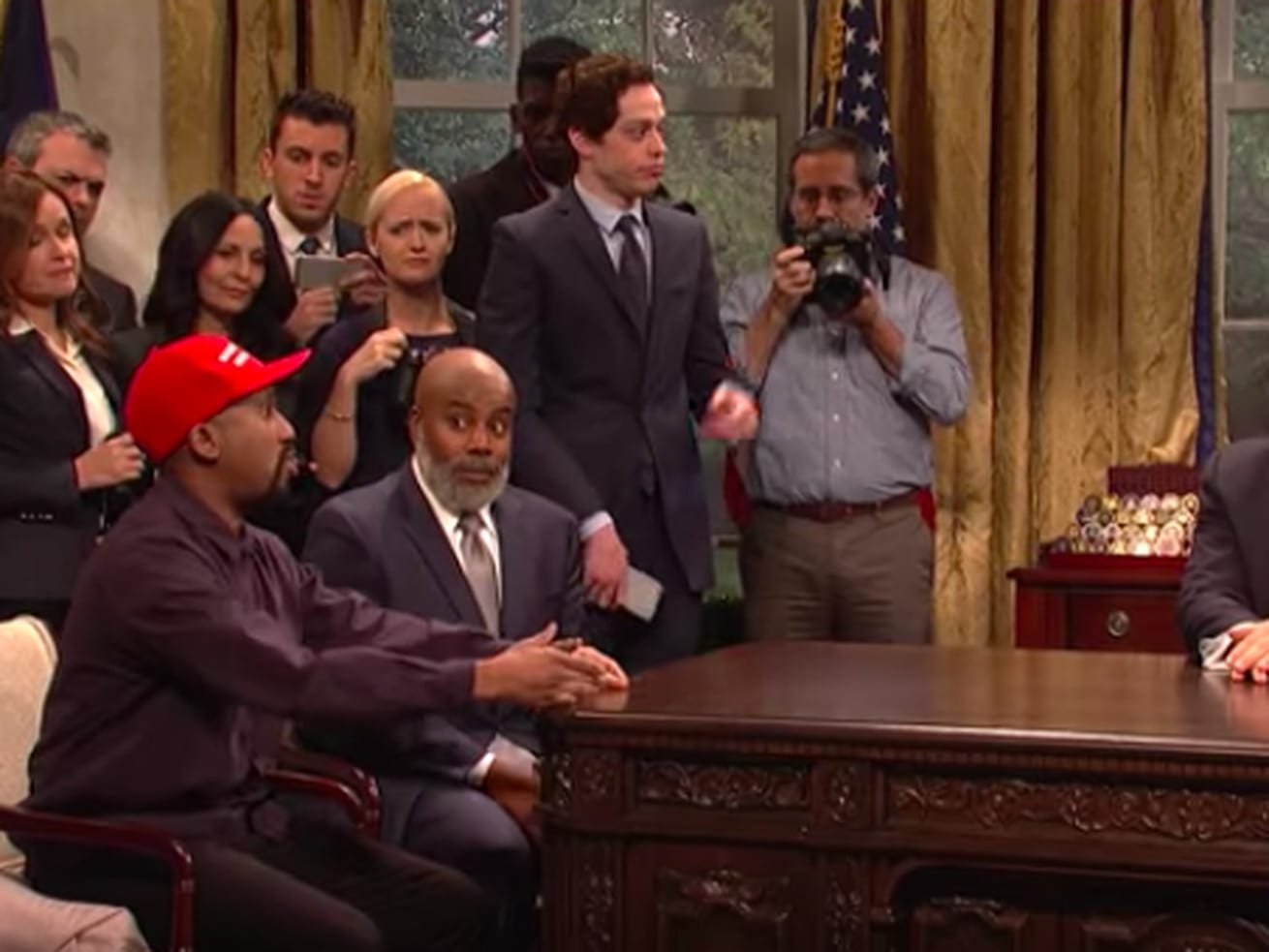 Alec Baldwin made his first appearance as President Donald Trump on this season’s Saturday Night Live over the weekend — in a cold-open spoof of the president’s meeting this week with rapper Kanye West.

“Thank you all for joining us today for this important discussion,” Baldwin’s Trump said at the opening. “This is no way a publicity stunt. This is a serious private conversation between three friends, plus 50 reporters with cameras.”

Redd’s West said he had flown to the White House “using the power of this hat,” gesturing to the Make America Great Again hat he was wearing. He then launched into a rant similar to the real-life speech he gave this week in which he discussed mental health, job growth, and the 13th Amendment, calling it a “trap door.”

“Let me begin with the idea that time is a myth,” Redd’s West said.

As he continued, Baldwin’s Trump’s inner monologue could be heard in a voiceover. “Oh, this guy might be cuckoo,” he thinks. “I’ve been in a room with Dennis Rodman and Kim Jong Un, and they made a lot more sense than him.”

As Redd’s West goes on, mirroring Trump’s own declarations that he’s a “stable genius” with the “best words,” Baldwin thinks, “Oh my God, he’s black me!”

The skit also recreated the moment this week that cameras captured West typing in his phone password: 000000. “His password is six zeros?” Baldwin’s Trump thinks. “Well, at least now I feel a lot better about my password — 80085, aka BOOBS.”

Baldwin’s Trump wraps up the meeting, saying, “And let’s remember the big lesson today: that black people love me. They love me way more than they love Alec Baldwin.”

He hugs Redd’s West, checks to make sure he still has his wallet, then tells him, “I love you Kanye, we have a lot more in common than people know: We’re both geniuses, we’re both married to beautiful women and we’ve both definitely been recorded saying the n-word.”

Before the end of his visit, Kanye summarizes his main points for Trump. #SNL pic.twitter.com/knuORxTgzP

Saturday’s skit drew from a formula SNL has used for other cold opens this season: mimicking a real-life news event and including bits that are pretty true to reality. This season’s premier depicted Brett Kavanaugh’s angry, emotional performance before the Senate Judiciary Committee. He was played by Matt Damon.

This weekend’s episode was hosted by late-night comedian Seth Meyers, a former SNL writer who used to host Weekend Update. He appeared on Saturday’s Weekend Update and revived his Really!?! segment, also about West and Trump in the Oval Office.

At one point in the segment, a picture of West and Trump embracing appeared on the screen. “It is so rare that you can see black people and white supremacists betrayed in the exact same moment,” Meyers remarked.