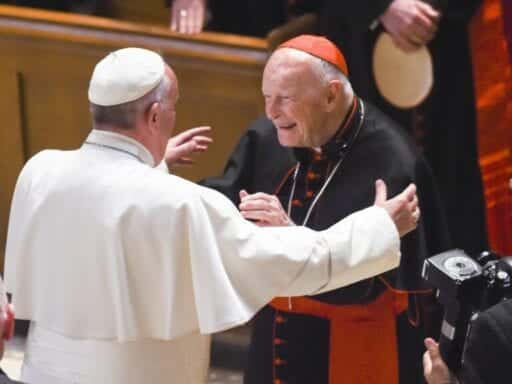 Cardinal Theodore McCarrick, former archbishop of Washington, DC and a prominent figure in the United States Catholic Church, has stepped down amid accusations of sexual abuse. Pope Francis accepted his resignation from the College of Cardinals on Friday evening.

McCarrick, 88, has been at the center of a growing scandal within the church over allegations of abuse with minors and adult men. In June, the church suspended McCarrick from ministry after finding credible allegations that he sexually abused a minor 47 years ago while he was a parish priest in New York. McCarrick said he was innocent, but since then, multiple other reports have surfaced.

Upon accepting McCarrick’s resignation, Pope Francis ordered him to seclusion to observe “a life of prayer and penance until the accusations made against him are examined in a regular canonical trial.”

The scandal surrounding McCarrick and his resignation has stunned the US Catholic Church. While he retired as archbishop in 2006, he had stayed active as a prominent diplomat of the church. According to the Washington Post, McCarrick is the highest-ranking US Catholic clergy member to be removed from ministry because of sexual abuse allegations.

The allegations against McCarrick have mounted

The man whose allegations sparked the scandal says that the cardinal’s abuse began in 1971 when McCarrick put his hands in the boy’s pants during preparations for a Christmas service. He was 16 at the time. Then in 1972, McCarrick allegedly cornered him in a bathroom and again tried to touch him.

An attorney for the accuser, whose identity has not been made public, told the New York Times that McCarrick told the boy not to tell anyone about the incidents.

McCarrick denied the allegations. “While I have absolutely no recollection of this reported abuse, and believe in my innocence, I am sorry for the pain the person who brought the charges has gone through, as well as for the scandal such charges cause our people,” he said in a statement in June after he was suspended.

The Archdiocese of Newark, where McCarrick served as archbishop before coming to Washington, said on the same day of his suspension that it and another diocese had received three allegations of sexual misconduct with adults decades ago, two of which resulted in settlements. And the Times and the Washington Post spoke with another man who said that McCarrick abused him for nearly 20 years, starting when he was 11 years old.

The Catholic Church has been hit with a string of sex abuse scandals in recent years. In May, 34 Chilean bishops resigned over a sexual abuse scandal and cover-up there. The same month, Australian archbishop Philip Wilson was convicted of covering up child sex abuse, and the month before, Cardinal George Pell of Australia was ordered to stand trial on multiple charges of abuse.

Trump and the Navy are on a collision course
State Department bans NPR reporter from traveling with Pompeo after testy interview
Is It Safe to Eat at Restaurants Yet?
Melisandre’s return to Game of Thrones, explained
John Hickenlooper just clinched a key Senate seat for Democrats in Colorado
Kamala Harris: “I may be the first woman to hold this office. But I won’t be the last.”