Hillary Clinton and Helen Keller could soon be out of Texas classrooms. Moses gets to stay in. 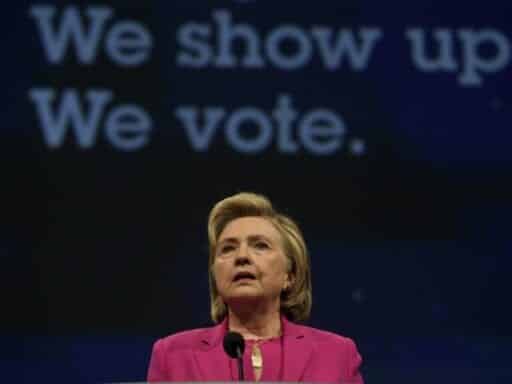 The Texas Board of Education’s vote to revise its curriculum is raising eyebrows.

Hillary Clinton was the first woman to become the nominee of a major United States political party for president. She served as first lady, secretary of state, and US senator. The Texas State Board of Education thinks she should, literally, be dropped from their history classes.

The Texas education board has raised eyebrows in recent days after the Dallas Morning News reported a vote it took on Friday to “streamline” social studies curriculum in public schools. The board took a preliminary vote to make a number of changes to curriculum, including scrapping mention of Clinton and Hellen Keller from sections on citizenship and removing a phrase referring to the “optimism of the many immigrants who sought a better life in America.” They also voted to reinsert references to “Judeo-Christian” law, Moses’ influence on the writing of the US’s founding documents, and a reference to the “heroism” of the Alamo’s defenders.

Teachers won’t be barred from discussing the figures scrapped, they just won’t be part of the required curriculum. A final vote on the changes will take place in November. The decision will affect Texas’s 5.4 million public school students, though it won’t change the state’s textbooks at this time.

Two teachers from the group of board-nominated volunteers who recommended the changes told the Dallas Morning News that the state required students to learn about so many historical figures “it resulted in rote memorization of dates and names instead of real learning.” To decide whom to eliminate, they ranked “essential” figures by asking questions such as whether the person “triggered a watershed change,” was from an “underrepresented group,” or had an impact that would “stand the test of time.”

They were ranked on a 20-point scale: Clinton got 5. Keller, a deaf-blind woman who was a political activist and author and graduated from college, got 7. The group who recommended dropping the activist from third-grade curriculum, saying she “does not best represent the concept of citizenship,” and instead military and first responders do.

Scrapping Keller will save teachers 40 minutes and Clinton 30 minutes, according to the Dallas Morning News.

There’s long been a spotlight on Texas education policy. It’s a populous state and a large market, meaning decisions made there affect a lot of children’s learning. It’s also not new to controversy. Per the Dallas Morning News:

Five years ago, members clashed over whether science books should have to teach an alternative to evolution. In 2014, math standards were revised, drawing criticism from parents and teachers. And earlier this year, a new Mexican-American studies course was the subject of the latest culture war.

Its textbooks have been a specific point of focus. As CBS News notes, in 2013, Christian groups fiercely opposed the approval of textbooks that included evolution and not creationism. Thanks to the size of Texas’s schoolbook market, publishers often sell books prepared for publication there in other states as well.

But, as mentioned, Friday’s decision won’t affect textbooks or educational materials, the Dallas Morning News reports. So if the changes are confirmed come November, they wouldn’t have the same nationwide ripple effects as a change to students’ history books. It’s not clear whether the decision might affect what textbook publishers decide to include down the road.

The Texas State Education Board didn’t accept all of the recommendations — for example, the working groups had also recommended getting rid of multiple references to “Judeo-Christian,” including in a section on influences of America’s founding, and the board rejected that. The board also disregarded the recommendation Moses be dropped as a figure who influenced the country’s foundations. Instead, it dropped English philosopher Thomas Hobbes.