Home care workers have a lousy job. A new Congressional bill aims to change that. 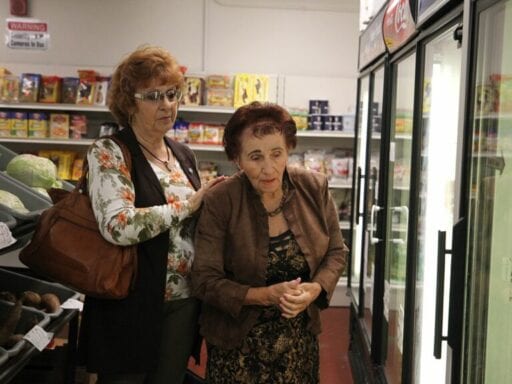 Congress wants to turn caregiving into an actual career.

Congress has a plan to make one of the toughest jobs in America a little less lousy.

House and Senate Democrats will introduce a bill Thursday to create career paths for home health aides, one of the most in-demand jobs in the US.

The bill, called the CARE Opportunity Act, would provide grants to about a dozen organizations or states to come up with solutions to a vexing problem: More and more elderly Americans need caregivers, but the job offers such low pay and so little protection that few people are willing to do it for long. It’s also emotionally and physically exhausting.

“It’s a crisis now and will explode in the decades to come,” said Robert Espinoza, vice president of policy for PHI, a national nonprofit that advocates for direct care workers and their clients.

Families and providers are scrambling to find caregivers at a time of record-low unemployment, Espinoza says, so attracting more people to the profession is critical for millions of elderly Americans who need help with everyday tasks. That ranges from the simple — helping someone brush their teeth — to the complex, such as feeding an immobile client or calming frustrated patients who are losing their memories.

The bill, a copy of which was shared with Vox, comes after Vox and other media outlets reported on the widespread shortage of home caregivers. Americans are living longer with chronic diseases, and they can’t live entirely on their own. Right now there are 6.3 million adults over the age of 85. That number is expected to more than triple to 19 million by 2050.

The bill would fund projects to create a sustainable career path for home care workers, who often look after clients with dementia or Parkinson’s. That could include apprenticeships, on-the-job training, professional development, or mentoring programs. The bill doesn’t include a dollar amount; that’s something members of Congress would have to agree on. The point is to invest in one of the fastest-growing jobs in America, a service that nearly all Americans will one day need.

“Direct care workers provide critical services to our nation’s seniors and individuals with disabilities,” said Rep. Bobby Scott (D-VA), who introduced the House version of the bill, in a statement to Vox. “As one of the fastest-growing occupational sectors in the country, we must make meaningful investments to ensure that this field attracts talented professionals and provides advancement opportunities for those dedicated to the profession.”

Home caregiving is the future of work

According to the latest estimates from the Bureau of Labor Statistics, the US economy is expected to create about 1.2 million new positions for home caregivers by 2026 — a 41 percent increase from the 2.9 million personal care and home health aides working in 2016.

Aging baby boomers and expanded Medicaid coverage have led to the surge in the need for workers to care for the sick and elderly in their own homes. But these positions, which require minimal training and no college degree, are among the lowest paid in the country.

The median annual salary for a home health aide was $24,200 in 2018, above the $16,460 federal poverty level for a family of two. That’s about $11.57 an hour. Cooks, janitors, and farmworkers make more than home care workers do, and they aren’t caring for the sick and elderly.

In interviews with Vox, economists shared various reasons wages are so low for such a high-demand job. After all, basic economic theory suggests employers will pay more when they can’t find workers.

However, jobs that require emotional and social skills are valued less in the labor market, some economists say. Another theory suggests that caregiving is a business with low profit margins. One economist believes the labor shortage may be overstated and that there’s actually a bigger pool of low-wage workers than government data suggests.

But there’s one underlying problem they all agreed on: demographics. Home health care workers are overwhelmingly women, people of color, and immigrants with low educational attainment. Randy Albelda, an economics professor at UMass Boston, says research clearly shows that occupations dominated by women are lower paid.

But it’s not just about low pay. The majority of home care workers get zero benefits.

About 88 percent of domestic workers don’t get paid time off, sick time, employer-sponsored health insurance, or any other benefits.

Beyond that, home care workers are an easily exploitable workforce. Because of the job’s roots in slave labor, these workers have long been excluded from US labor laws. Live-in caregivers are not entitled to any labor protections under federal law, like overtime pay or a minimum wage. Neither are caregivers who spend less than 20 percent of their job helping clients do basic tasks. None are protected from racial discrimination or sexual harassment. They have no right to a safe workplace and, in some cases, they have no collective bargaining rights.

It’s no wonder the caregiving profession has one of the highest turnover rates in the country. In interviews, several home health aides described their work as emotionally and physically draining, with few rewarding moments.

“I pray every day for change,” Deborah Brockington, a 57-year-old home health aide in Raleigh, North Carolina, told me earlier this summer.

The stakes are high.

The new bill is just one solution

The problems health aides face could compromise not only the future of American work but also the state of care for the aging population. If unemployment keeps dropping and caregivers discover better job options, they won’t stick around for long. Yet few policymakers have attempted to address the problems in a system rooted in racism and sexism.

Clearly, the CARE Opportunities Act won’t solve all the problems home care workers are facing. It won’t directly raise their wages or provide them with paid sick days. And it doesn’t close the loopholes in US labor laws that have left domestic workers unprotected.

It does, however, give labor groups and government agencies a lot of leeway to figure out what might work, like a mentoring program or an apprenticeship. States, labor unions, colleges, and nonprofit groups that have experience offering services to caregivers are eligible for the grants.

Maybe, just maybe, they can find a way to make home health aides view their jobs as more than just a paycheck.

Silicon Valley billionaires’ strange new respect for Elizabeth Warren
Why Iran’s coronavirus outbreak may be worse than you think
Obama says that Americans are seeking “improvement” not “revolutionary” change
What Nancy Pelosi said about the 25th Amendment
Trump’s RNC speech was a mess. But the optics of it were powerful.
Republicans don’t want Mitt Romney to save them from Trump