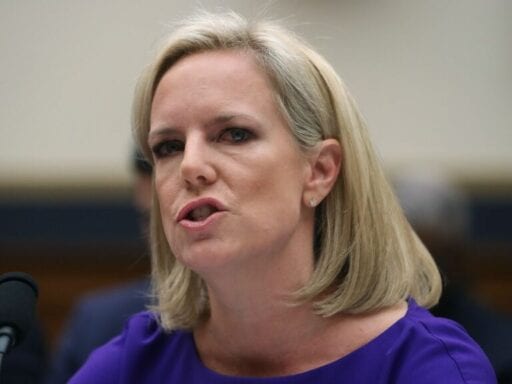 Nielsen was the most aggressive DHS secretary in history. It wasn’t enough for Trump.

Homeland Security Secretary Kirstjen Nielsen submitted her resignation to President Donald Trump Sunday night, in an unexpected move that appears related to the president’s ongoing rage over the number of Central American families and asylum seekers coming into the United States.

Kevin McAleenan, the head of Customs and Border Protection, will serve as acting DHS secretary. It’s not yet clear whether Trump will formally nominate a successor to Nielsen in the near future.

Nielsen, the sixth head of the Department of Homeland Security and Trump’s second appointee (she was confirmed in December 2017 after John Kelly left to become White House chief of staff), has arguably been the most aggressive secretary in the department’s short history in cracking down on immigration — with her legacy likely to be defined among progressives by the “zero tolerance” prosecution policy of late spring and early summer 2018 that resulted in the separation of thousands of families at the US-Mexico border.

None of it appears to have been enough for Trump.

Nielsen’s resignation was preceded on Thursday night by the abrupt withdrawal of the nomination of acting Immigration and Customs Enforcement director Ron Vitiello to formally lead the agency, with Trump telling reporters Friday morning that he wanted to go in a “tougher direction.” While it’s not yet clear whether Trump requested Nielsen’s resignation or not, it certainly appears as if that “tougher direction” is extending to a new DHS secretary. (Earlier in the week, it was reported that Trump was considering a White House-based “immigration czar” to coordinate various immigration-related agencies — most of which are under the aegis of DHS.)

Trump has taken out his frustrations on Nielsen before. In spring 2018, he reportedly threw a tantrum at her during a cabinet meeting over why she didn’t just “close the border” (a threat he brought back last week, though Nielsen and other officials made clear he would only be able to close ports along the border). After the 2018 midterms, he reportedly decided to ask for her resignation as part of a post-election Cabinet shakeup, but appears to have changed his mind.

But with nearly 100,000 migrants apprehended by Border Patrol agents along the US-Mexico border in March, Trump is yet again ruminating angrily and obsessively over immigration, riffing in speeches about telling migrants “we’re full” and “go back.”

Nielsen couldn’t make that happen, because no one could, because it’s impossible. The US can’t — even with a wall — physically prevent the entry of unauthorized immigrants onto US soil. And once on US soil, they have certain rights — including the right to request asylum.

Kirstjen Nielsen has done more than any of her predecessors to crack down on immigration. And with Trump’s Friday comments about a “tougher” direction, it’s hard to escape the conclusion that Nielsen is the first DHS secretary to leave because the president thinks she hasn’t done enough.

The most aggressive immigration hawk in DHS history

To Trump’s critics, Nielsen will likely be remembered for presiding over the widespread separation of children from their parents at the US-Mexico border in late spring and early summer 2018, under a “zero tolerance” policy of prosecuting first-time border crossers for illegal entry.

Most of the more than 2,700 families who were separated when a federal judge ordered reunification in late June 2018 have since been reunited, though arguments continue about what to do with the unknown number of families who weren’t initially covered by the 2018 order because the children had already been taken from government custody and placed with sponsors (usually relatives) in the US.

But viewing Nielsen’s tenure through the lens of family separation — the rare policy on which Trump backed down instead of doubling down — risks drawing precisely the wrong conclusion. She isn’t leaving because she was too tough on immigrants for Trump. She’s leaving less than 72 hours after Trump said he wanted to go in a “tougher direction” with his immigration policy.

The question is whether Trump means simply rhetorically tougher — or whether he is genuinely in denial about the reality that Nielsen was, in terms of policy, as tough as he is likely to get.

Under Nielsen, the Department of Homeland Security has taken several unprecedented steps to crack down on asylum and migration at the southern border. Some of them have been held up in court; others remain in effect.

Nielsen signed the memo endorsing zero tolerance, and acknowledging that family separation would be the consequence thereof. (Documents later uncovered by Sen. Jeff Merkley (D-OR)’s office showed that in December 2017, administration officials were arguing for zero tolerance because it would result in family separation.) She didn’t pilot the practice — that happened under predecessor Kelly — but she instituted its widespread use, despite a lack of record-keeping between agencies that made it extremely difficult to reunite families after the June 2018 judicial order.

Nielsen formally made the request for the deployment of thousands of National Guard units and active-duty military to the border (many for no obvious purpose), and for billions in emergency funds for the construction of Trump’s border wall. She presided over a “hardening” of ports of entry in late 2018 that culminated in Border Patrol agents firing tear gas canisters into Mexico during a migrant march, hurting children and parents.

Nielsen also presided over the Trump administration’s effort to ban people who crossed into the US between ports of entry — committing the misdemeanor of illegal entry — from seeking asylum. That ban, while quickly put on hold by a judge, would have affected the overwhelming majority of current migrants.

At the same time, DHS routinized the practice of limiting the number of people allowed to present for asylum legally at ports of entry.

Nielsen also appears to be the architect of the Migrant Protection Protocols (also known as “Remain in Mexico”) under which hundreds of Central American asylum seekers have been sent back to Mexico to wait for their U.S. immigration court dates. The policy, which rolled out slowly in January but has expanded rapidly in the last few weeks, is the closest thing the Trump administration has done to fulfilling Trump’s threat of “We’re full, go back.”

And Nielsen has presided over new records in immigration detention. Despite Congress telling DHS, repeatedly, to reduce detention to stay within its budget, the number of detained immigrants has grown nearly 25 percent — from slightly over 40,000 in fall 2018 to 50,000 in early 2019.

Nielsen’s tenure as secretary was defined not by these actions themselves, but by the force that motivated all of them: the building frustration and rage of Donald Trump at the fact that people continued to enter the US.

During the first few months of 2017, apprehensions at the US-Mexico border plummeted from what were already historically low levels of border crossings. Trump took personal credit and held it up as proof that all it took was a tough-talking president to secure the border once and for all.

He was half-right, and he’s been bedeviled by the other half, the “once and for all” part, ever since. Because Trump decided to measure the success of his immigration policy in whether or not people were trying to enter the US at all — not in how many were being deported, or allowed to stay, or anything else — he set himself up for failure.

It really does appear that the early 2017 lull in apprehensions was a reaction to Trump taking office. But people both within and outside the government understood at the time that the absurdly quiet border of Trump’s first months wouldn’t last, because for a year — through Kelly’s tenure and the beginning of Nielsen’s — tough talk was all the Trump administration had to offer.

This wasn’t a failure of political will on Kelly’s part. It was a belated reckoning with reality: The low-hanging fruit of deterrent immigration policies had been picked a long time ago.

US immigration law is a balance between the desire to minimize unauthorized entry into the United States and the desire to protect vulnerable people who may be fleeing harm and persecution. Both US and international law prohibit the US from refusing entry to people who are in danger of prosecution in their home countries; both US statute and court settlements offer extra due-process protections to asylum seekers, children, and families.

Trump’s anger at Nielsen is really anger at this delicate balance. For the past year, the US has tried to do as much as it can to push policy toward enforcement over protection — with the political and legal resistance that might be expected when tough problems are met with blunt solutions.

But its ideas — at least the ones that haven’t yet been struck down in court — haven’t been enough.

The administration hasn’t yet been able to find a way to guarantee that someone who comes to the US without papers has no chance of staying. Short of that, no policy crackdown will persuade someone desperately fleeing her home country that it’s not worth it to try to come to America.

And mass deterrence — fewer people getting caught by Border Patrol because fewer people want to set foot in the US without papers — is the only outcome Trump has set himself up to accept.

Trump’s new favorite tropes — the idea that the US needs to “get rid of judges” (which doesn’t reflect immigration hawks’ actual frustrations with the asylum system) and should just start telling migrants they can’t come in — simply don’t reflect a policy that a future Homeland Security secretary could put into effect.

If Trump wants a DHS secretary who looks the part of a law enforcement official, McAleenan — a career border officer — is a better fit. If he wants someone who can talk tough in front of the cameras, McAleenan might not be a good fit for exactly the same reasons — he hasn’t been as willing to blame either Democrats or migrants themselves for the current situation at the border as other Trump officials, including Nielsen.

Trump could nominate someone more rhetorically aggressive — like occasional adviser Kris Kobach — but he could face an uphill battle in the US Senate.

But if Trump wants a DHS secretary who will stop people from setting foot on US soil, none of these options will satisfy him. Neither will anyone else.