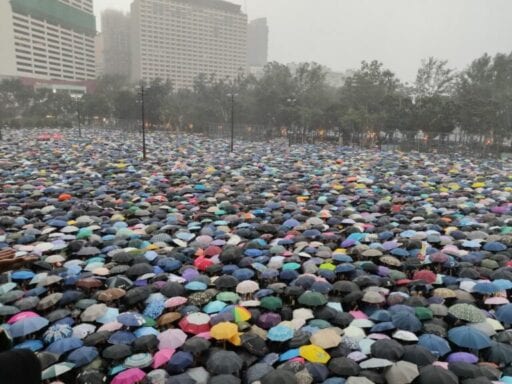 Hundreds of thousands of Hongkongers took to the streets Sunday to demand governmental reforms amid military threats from Beijing, the specter of mob violence, and increasing pressure from local police.

Despite heavy rain, threats from Beijing, and weeks of clashes with the police, hundreds of thousands of protesters marched through the streets of Hong Kong on Sunday for the 11th weekend in a row.

The huge turnout for the demonstrations — which began as an objection to a controversial extradition bill and have since evolved into a broader call for greater political freedoms — suggests that the threat of a military crackdown by the state has not caused the protest movement to lose momentum.

Protesters first gathered in Victoria Park, the starting point for several marches in June. The crowd was reportedly a mix of old and young Hongkongers, and filled with families. The protesters then marched through Hong Kong’s Central district — in defiance of a police ban — clogging up streets and jamming up traffic and public transportation. At certain points the lines of protesters stretched for miles.

There were questions about what turnout might look like after an especially tense week for protesters, but the New York Times estimates that Sunday’s protest could be the biggest demonstration in weeks.

Protesters carried out sit-ins at Hong Kong’s airport last week, partially in response to video footage of Hong King police brutalizing a protester during an arrest. The sit-ins forced the cancelation of hundreds of flights and led a two widely-publicized moments of violence: one in which some protesters attacked a police officer, and another in which some protesters took two men from mainland China hostage, believing them to be undercover officers, and assaulted them. (Some protesters apologized for the episode.) Beijing condemned the incident as “close to terrorism.”

Some accused the protesters of having gone too far, and there were questions over whether the incidents at the airport would depress turnout during this weekend’s demonstrations. But Grace, a 26-year-old Hongkonger at the protests on Sunday, told Vox that protesters dismiss the controversy as “drama set up by the airport authorities” and that ultimately clashes at the airport have energized protesters.

“I would say protesters are furious, and [that the airport protests] encouraged more people to be here today,” she told us. She also said the response to the airport controversy and Beijing’s increased shows of military force at the Hong Kong border have pushed many protesters to demand more sweeping reforms: “After the [airport] incident, more protesters are eager to shout out, ‘Revive Hong Kong, revolution of the time!’ which most protestors didn’t agree with before.”

Obstacles for protesters go well beyond the controversy surrounding the airport incidents. Beijing is growing impatient with the protests, calling them “the work of the US” and has stationed several thousand troops in Shenzhen near the mainland’s border with Hong Kong. That paramilitary force conducted very public exercises in the area last week.

For now, that force — and the 6,000 People’s Liberation Army troops routinely stationed in Hong Kong — have not moved against protesters, but in recent weeks, Hong Kong police have been increasingly inclined to use force against demonstrators, and have made over 700 arrests. And protesters and residents’ complaints over police use of tear gas in subway stations and nonlethal force that has nevertheless left demonstrators injured (one woman’s eye was ruptured last Sunday) have only increased tensions between civilians and officers. Protesters have taken to decrying the police at protests, and have also called on their local government to rein in officers they see as being overly quick to employ force.

Protesters have also had violent showdowns with pro-establishment groups, including with bands of mysterious white-clad individuals (demonstrators typically wear black) who many suspect to be associated with the city’s triad criminal gangs.

What demonstrators are fighting for

Sunday’s march was organized by the Civil Human Rights Front, the same group that has organized many of the mass protests since they began. The group says that marches will continue until their demands are met, which include a complete retraction of a bill that wold allow Hongkongers to be extradited to mainland China, universal sufferage to elect Hong Kong’s leaders, and amnesty for all arrested protesters.

As Riley Beggin has explained for Vox, the protesters’ grievances and objectives have morphed over time:

Debate on the bill was postponed indefinitely due to the protests, but the demonstrations have continued as a platform for citizens to push back against what they call “police brutality” at the protests, Hong Kong Chief Executive Carrie Lam’s dismissal of protesters as rioters and “stubborn children,” and Beijing’s growing influence in the city’s politics.

The question of Beijing’s influence over Hong Kong’s political affairs is a major one. As Rachel Withers has explained for Vox, historically Hong Kong has a unique degree of freedom from Beijing’s government, and Hongkongers are reluctant to give that up.

While the protests have expanded in scope, demonstrators have not lost sight of the fact the extradition law that set off the protests has only been shelved rather than completely removed from consideration. Jason, a protester and 30-year-old finance professional, told Vox the protest won’t end before “the complete withdrawal of the bill.”

The protests have now gone on for 11 weeks, and neither Hong Kong’s local government nor party officials in Beijing have shown any willingness to grant protesters any additional concessions.

As tensions rise, a number of US lawmakers have called for bipartisan legislation designed to pressure Hong Kong to align with protesters and to push back against creeping influence from Beijing. Rep. Jim McGovern (D-MA) and Sen. Marco Rubio (R-FL) reintroduced the Hong Kong Human Rights and Democracy Act earlier this year, a bill that would make it harder for Hong Kong to maintain its special trade status with the US if does not maintain a sufficient degree of autonomy from mainland China.

You Wenze, a spokesman for China’s ceremonial legislature, has condemned criticism from American lawmakers as “a gross violation of the spirit of the rule of law, a blatant double standard and a gross interference in China’s internal affairs.”

The European Union has called for protesters and government authorities to enter talks in order to prevent further escalation.

“It is crucial that restraint be exercised, violence rejected, and urgent steps taken to de-escalate the situation,” the European Union’s High Representative Federica Mogherini said in a statement. “Engagement in a process of broad-based and inclusive dialogue, involving all key stakeholders, is essential.”

Protesters are showing no signs of fatigue. In fact, Grace and Jason both spoke of expansions to the movement that go beyond street demonstrations — “Aside from walking out to the street, we are striking Beijing economically,” Grace said. “It’s a change in battlefield.”

“Chains and shops are already being affected by their perceived or expressed political stance with the current protests. People are boycotting shops because of the ultimate owner’s stance or what they’ve said about the protests,” Jason said. “Even movies are being boycotted,” he added, alluding to the recent #BoycottMulan campaign — a push to boycott Disney’s upcoming Mulan remake due to its star’s support of Hong Kong’s police and her criticism of the city’s protesters — something Grace also spoke of.

As demonstrations expand and weekly marches continue, protesters and their government appear to be at an impasse. Since Beijing is not yet inclined to use military force to quash protests, it’s unclear what kind of event might trigger a sweeping crack down.

But she said she is unafraid of that happening. “[That would] be the endgame,” she said. “We could foresee that. Protestors are not afraid of that since it will definitely bring US into the game.”

And either way, Grace said the protests will not stop: “For protestors, we will continue to fight even after October 1.”

The five-day workweek is dead

For women, remote work is a blessing and a curse