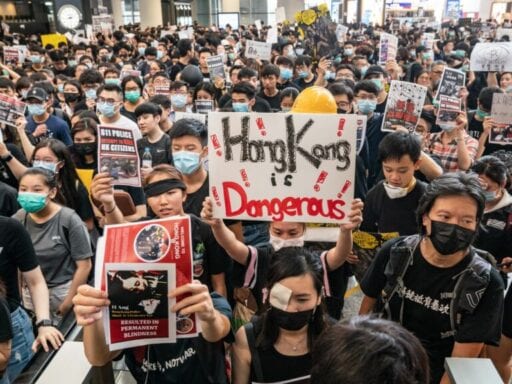 What began as a targeted protest against a controversial bill has become a battle for the future of Hong Kong.

The Hong Kong protests began in June 2019 as a targeted demonstration against a controversial extradition bill that could send Hong Kong residents to mainland China to be tried in court, but they’ve since transformed into what feels like a battle for the future of Hong Kong. Protesters are not just fighting their local government — they’re challenging one of the most powerful countries on earth: China.

Hong Kong’s chief executive, Carrie Lam, said the bill is intended to prevent Hong Kong from becoming a safe haven for fugitives. But opponents fear it would expose Hong Kong to China’s flawed judicial system and lead to further erasure of the city’s judicial independence.

Initially, Lam was determined to move forward with the bill. But after a series of massive protests, she announced she would “indefinitely suspend” it. Protesters are not accepting the suspension, however, and are demanding its full withdrawal — and calling for Lam’s resignation.

A few of the protests have stood out. On July 1, the anniversary of the British handover of Hong Kong, protesters stormed and vandalized the Legislative Council. A citywide strike shut down transportation in Hong Kong on August 6. Protesters put on a fun laser show on August 8 after police arrested a student for purchasing threatening lasers. On August 12 and 13, demonstrators took over the Hong Kong airport, leading to mass flight cancellations at one of the world’s busiest transportation hubs.

Hong Kong police have fought back, often violently. On June 12, police fired tear gas, rubber bullets, and beanbags at crowds of demonstrators. A woman believed to be a volunteer medic was hit in the eye with a beanbag round fired by police on August 11. On August 25, police deployed water cannons for the first time, and one officer fired a warning shot.

As neither side shows signs of backing down, here’s where you can find updates on the Hong Kong protests:

The emerging plan to save the American labor movement
The ferocious, chilling Parasite is an essential thrill ride about social inequality
Theresa May is on a doomed mission to renegotiate Brexit
How beaches and pools became a battleground for US civil rights
No, Trump hasn’t been the best president for Black America since Lincoln
Controversy over Rep. Ilhan Omar’s PTSD comments reveals how the disorder is misunderstood