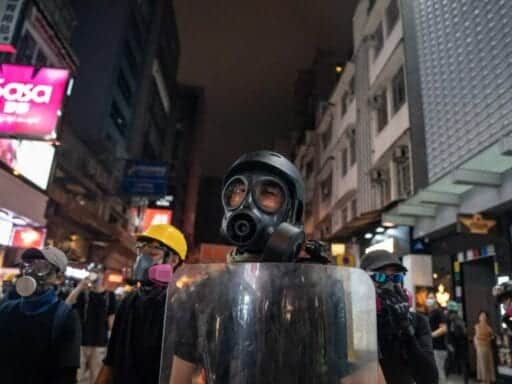 In a largely peaceful protest, Hongkongers continued to voice concern over Beijing’s role in the city’s politics.

Massive antigovernment protests were staged across Hong Kong for the tenth straight week Sunday, as citizens demanded their leaders listen to their concerns about mainland China’s influence in Hong Kong politics.

For weeks, tens of thousands — and once, nearly 2 million — Hongkongers have taken to the streets, first to force their government to end discussion of a controversial extradition bill, and later, once city leaders shelved that bill, to demand the city’s chief executive resign and apologize for what protesters say has been an overly violent police response to mostly peaceful demonstrations.

Increasingly, protesters also want their local government to address Beijing’s growing influence in Hong Kong politics, arguing that the city was guaranteed a level of independence during its handover to China from Britain, and that that guarantee is not being respected.

The tenth weekend of protests began on Saturday when groups of protesters made their way through the city; another group continued a sit in at Hong Kong’s airport. Saturday night, the demonstrations intensified as protesters set fires outside a police station; a night of clashes with police followed.

Sunday’s protest began peacefully in a park; protesters refused to follow a police-sanctioned route, although they mostly steered clear of a traditionally pro-Communist neighborhood home to immigrants from Fujian, a Chinese province, where white-clad attackers beset protesters during a strike Monday. Scuffles did break out there Sunday after as journalists were attacked by unknown men; police reportedly apprehended some of the attackers.

When the main protest ended, demonstrators began taking unauthorized paths through the city Sunday evening, in part in order to evade arrest.

“We no longer demonstrate based on a schedule, which I think works well,” one protester, Dominic Chan, told the New York Times. “We spread to different places, because every arrest means one less protester in the field.”

Police attempted to control the crowd using tear gas, rubber bullets, and arrests; protesters responded by throwing tear gas canisters back at police, and two gasoline bombs were also reportedly thrown at officers. Police claimed demonstrators were using laser pointers offensively against them, and in one neighborhood, officers tackled a protester to the ground, saying they had been throwing bricks at them.

Tensions between police and protesters escalated as the night went on; Lawmaker Ted Hui told the Hong Kong Free Press citizens not involved in the protests were also upset with officers, accusing them of arresting innocent bystanders. Bystanders were also affected at train stations — officers clashed with protesters late Saturday night at one station in an altercation that reportedly saw a demonstrator beaten by police as he fell down an escalator; rubber bullets were reportedly used inside a second station; and in an earlier incident, officers used tear gas inside a station, incapacitating protester and bystander alike.

At least one tear gas canister was fired inside the Kwai Fong MTR station to disperse protesters. pic.twitter.com/JydPYKQi1r

Adding to the confusion late in the day were arrests of protesters by men dressed in the black t-shirts and masks favored by the demonstrators. They were assisted by uniformed officers who chased off journalists seeking details.

A group of plainclothes officers, disguised as protesters, launched a surprise operation to arrest protesters outside SOGO department store in Causeway Bay. At least a dozen were arrested. The officers refused to answer reporters’ questions on their identity.#HongKong #antiELAB pic.twitter.com/P3WzYCJdu7

Largely avoided, however, were further clashes with the white-clad masked men who attacked strikers last Monday and who beat protesters in late July. Many suspect the men in white are connected with Hong Kong’s triads, also known as “the Chinese mafia.”

The police force’s restrained response fueled suspicions that the attacks were sanctioned by pro-Chinese forces in the Hong Kong government to send a message to demonstrators. And it has only further angered protesters who believe police have used disproportionate force in responding to demonstrations.

What the Hong Kong demonstrations are about

Debate on the bill was postponed indefinitely due to the protests, but the demonstrations have continued as a platform for citizens to push back against what they call “police brutality” at the protests; Hong Kong Chief Executive Carrie Lam’s dismissal of protesters as rioters and “stubborn children;” and Beijing’s growing influence in the city’s politics.

That influence is central to understanding the fury protesters have over the legislation.

Hong Kong has operated as a “special administrative region” of China since 1997, when it was transferred to the country after more than 150 years as a British colony.

It uses a model known as “one country, two systems,” in which Hong Kong — which has long had a significant pro-democracy faction — retains its own political and legal systems but is under Chinese sovereignty. This arrangement was meant to last until 2047.

But that independence is under threat in the eyes of many Hongkongers.

Protesters want this type of behavior to stop. As protester Sam told Reuters, “Independence for Hong Kong is not viable in the near term. But we have to fight for our freedoms and democracy.”

Protests continue despite threats from the mainland

Beijing views the protests as threats to its power, and has begun to set the stage to invade Hong Kong by blaming the protests on hostile “foreign forces.” In late July, Chinese Foreign Ministry spokesperson Hua Chunying told reporters the protests in Hong Kong are “somehow the work of the US.”

China would “never allow any foreign forces” to interfere in the city, she said, adding that “those who play [with] fire will only get themselves burned.”

There’s no evidence for her claim. But saying that a foreign nation instigated Hong Kong’s protests makes the case for military intervention much easier. No longer are the demonstrations an internal issue — they’re now a global conspiracy that must be shut down.

The next day, the commander of China’s military post in Hong Kong said his forces were “determined to protect national sovereignty, security, stability and the prosperity of Hong Kong,” Ward reported. Around the same time, China released a video showing officers practicing shooting at protesters.

Bonnie Glaser, an expert on Chinese politics at the Center for Strategic and International Studies, told Ward that while an invasion could end the protests, it would also hurt China’s international reputation and its economic interests.

“If the Chinese Communist Party deems that its immediate national interests require intervening to snuff out opposition that they view as threatening stability on the Chinese mainland, it can’t be ruled out,” she said.

It’s not certain that Beijing plans to invade the city, but it’s clearly possible. In the meantime, protesters seem unlikely to heed Beijing’s demands that they stop demonstrating, and are likely to continue to flood the streets in defiance.