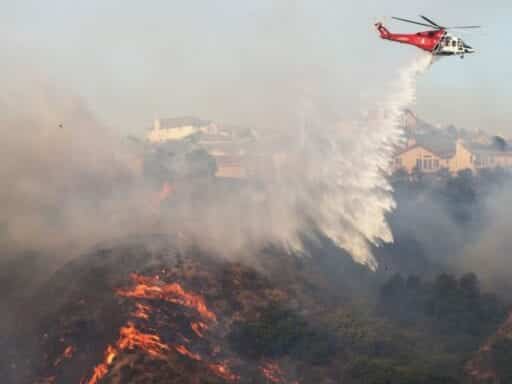 Seasonal winds and ample fuel have created a “recipe for explosive fire growth” in California.

Wildfires are burning across California this week as risks for more blazes remain high throughout the state. Dry, warm weather and strong seasonal winds this week have created a “recipe for explosive fire growth,” according to the National Weather Service.

The largest fire currently is the Briceburg Fire, spanning more than 4,900 acres near Yosemite National Park. The California Department of Forestry and Fire Protection, or Cal Fire, reported that the blaze was 30 percent contained as of Friday morning.

Look this afternoon at the Briceburg fire near Yosemite National Park. Over 1300 firefighters continue to extinguish the close to 5000 acres of flames. Right now it is 25% contained pic.twitter.com/zvI2CgUZpW

In Riverside County, a fire on Thursday destroyed 74 buildings and damaged 16 more. As of Friday morning, the Saddleridge Brush Fire in the San Fernando Valley had spread over 4,700 acres, shutting down highways and schools in the area and killing at least one person. About 100,000 people in Southern California are under mandatory evacuation orders.

Pacific Gas & Electric, California’s largest utility, took the drastic step this week of shutting down power to hundreds of thousands of its own customers in northern California, a move that left millions in the dark. The fear was that high winds would bring dry wood or brush into contact with power infrastructure and spark fires. And after being found liable for billions of dollars in damages for igniting past wildfires, including the Camp Fire in 2018, the utility is being especially cautious.

However, the public safety power shutoff was criticized by public officials ranging from California’s governor to presidential candidates, who argued that the blackouts stem from PG&E’s poor planning and management.

Southern California Edison, a utility serving the southern part of the state, also shut off power to thousands of customers on Friday and may cut off electricity to more as “red flag” warnings of fire risk remain in effect.

While the immediate conditions this week have made the California ripe for ignition, the factors behind the growing destruction of blazes in the state have been building for years. California’s fire season now stretches throughout the year, and the risk of more blazes will remain high in the coming weeks.

The wildfires in California this year so far have been relatively mild, but recent devastating fires are fresh in the minds of many. In 2017 and 2018, the state experienced some of its worst fires on record including the Camp Fire, the state’s deadliest and most destructive fire that essentially destroyed the town of Paradise.

Several factors are at play in the fires this week. Warm, dry weather met rising seasonal winds. In northern California, these are known as Diablo winds. In the south, they’re known as the Santa Ana winds. They often pick up strength in the fall.

These dry seasonal winds can gust at 70 mph, so when they meet burning grass, shrubs, or trees, they can spread flames rapidly over a huge area.

The Santa Ana winds are still hanging tough! Here is a summary of the peak winds for the last 12 hours. Gusts overnight reached up to 60mph at higher elevations! https://t.co/lYdy9SVRCT #SoCal #CAwx #LAwind

This year, a wet winter and spring also led to a bumper crop of vegetation throughout the state. This was followed by an exceptionally hot summer. The extreme heat caused the vegetation to dry out and become kindling for blazes.

Long-term trends like climate change are also increasing the size of — and potential for destruction from — wildfires. Rising average temperatures has led to forests in the western United States drying out and becoming more flammable. Researchers report that this warming has been a significant contributor to increasing wildfire risk in California.

California has also suffered years of drought. This has left trees vulnerable to pests like bark beetles. There are now more than 149 million dead trees throughout the state. While dead trees don’t necessarily lead to increased fire risk, they pose a hazard to wildland firefighters.

Land management practices like suppressing naturally occurring fires have also allowed fuel to build in wilderness areas. More construction and development in areas close to areas prone to burn has raised the likelihood of sparking a fire and increased the destruction from the blazes that result.

These factors have built up for decades, and it will take a long time to drive down risks. In the meantime, California will have to contend with the potential for devastating wildfires and drastic responses like blackouts. And the current blazes may continue to spread further.

The case for Senate Democrats to boycott Amy Coney Barrett’s confirmation hearing, briefly explained
Senate Republicans see the national emergency vote as a one-time break with Trump
Why algorithms can be racist and sexist
Cartier lost a trademark battle over the word “love”
3 ways to make the Iowa caucuses less influential
Photos: kids in 123 countries went on strike to protect the climate