Hotels are banning tiny plastic toiletries. Environmental experts think they can do more. 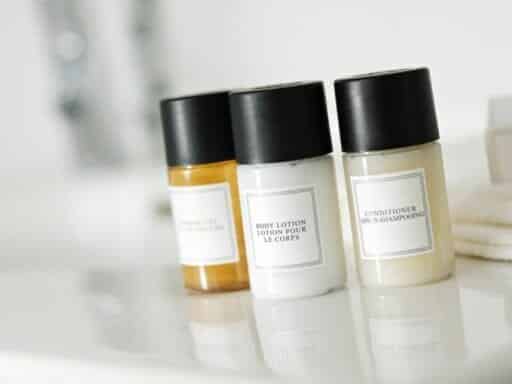 Experts want hotels to factor in the entire supply chain when considering the environmental impact of a change.

The hotel bathroom is a cave of wonders for kleptomaniacs.

The jackpot, as eager hoarders know, is the assemblage of tiny toiletries — delicately placed atop the granite sink to be used once, then thoughtlessly shoved into vanity bags for the rest of eternity. But for these teensy plastic bottles (smaller than the TSA-mandated 3.4 ounces for carry-on liquids), the end times are devastatingly near: Marriott, the world’s largest hotel chain, and Intercontinental Hotel Group, which owns a dozen hospitality brands including Holiday Inn and Hotel Indigo, are the latest to replace their tiny toiletries with dispensers or larger bottles.

Me, any other time: stealing is wrong

Me, in a hotel: GRAB THE SHOWER CURTAIN! I GOT THE TOWELS AND TINY SHAMPOOS

And while some travelers might mourn the death of these collectibles, state legislation and consumer concern about plastic waste are driving hotels to make changes sooner rather than later. The end of tiny toiletries has renewed focus on sustainability efforts at hotels, especially major chains, which publicly outline green initiatives and goals they hope to reach in five to 10 years’ time.

But how environmentally impactful are these gradual changes, and could hotels — which service millions of people a day in the US — do more given the climate crisis the world is facing?

Why hotels are getting rid of tiny bottles of shampoo

The simple reason hotels are cutting highly swipeable amenities is that they’re attempting to minimize waste. And the pressure to do so is coming from customers and state lawmakers alike.

The California legislature has passed a bill that would ban single-use plastic bottles at hospitality establishments by 2023. While it faced criticism from the Republican minority, the California Hotel and Lodging Association supported the measure, saying that hotels like Marriott and Intercontinental have already started to phase out small toiletries.

On Wednesday, New York State Senator Todd Kaminsky introduced a similar bill, which also required hotels to comply by 2023. It would aim to reduce around 27 million plastic bottles of waste from more than 650 New York City hotels every year and was supported by the state’s hospitality and tourism association.

Single-use plastics from hotel rooms in NYC alone send over 89 tons of waste to landfills. That is why I’ve intro’d a bill to eliminate plastic comestic bottles from hotels. Dispensers work just fine Who else is ready to do more for a sustainable planet? pic.twitter.com/OSUYMsjNid

Most chain hotels, especially luxury brands, are ahead of the legislative curve, having integrated plastic-free practices into their services to appeal to guests. For decades, hotels have engaged in “amenities wars” with competitors, courting the favor of their guests in the 1980s and again in the mid-2000s, according to a Slate investigation into why toothpaste isn’t offered at American hotels. According to a 1990 Los Angeles Times article, Hyatt Hotels started offering $20 amenity packages in the 1960s; decades later, shampoos, conditioners, and bath gels are considered the bare minimum when it comes to guest expectations.

These changes reveal how hotels are very much a work in progress, adapting to fit industry and customer standards. For example, free soap — a legally-required amenity — used to be a rare commodity, and it wasn’t until the 1950s that hotel executives considered adding miniature toiletries to rooms, Slate reported.

Within the past decade, consumer demand has been for eco-friendly services, so hotels have similarly rushed to adopt better sustainability practices, like the towel reuse program and setting default cooling and heating temperatures. The way hotels see it, sustainability is a journey, says Denise Naguib, vice president of sustainability and supplier diversity at Marriott. “We don’t believe this is the end-all be-all for plastic waste, but we can’t underestimate the value of reducing 1.7 million pounds of plastic from our portfolio alone.”

The larger shampoo bottles from Marriott will still be plastic, Naguib says, but are recyclable and made from “pretty common plastic” guests personally buy for their home use.

Nixing little conditioners might not make a big environmental impact, but there’s more hotels can do

Even if most hotels worldwide theoretically replaced all their tiny toiletries by tomorrow, single-use plastics are still omnipresent on their premises — in the lobby Starbucks, room-service utensils, sealed water bottles, and disposable cups. It seems almost impossible to phase out plastic entirely — not to mention reduce waste and energy consumption — in an industry that’s predicated on delivering excess comfort, cleanliness, and convenience to millions of travelers daily.

That’s not to mention how the tourism industry is responsible for nearly 5 percent of global carbon emissions, and hotels, which are notorious for high energy and water consumption, account for 20 percent of that.

Large hotel chains are slow-moving and take time to enact change on all their properties, says Willy Legrand, a German professor of hospitality management who does research on sustainability at the International University of Applied Sciences at Bad Honnef. “At the end of the day, they’re businesses trying to run as efficiently as possible,” he says.

Right now, it’s beneficial to turn their attention to plastic with the recent bans on plastic straws and single-use utensils in restaurants, but environmental activists are highly critical of symbolic, feel-good initiatives.

In an op-ed for MarketWatch, Massachusetts Institute of Technology professor Yossi Sheffi writes that the tiny toiletry ban seems like “more of a PR exercise than a real attempt to move the needle.” The author of Balancing Green, a book on corporate sustainability, Sheffi argues that hotels must factor in the entire supply chain when considering a product’s environmental impact.

The goal should be holistic sustainability: reducing waste and energy in all areas of the hotel’s operations. For example, Marriott also focuses on landfill and food waste reduction in addition to plastic, Naguib adds. Since Marriott owns more than 7,000 properties, implementing the amenities change can take months. Any bigger, large-scale change, such as retrofitting a building to be more energy efficient, can take years and requires the approval of multiple parties, says Legrand.

At the end of the day, they’re businesses trying to run as efficiently as possible

“That company might be partnering with an owner of a hotel, and you have potentially two, three, maybe four parties involved,” he says. “For the consumers, you don’t see it when you enter a Hilton or Marriott but it might not necessarily be directly run or owned by the brand.”

The best practices Legrand has seen through his 15 years of research are at privately owned hotels, which have been pushing the boundaries of how sustainable a hotel can be. There are zero-energy and even plus-energy establishments, which focus on being carbon neutral, creating zero food waste, and curbing water use. Most are owned by private hoteliers who are passionate about sustainability, Legrand says.

Still, major chains are influential in changing industry practices, says Shengyin Xu, global sustainability manager at World Resources Institute. “Any changes they make at the top level affects thousands, if not millions, of guests, just by default,” she told me.

Xu points to Hilton, the first hotel group to join the institute’s “Cool Food Pledge,” which challenges businesses to reduce carbon emissions from the food they serve by 25 percent by 2030. “There’s a lot hotels can do to reduce food waste, like reducing buffets, making food to order, or helping kitchen staff or vendors optimize the ingredients they use,” she says.

“Any changes they make at the top level affects thousands, if not millions, of guests, just by default”

Most hospitality leaders now recognize that green practices are profitable and popular among travelers, Legrand says, adding that these motivations could be cost-driven.

Still, consumers are finicky, especially when it comes to travel arrangements. (As I mentioned earlier, people desire comfort and convenience in a hotel stay they’re exorbitantly paying for.)

According to a 2019 Harvard Business Review article, customers increasingly say they want brands to support green efforts but few actually follow through with their wallets. To mitigate that gap between their intentions and actions, the writers suggest companies make people’s eco-friendly behaviors public.

Why? Because humans are social creatures and want to be recognized for doing good. For example, hotels’ towel reuse program increased by 20 percent after guests were asked to hang a card on their room door to signal their participation.

After all, hotels could simply give consumers no choice in participating in eco-friendly practices. It would be a radical move if hotels started restricting air-conditioning use or requiring guests to reuse their towels, but swapping out miniature toiletries is a change that needs getting used to, too.

“We absolutely expect some people will be challenged by that change, but we hope that over time, people will be more comfortable with it,” Marriott’s Naguib told me.

Given the changes in hotel amenities since the Great Recession, it’s safe to say that nothing (with the exception of soap and shampoo) is a certain staple. If shower caps, mouthwash, and tiny toiletries can fall out of favor, there’s no telling what new changes are on the horizon, especially as climate change emerges as one of the most pressing issues for this generation.

A vaccine we don’t even use anymore is a reason polio keeps spreading — yes, really
Welcome to the Time Issue of The Highlight
“King-Lee Day” and other ways states bend MLK’s legacy
The fake text message about the “Stafford Act” and a national quarantine, explained
Tom Coburn, the Senate’s “Dr. No,” has died at 72
California’s ballot initiative system isn’t working. How do we fix it?