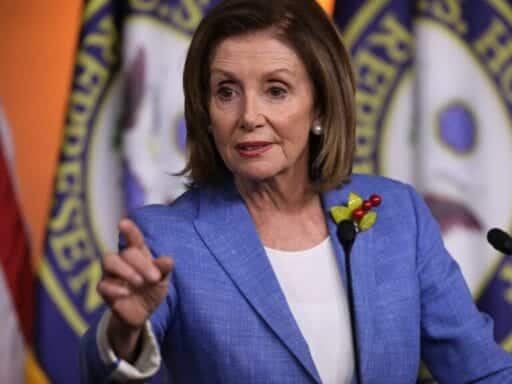 The Majority Leader might be stonewalling bills in the Senate, but Democrats aren’t letting up.

Senate Majority Leader Mitch McConnell might be determined as ever to stymie election security legislation, but House Democrats remain undeterred in their push to advance it. In fact, one of House Democrats’ top priorities after the upcoming August recess will be introducing — and likely passing — another election security bill intended to put pressure on McConnell and Senate Republicans.

“In his testimony, [former special counsel Robert Mueller] said that the Russians are attacking our elections in a sweeping and systemic fashion and now they are doing it as we sit here,” said House Speaker Nancy Pelosi in a weekly press conference on Friday. “We will continue to legislate on that score.”

Pelosi’s statement follows Mueller’s appearance in front of the House last week, and the release of a report from the Senate Intelligence Committee that found hackers targeted elections in fifty states in 2016.

House Democrats’ latest election security bill will include restrictions on foreign interference that overlap heavily with some of the measures addressed by their sweeping anti-corruption legislation, HR 1.

HR 1 was one of the earliest agenda items House Democrats passed after retaking the lower chamber during the midterms. The legislation did not, however, advance in the Senate; McConnell called the bill “a terrible proposal,” and promised “it will not get any floor time in the Senate.” Thus far, he’s kept that promise.

Later in the year, Democrats sought to reiterate their case for election security by breaking out part of HR 1 that required the use of back-up paper ballots, passing it independently as the SAFE Act. That bill is also among a growing pile-up that’s seen no action in the Senate. House Democrats’ efforts to advance another bill to address foreign interference in American elections is the latest sign of how committed they are to pushing this issue in the face of staunch opposition.

“This will be McConnell’s third opportunity to do the right thing in terms of demonstrating his patriotism,” Rep. John Sarbanes (D-MD), a cosponsor of the latest legislation, told Vox. Rep. Zoe Lofgren (D-CA), chair of the House Administration Committee, is leading the push on this legislation, as she did on the SAFE Act as well.

According to Sarbanes, the bill, which the House will consider in September, will address three key issues:

1) It aims to pinpoint and limit illicit foreign money that’s poured into US elections.

2) It requires campaigns to report offers of opposition research from foreign governments to the FBI.

McConnell has said he plans to continue blocking election security bills, in spite of repeated warnings from officials like Mueller and FBI Director Christopher Wray, partly because he’s concerned about the federal government having too much power over state elections. McConnell’s stance is also likely tied to opposition from President Donald Trump, who is known to be averse to this issue, because he sees it as too closely related to questions about the outcome of the 2016 election. Most recently, McConnell has used Democratic criticism of his stonewalling of election security legislation to fundraise.

“When it comes to these election security measures, [McConnell is] really caught in the switches,” said Sarbanes. “He knows that the president will read any measures related to interference in the 2016 election as a suggestion that the president didn’t win that election legitimately.”

While some Republicans have acknowledged the importance of strengthening election security, and cosponsored bills on the subject, none in the Senate have signaled that they’ll push back on McConnell just yet. As Democrats in the upper chamber tried to hold votes on a cluster of bills last week, they were shot down multiple times.

Without new election security laws, the various 2020 state and federal races could be just as vulnerable to possible breaches as the ones in 2016. Ahead of the next election, House Democrats are focused on amping up the pressure that McConnell feels.

Vox Sentences: #MeToo leader faces sexual assault allegations
One Good Thing: An amazing game played entirely via text message
Vox Sentences: NATOhhh no...
What 2020 Democrats will do to hold fossil fuel companies accountable for climate change
The World War II food memoir that’s getting me through life in a pandemic
The third Democratic presidential debate, explained in under 30 minutes