House Democrats are not finished with Kavanaugh 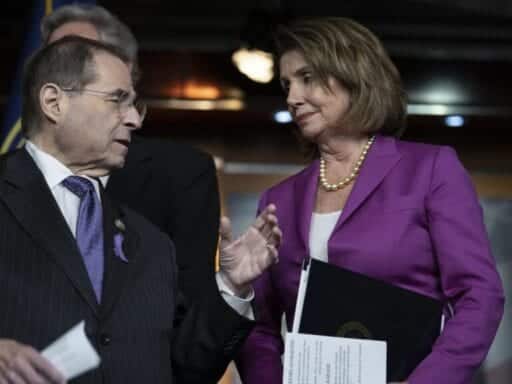 If they take back the House, Democrats want to investigate whether Kavanaugh committed perjury.

As the Senate appears poised to narrowly confirm Judge Brett Kavanaugh to the Supreme Court in a Saturday vote, congressional Democrats are vowing the fight isn’t over.

For the past week, House Democrats have been saying they’ll take over the investigation into Kavanaugh’s background if they win in the 2018 midterms. Five Democratic members of the House Judiciary Committee — including ranking member Rep. Jerry Nadler (D-NY) — have called for an investigation into the sexual assault allegations against Kavanaugh. (Kavanaugh has denied all the allegations made against him).

Nadler, who would become committee chairman if Democrats win back the House, made it clear he would like to do a thorough investigation into both the sexual assault and misconduct allegations brought by Christine Blasey Ford and other women, as well as claims that Kavanaugh perjured himself in sworn testimony in front of the Senate Judiciary Committee.

“If he is on the Supreme Court and the Senate hasn’t investigated, then the House will have to,” Nadler said Sunday on ABC News. “We would have to investigate any credible allegations certainly of perjury and other things that haven’t been properly looked at before.”

House Democrats investigating Kavanaugh would be the first step, but some Democrats, including retiring Rep. Luis Gutiérrez (D-IL) and Ted Lieu (D-CA), have already called for the House to initiate impeachment proceedings against Kavanaugh if they find he lied about sexually assaulting Ford.

But House Minority Leader Nancy Pelosi has made it clear that she does not believe the House should go so far as impeaching a sitting Supreme Court justice, a similar line she’s deployed when asked about impeaching President Donald Trump.

“Let’s take it one day at a time. We are not about impeachment,” Pelosi said at the Atlantic Festival on Tuesday.

But the message is clear: Democrats are not finished with Brett Kavanaugh.

What House Democrats could investigate

There has already been a limited FBI investigation into the allegations against Kavanaugh — which Republicans senators have said they are satisfied with the results of, and Democrats have questioned.

But Nadler and other House Democrats have made it clear they are also interested in investigating something else entirely: the question of whether Kavanaugh lied under oath to the Senate and committed perjury.

“This is a disgrace what’s happened in [the] United States Senate,” Rep. Hakeem Jeffries (D-NY), a member of the House Judiciary Committee, told the Washington Examiner’s Laura Barrón-López. “And obviously we have to find ways to make sure the truth is eventually brought to light, whether Kavanaugh is confirmed or not.”

It’s not just House Democrats who have openly questioned whether Kavanaugh lied under oath. Multiple Democratic senators have suggested the judge was not truthful when he answered questions about underage and excessive drinking during his high school years,

“We’ve seen a pattern with Judge Kavanaugh from his testimony … when he’s asked about controversial issues that he’s been involved in in the past, he tries to deny or downplay them,” Sen. Dick Durbin (D-IL) said in a speech on the Senate floor on Friday. “On issue after issue, Judge Kavanaugh’s sworn testimony was either misleading or false. When it comes to his own words, he’s happy to take liberties and refuse responsibility.”

Rep. Jamie Raskin (D-MD) has suggested Kavanaugh should submit to a polygraph test, and House Oversight Committee ranking member Rep. Elijah Cummings told the Washington Post’s Mike DeBonis he would “love” to be able to compel Kavanaugh’s high school friend Mark Judge to testify in front of his committee if he becomes chairman.

NEW from @RepCummings, who could soon have subpoena power if Dems win House: “I would *love* to have (Mark) Judge testify before my committee. I would love to. Bring him out from Bethany Beach or wherever he is. And he can sit there and tell us, sworn, what’s going on.”

Even if Democrats regain control of the House and are able to investigate Kavanaugh, it’s doubtful they’d have the will or ability to actually impeach him. Current Democratic House leadership has all but dismissed the idea, and the likelihood of the Senate flipping Democrat and agreeing to impeachment proceedings is also slim.

Democrats still have a lot of unanswered questions about Kavanaugh

From the beginning of Kavanaugh’s nomination, Senate Democrats have been calling for a slower confirmation process and for Republicans to provide more information about the judge.

Republicans have been eager to get Kavanaugh confirmed to the Supreme Court before the 2018 midterm elections, in case they lose the Senate (an unlikely possibility). As they’ve rushed to do so, Democrats say the procedure of advice and consent, in which the Senate first reviews a nominee’s entire public record and then has the opportunity to question it, has been completely disregarded.

As Vox explained, while the pace of Kavanaugh’s confirmation isn’t necessarily unprecedented, the timeline is. The Bush White House Library released 42,000 pages of documents from Kavanaugh’s time in the White House, just hours before the start of Kavanaugh’s September confirmation hearings. Democrats on the Senate Judiciary Committee blasted Republicans for giving them essentially no time to thoroughly examine the documents.

The missing documents are still a sore point for Democrats, who have filed a Freedom of Information Act request to obtain them.

“They’re public documents, they will be [released] someday,” Sen. Chris Coons (D-DE) told reporters on Friday. “We’ve got folks that are betting there is nothing in there that is relevant or decisive or outcome-determinant.”

But when the FBI’s investigation was done, Democrats still had questions. The FBI reached out to 10 people in the supplemental background check and interviewed nine. Those nine people did not include Kavanaugh himself, who denies the allegations, or Christine Blasey Ford, the Palo Alto University professor who claims Kavanaugh sexually assaulted her in high school.

“We had many fears that this was a very limited process that would constrain the FBI from getting all of the facts,” Minority Leader Chuck Schumer said at a press conference Thursday. “Those fears have been realized.”

In the Senate on Friday, some Democratic senators seemed resigned to the idea that if Kavanaugh is confirmed to the Supreme Court, there’s not much they would be able to do about it.

“The reality is, if he is confirmed by the United States Senate, he will be a Supreme Court justice,” Sen. Cory Booker (D-NJ) told reporters, adding that he hadn’t thought about what Democrats could do afterward. “I don’t want to look beyond the final vote.”

Most US clinical skin care is designed for white women. This CEO is making products for everyone.
Russian police crack down on protesters during the largest demonstrations in a decade
Who is winning the Super Tuesday delegate count so far
The Trump Organization executive who knows all about the business has been subpoenaed
The Trump administration just imposed another roadblock on low-income immigrants
The battle over a Texas order limiting ballot drop-off locations, explained