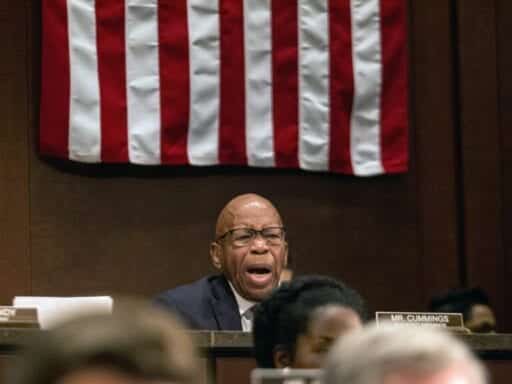 House Republicans have been reluctant to investigate Trump. Democrats have no such qualms.

After former Trump attorney Michael Cohen’s bombshell confession under oath that the president of the United States was a co-conspirator on campaign finance violations of arranging payments to women Trump had affairs with, House Democrats want to know more.

Even with the House of Representatives still on August recess, ranking member of the House Oversight and Government Reform Committee Rep. Elijah Cummings (D-MD) sent a letter to the Republican committee chair, Trey Gowdy, on Tuesday, urging him to bring Cohen up to testify.

“Given the gravity of these revelations, I request that you schedule a hearing as soon as possible before the committee … to obtain sworn testimony directly from Mr. Cohen,” Cummings wrote. “I have no doubt that you would convene immediate hearings on these matters if the occupant of the White House were a Democrat. I ask you to apply the same standard here.”

.@RepCummings, top Dem on House Oversight, wants Michael Cohen to testify in front of the committee on his plea/implicating POTUS: pic.twitter.com/yhf8vNyMtM

Of course, writing letters is as much as Cummings can do at this point; Republicans control both the House and Senate, and thus, the power to schedule congressional hearings. At this point, they aren’t showing much appetite for asking Cohen or other Trump associates to testify.

But with November midterms elections looming and things looking good for House Democrats, there’s a very real chance that Cummings and his Democratic colleagues could soon have the authority to hold all the hearings they want.

Over in the House Judiciary Committee, ranking member Rep. Jerry Nadler issued a similarly biting statement on Tuesday, calling on Judiciary Chair Rep. Bob Goodlatte (R-VA) to pass a bill to protect special counsel Robert Mueller’s Russia investigation and suspend the House GOP’s investigation into whether the FBI and Justice Department had political bias during the 2016 election.

Cummings and Nadler issue a lot of statements calling on Republicans to do something when Trump news breaks. But the two Democrats are also giving a preview of what they’ll likely do on their own if they return to power in November.

What Democrats could do to make Trump’s life difficult

There’s a lot of speculation about whether Democrats will win back the House — and by how much. Right now, some election analysts are predicting that if they win, it could be by a slim margin that wouldn’t give Democrats a lot of room to pass policy without significant input from Republicans.

But a hypothetically slim margin of power would still have a lot of power to control congressional hearings. Democrats would have the purview to make the Trump administration’s life a living hell by bombarding them with subpoena after subpoena, and call up administration officials and Trump associates to testify, keeping the president’s scandals endlessly in the news.

In other words, there would likely be a lot more hearings with former Trump officials like the one Cummings proposed in his letter.

“Everything gets investigated,” Thomas M. Davis III, the Republican former chair of the House Oversight and Government Reform Committee during the George W. Bush administration, told the Washington Post’s Mike DeBonis. “You spend half your time answering subpoenas, digging up documents and having your people appear before these committees. … Frankly, your legacy is ruined at that point.”

Davis used his power in 2006 to investigate the George W. Bush administration from top to bottom, on the Iraq War as well as Bush White House staffers’ use of private email servers and deletion of thousands of emails.

As Davis pointed out to the Post, Democrats’ requests in a hypothetical majority could also become a huge hindrance and time suck for the Trump administration. It’s tough to charge ahead with policy when you’re bogged down with request after request.

Like their colleagues in the House, Senate Republicans are showing little appetite for opening up any new investigation into whether Trump was a co-conspirator with Cohen to violate campaign finance laws.

“That’s going to have to be judged through the court system, and I think that’s where it should be judged,” Senate Majority Whip John Cornyn (R-TX) told reporters on Tuesday. In addition to being the No. 2 Senate Republican, Cornyn also serves on the US Senate Select Committee on Intelligence, one of the key Senate committees with the power to subpoena and call people to testify.

With the 2018 electoral map looking much more favorable for Democrats in the House than in the Senate, Cummings and Nadler have a far better chance of being the ones asking the tough questions of the Trump administration come January 2019.

Vox Sentences: 17 fires this time
Money Talks: The college friends launching a company in a pandemic
What the new stimulus money means for small business loan programs
Why Georgia has runoff elections
Netflix’s Unsolved Mysteries is different than the original. But one episode restores its pulpy aest...
Vox Sentences: Your Vox guide to the first debate