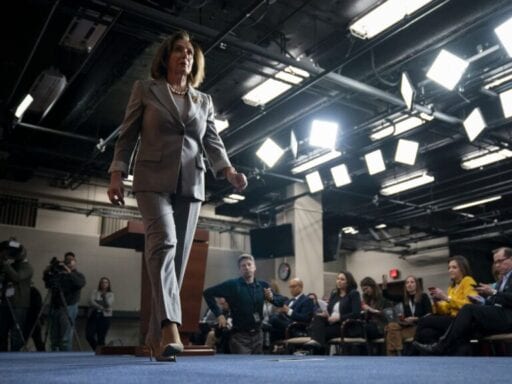 Share
Loading...
Speaker of the House Nancy Pelosi exits after her weekly news conference on Capitol Hill December 12, 2019 in Washington, DC, where she fielded multiple questions about the impeachment inquiry. | Drew Angerer/Getty Images

With few defections expected, Democrats could pass articles of impeachment next week.

House Democrats will vote on two articles of impeachment next week — and while some moderates are still mulling over their final decision, the caucus is looking relatively united.

The House vote, which one lawmaker told Vox could take place Tuesday or Wednesday, will center on two articles the House Judiciary Committee is expected to pass. Both are effectively “charges” that are being levied against President Donald Trump, and they focus on abuse of power and obstruction of Congress. With the impending vote, Democrats are poised to meet the Christmas timeline that has been floated for months.

This timing takes several upcoming dates into consideration: If they vote on impeachment and finalize an appropriations deal by next week, members can go home for the scheduled holiday recess. Additionally, the timing of the vote means the Senate can likely wrap up an impeachment trial before the 2020 election cycle gets underway in February.

At this point, several Democrats note that there’s strong backing for both articles — though they expect a handful of lawmakers to defect, much like Reps. Jeff Van Drew (NJ) and Collin Peterson (MN) did when they bucked the party on an impeachment resolution earlier this year.

As the rules go, Democrats will need a simple majority in order to pass both articles of impeachment. Since the House currently has 431 members, the party will have to secure 216 votes. If the 233 Democrats in the House mostly vote in favor, they’ll have the numbers required to impeach the president.

Van Drew, a New Jersey moderate who plans to vote against the articles of impeachment, has hypothesized that he and Peterson could be among a small group of no more than five Democrats who’ll go against the party. As a Politico report detailed this week, there was a contingent of roughly 10 moderates who’d floated the idea of censuring Trump instead of impeaching him — but that effort has since fizzled.

A few moderate members that Vox spoke with said they would need more time to process the articles of impeachment. Others including Reps. Conor Lamb (D-PA), Lucy McBath (D-GA) and Sharice Davids (D-KS) have signaled more recently that they’re already on board.

“I am supportive of the two articles of impeachment, and I’m also pleased it was kept narrow,” Rep. Elaine Luria (D-VA) told reporters outside the House floor on Thursday.

So far, Democratic leadership isn’t actively discouraging wary moderates from voting their conscience, even if that means voting against articles of impeachment.

“I have no message to them, we are not whipping this legislation,” Pelosi told reporters at her Thursday morning press conference. “Nor do we ever whip something like this. People have to come to their own conclusions. … I don’t say anything to them.”

By and large, of the 10 Democrats Vox spoke with, the majority didn’t expect to see significant fracturing within the caucus when the vote takes place next week. While Democrats were once heavily divided on this subject, the narrow inquiry into President Trump’s conduct with Ukraine — and the evidence it has unearthed — appear to have brought many of them together.

If there’s anyone who’s still sussing out their position on the articles of impeachment, it’s the same set of lawmakers that had balked at the start of the inquiry. While some moderates have said they want to carefully consider all of the facts before voting, there’s no sudden groundswell of defections looming — yet.

Thus far, only Van Drew has explicitly said he plans to vote against the articles of impeachment, but Peterson has indicated that he’s likely to do so.

Rep. Anthony Brindisi (D-NY), a moderate New York Democrat who represents a district that went for Trump in 2016, said he’s still reviewing the articles that have been raised against Trump before he makes a final decision on how he’ll vote. “I’m undecided at this point,” he said. “This weekend, I’ll look at the articles and look at the evidence again.” Moderate Rep. Dan Lipinski (D-IL) also said he had yet to make a decision.

Luria, a Navy veteran who defeated an incumbent Republican in her Virginia Beach district in 2018, told Vox she felt confident in her vote after viewing weeks of House Intelligence and Judiciary Committee hearings.

“That reconfirmed what I had thought about what was being investigated. We had numerous public servants … who spoke in a nonpartisan way and were truly there to represent our country overseas but felt that this aid was being leveraged, this situation was not right, that the president was unduly using the influence of his office to get an outcome that he wanted,” Luria told Vox.

Rep. Ann Kirkpatrick (D-AZ) added that she had decided to impeach Trump after reading special counsel Robert Mueller’s report, well before the Ukraine scandal had happened.

“I’m a former prosecutor and I just reached the point where I said, as a prosecutor if I had gotten a report like this, I probably would have issued 15 different charges,” Kirkpatrick said. “That’s when I called for impeachment.”

And Rep. Harley Rouda (D-CA), another first-term Democrat who beat longtime California Republican lawmaker Dana Rohrabacher in 2018, said that Trump’s persistent stonewalling of congressional subpoenas was the first thing that made him lean toward the impeachment inquiry. Ukraine confirmed that inclination, Rouda added.

“The Ukrainian situation is something that’s even more serious in nature by this president and the administration and what we have seen transpire prior thereto,” he told Vox. “While many of those other things were certainly impeachable conduct, this is way beyond the norm.”

Democratic unity on the impeachment vote is incredibly important for the party to send a decisive message about removing the president from office. The shift the caucus has made in the past year — from a fraction of Democrats backing an impeachment inquiry to almost all of them — has been significant, and the numbers the party sees at next week’s votes will underscore the strength of their case.

Moderate Democrats have long been the contingent of the party that’s been more reserved about the impeachment inquiry, and the prospect of removing the president from office.

For many who won in Trump districts in 2018, part of this reluctance is likely tied to constituent sentiment: According to an October memo from the Democratic Congressional Campaign Committee, the margins of support for the impeachment inquiry were much closer in battleground areas. Polling, of course, may have shifted since then — though these districts continue to trend closer to the center than others that are firmly Democratic. As Vox’s Aaron Rupar has written, however, the tightness of these polls also speaks to how much Democrats have gained in certain districts that favored Trump across the country.

To help take the heat off some moderates, Pelosi has been putting a lot of focus on the legislative work the caucus has done, in addition to impeachment. It’s a strategy that’s drawn criticism because it means that the president is also walking away with legislative victories he’ll be able to tout in 2020.

But with a few other big bills to lower the prescription drugs, and agreements being reached on the National Defense Authorization Act and 12 appropriations bills to fund the government, moderates like Luria are going to be able to go back home and talk about both the rider bills and the money they’ve secured for their districts.

Some Democrats also said there’s room to disagree on impeachment in the caucus and the party, but that doesn’t mean the majority of House Democrats aren’t ready to move forward.

“I think we’re a big tent caucus, that’s what I like about our caucus,” Kirkpatrick told Vox. “There’s room to have whatever point of view you think you believe in and be yourself, be honest and represent your constituents.”

Still, there’s only so much room in the tent. It’s imperative for Democrats to make sure this vote goes well, since it will be the last time the entire caucus has an opportunity to vocalize their stance on the impeachment inquiry. A few defections won’t look too bad, but a substantially fragmented caucus would suggest that Democrats don’t even have the support within their own ranks for this effort even as they criticize Republicans for opposing it.

When the articles hit the floor next week, expect more debates and amendments before it goes to final passage. Rouda told Vox the vote could happen on Tuesday or Wednesday, but leadership has not yet set an exact date, meaning things could be subject to change.

The impeachment vote is the final move that Democrats make before handing things over to the Senate. Once the president has been impeached by the House, as is the expectation, the Senate will take over for the trial. Some House members will still be involved in making the case for the articles of impeachment as part of the trial, but the lower chamber won’t be the focal point of the action anymore.

Before they pass the reins, House Democrats are looking to capitalize on this chance to leave their mark.

Big oil and Bush-era lobbyists are teaming up to support a carbon tax
I’m an international student 7,000 miles away from family. Loneliness is my new reality.
Trump made fun of Rep. Mark Sanford again. The House Freedom Caucus has had enough.
Trump cites fake polls to make the case that support for impeachment is falling
Federal appeals court rejects a Trump election lawsuit: “Calling an election unfair does not make it...
Senate Democrats want to subpoena four witnesses in the impeachment trial