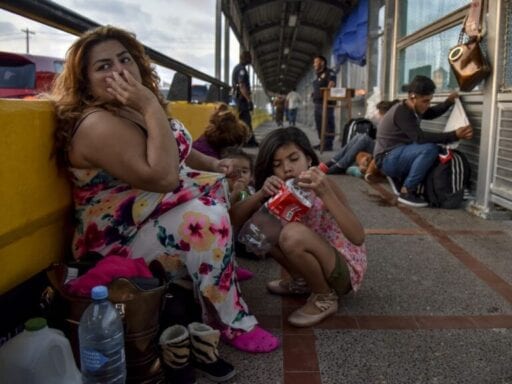 Share
Loading...
Rosa Gomez, from Honduras, and her family camp for hours on the Mexican side of the Gateway International Bridge, just across the line that separates Brownsville, Texas, from Mexico on Saturday, June 23, 2018, in Matamoros. | Jahi Chikwendiu/Washington Post/Getty Images

House Democrats are calling for investigations into two temporary immigration courts that opened along the southern border last month where migrants who have been waiting in Mexico are fighting to obtain asylum in the US, according to a letter sent Thursday.

The courts — located in tent complexes near US Customs and Border Protection ports in Laredo and Brownsville, Texas — were built to hear cases from migrants who have been sent back to Mexico under President Donald Trump’s “Remain in Mexico” policy, officially known as the Migrant Protection Protocols.

Unveiled in January, the policy has affected over 50,000 migrants found to have credible asylum claims, including those who present themselves at ports of entry on the southern border and those who are apprehended while trying to cross the border without authorization.

The tent courts, which opened in early September with no advance notice to the public, have the capacity to hold as many as 420 hearings per day in Laredo and 720 in Brownsville conducted exclusively by video. Immigrants and their attorneys video conference with judges and DHS attorneys appearing virtually, streamed from brick-and-mortar immigration courts hundreds of miles away.

Democratic leaders, led by Congressional Hispanic Caucus chair Joaquin Castro, raised concerns Thursday that the tent facilities have led to violations of migrants’ due process rights by restricting their access to attorneys and relying on teleconferencing. They also expressed alarm that asylum seekers processed in the facilities are being returned to Mexico even though they are in danger there and that the public has largely been barred from entering the tent facilities, shrouding their operations in secrecy.

“Given the lack of access to counsel and the limitations of , we are concerned these tent courts do not provide full and fair consideration of their asylum claims, as required by law,” the lawmakers wrote, urging the Department of Homeland Security and Department of Justice’s inspectors general to investigate. “The opening and operations of these secretive tent courts are extremely problematic.”

Few have been allowed to enter the courts

Acting Department of Homeland Security Secretary Kevin McAleenan had assured that members of the public and the press would be permitted to access to the facilities so long as they do not “disrupt proceedings or individuals’ privacy.”

In practice, however, that’s not how they have operated, and as House Democrats pointed out Thursday, preventing the public from viewing immigration court proceedings violates federal regulations.

“We are concerned that the administration has intentionally built these tent court at Customs and Border Protection ports of entry to justify limited public access to these facilities, and that this lack of transparency may allow DHS to hid abuse and due process violations that may occur in the tents,” their letter said.

Laura Lynch and Leidy Perez-Davis, attorneys with the American Immigration Lawyers Association who visited the port courts shortly after they opened in September, said they and other lawyers from the National Immigrant Justice Center, Amnesty International, and the Women’s Refugee Commission were barred from observing proceedings in the courts absent a document showing that they were representing one of the migrants on site.

The few attorneys that had such agreements were allowed to enter the facility a little more than an hour before their clients’ hearings to help them prepare — insufficient time given that, for many, it is their first opportunity to meet in person, Perez-Davis said.

In the first few days that the courts were open, the only people allowed in the hearing rooms were immigrants and their attorneys — but critically, not their translators, Lynch said. There were few attorneys representing asylum seekers in proceedings at the port courts, and even fewer spoke fluent Spanish and could have conversations with their clients.

Officials have since allowed translators into the hearing rooms, Lynch said, but neither DHS nor the DOJ have issued any formal clarification of their policy.

Attorneys are also not allowed to attend “non-refoulement interviews” at the tent facilities, in which an asylum officer determines, usually over the phone, whether a migrant should be sent back to Mexico or qualifies for an exemption allowing them to go to a detention facility in the US.

Limiting access to the port courts also inhibits legal aid groups’ ability to conduct presentations for migrants informing them of their rights in immigration proceedings, as they typically do in immigration courts.

Perez-Davis said that she observed one hearing from San Antonio — where some of the remote immigration judges handling cases in the ports courts are based — in which a young migrant woman was confused about what “asylum” means. That kind of knowledge would have previously been provided in presentations by legal aid groups.

The use of video conferencing in immigration court proceedings has long been a subject of controversy. In theory, teleconferencing would seem to make proceedings more efficient and increase access to justice, allowing attorneys and judges to partake even though they may be hundreds of miles away.

But in practice, advocates argue that teleconferencing has inhibited full and fair proceedings, with some even filing a lawsuit in New York federal court in January claiming that it violates immigrants’ constitutional rights.

Immigrants who appear in court via teleconference are more likely to be unrepresented and be deported, a 2015 Northwestern Law Review study found. Reports by the Government Accountability Office and the Executive Office of Immigration Review have also raised concerns about how technical difficulties, remote translation services, and the inability to read nonverbal communication over teleconference may adversely affect outcomes for immigrants.

Yet despite such research, the immigration courts have increasingly used video as a stand-in for in-person interaction.

In the port courts in Laredo and Brownsville, video substitutes for that kind of interaction entirely — but it has not been without hiccups so far.

Lynch, Perez-Davis, and Yael Schacher, a senior US advocate at Refugees International, said they all observed connectivity issues. For migrants who must recount some of the most traumatic experiences of their lives to support their asylum claims, video conferencing makes their task harder, Perez-Davis said.

“I have been asking myself what happens if you’re in the middle of the worst story you’ve ever had to tell, and the video cuts out?” she said.

These courts are sending immigrants back to danger in Mexico

Migrants are required to travel in the dark and show up for processing before their hearings at the port courts early as 4:30 in the morning.

That puts them at increased risk, with recent reports of violence and kidnappings in Nuevo Laredo, which is directly across the border from Laredo, and Matamoros, which is adjacent to Brownsville. The State Department has consequently issued a level four “Do Not Travel” warning in both Nuevo Laredo and Matamoros.

Lynch and Perez-Davis said that attorneys are also increasingly afraid of crossing the border into Mexico in light of those safety concerns. Where they used to cross over the border to deliver presentations informing migrants of their rights and the US legal process in Mexican shelters, that is no longer happening to the same degree.

“It has chilled any sort of ability to provide legal representation,” Perez-Davis said.

DHS purports to exempt “vulnerable populations” from the Remain in Mexico policy and allow them to remain in the US, but in practice, few migrants have been able to obtain such exemptions in non-refoulement interviews.

The advocacy group Human Rights First issued a report earlier this month documenting dozens of cases in which inherently vulnerable immigrants — including those with serious health issues and pregnant women — and immigrants who were already victims of kidnapping, rape and assault in Mexico were sent back under MPP after their interviews.

With attorneys barred from advocating for migrants in these interviews, migrants will likely continue to be sent back to Mexico even if they should qualify for an exemption under DHS’s own guidelines.

“These interviews are a basic human rights protection to ensure that no one is returned to a country where they would face inhumane treatment, persecution or other harm,” Democrats wrote Thursday. “We are concerned that DHS is returning asylum seekers to harm in Mexico.”

WikiLeaks says it published ICE employees' LinkedIn profiles
Trump’s climate change reading material is beyond parody
Joe Biden’s health care plan, explained in 800 words
I met Robert Mugabe in the late 1970s. What he told me still haunts me.
The Kamala Harris identity debate shows how America still struggles to talk about multiracial people
Little Mix is the best girl group in the world. And it’s time America gave them a listen.