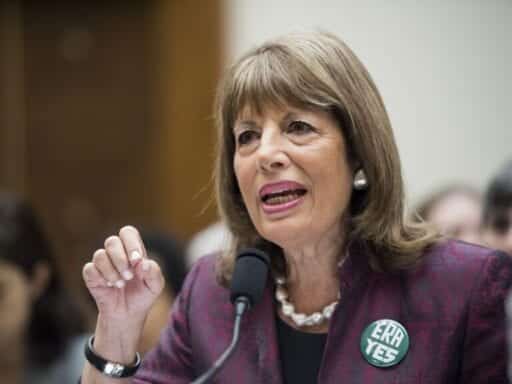 The House Judiciary Committee passed a resolution that eliminates the deadline for ratifying the ERA.

The House on Wednesday took a major step in clearing the way for the advancement of the Equal Rights Amendment, an amendment to the Constitution that would offer all Americans equal legal protections regardless of sex. A resolution passed by the Judiciary Committee this week could bring the measure significantly closer to fruition.

It might seem like odd timing to take a vote on the Equal Rights Amendment. It was first passed by the House and Senate in 1972 and after an initial flurry of states approving it (the next step needed to amend the Constitution), momentum died down for over three decades. But there’s recently been new energy, and Democrats retaking the Virginia state legislature earlier this month means it’s closer to becoming a reality than ever.

The amendment still needs two things to happen in order to move forward: It requires ratification by three-fourths — or 38 — states. And it requires Congress to change the deadline for ratification, which was previously set as 1982.

With Democrats now in control in Virginia, the state is poised to become the 38th state to ratify the ERA. In light of that momentum, House lawmakers are now trying to remove the prior ratification deadline. The Judiciary Committee this week approved a resolution that would do just that and it’s now up for a vote by the full House, where it’s likely to pass with the Democratic majority.

If this resolution is ultimately approved by the House and the Senate, the measure could potentially become an amendment to the Constitution. What that would guarantee is equal protection under the law for all individuals, a change that could lead to wide-ranging updates to existing policies, according to the New York Times’s Maggie Astor:

For women, it would bolster pay equity, domestic violence laws and pregnancy discrimination protections, among many other things. It could also affect men, such as by guaranteeing paid paternity leave equal to maternity leave.

The momentum behind the ERA has lagged since its congressional passage several decades ago, but interest in it has been rekindled in recent years — a product, in part, of a growing focus on gender equity, as Vox’s Emily Stewart noted:

Activists point to a number of factors contributing to the amendment’s revival, including the #MeToo movement, the backlash to Donald Trump’s presidency and Hillary Clinton’s 2016 loss, and the number of women who have entered into the political arena as of late. During the 2019 State of the Union address, many Democratic women in Congress wore pins that read “ERA Yes.”

The Senate, too, has its own resolution that would eliminate the deadline needed for its ratification, but it’s currently unclear how the upper chamber plans to handle the measure.

Trump’s Israel-Palestine peace plan: Read the full text of his so-called “deal of the century”
The summer solstice is here: 6 things to know about the longest day of the year
What was fun?
On eating watermelon in front of white people: “I’m not as free as I thought”
The US embassy in the UK is telling Americans to “keep a low profile” during Trump’s visit
Carbon offsets, explained in 500 words