House Democrats will keep their majority for two more years 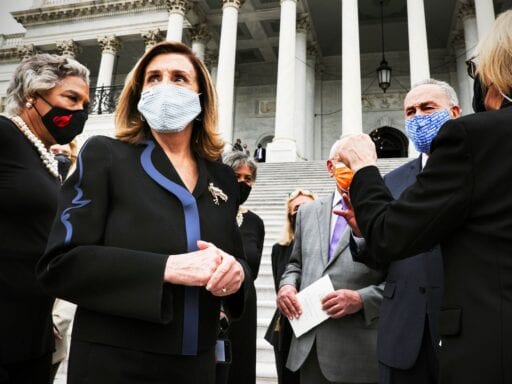 Democrats will keep the House. But Republicans had a better night than expected.

House Democrats did not have the election they expected.

Decision Desk HQ projected Democrats will keep their majority in the House after calling races for Democratic Reps. Abigail Spanberger in Virginia and Tom O’Halleran in Arizona, officially bringing their count to 219 seats. Many more races have yet to be called.

Democrats faced unexpectedly stiff competition from Republican candidates in multiple districts. Rather than expanding their majority as many Democrats — and nonpartisan forecasters — expected, the Democratic margin in the House appears to be shrinking after they first flipped the chamber in 2018.

The story of the night for House Republicans was the success of Republican women candidates. Republicans flipped back six seats as of Wednesday morning, with Democrats only flipping two open seats in North Carolina. More races have yet to be called.

Led by House Speaker Nancy Pelosi, Democrats were widely expected to retain control of the lower chamber of Congress after they gained the advantage in the 2018 midterms. Pelosi and Democratic Congressional Campaign Committee Chair Cheri Bustos (D-IL) were projecting confidence going into the night, yet Bustos herself wound up in a much closer battle for reelection.

Democrats controlling at least one chamber is still an important result. With Joe Biden formally becoming President-elect, Democrats will control the House of Representatives and the White House, but the party’s chances to take back the Senate come down to two uncertain runoffs in Georgia.

And even though Democrats invested big in Texas, hoping to replicate early success in 2018, they didn’t manage to unseat a single Texas Republican member of the House in 2020. Democrats hung on to the two Texas seats they flipped in 2018, but failed to pick up any additional seats.

Why Democrats didn’t gain more in the House

It’s too early to say exactly what went wrong for House Democrats, who broadly expected to take even more seats. District-level internal party polling had shown Republicans with the potential to lose even more seats in 2020.

Many Republican strategists had resigned themselves to the possibility that their House ranks could decrease. Instead, Republicans were the ones making gains — albeit modest enough ones to stay the minority party in the House.

Cook Political Report’s House editor Dave Wasserman had some early thoughts on Wednesday: Just like Biden, Democratic congressional candidates suffered losses among Hispanic voters in key races. Democrats had bad nights particularly in Florida and Texas; they lost a couple of incumbents in Florida and didn’t defeat a single Republican incumbent in Texas, despite making a massive investment in the state to target 10 districts.

Republicans also learned from their losses in 2018 and recruited top-tier women candidates, who were on a winning streak.

“After last night, Republicans are on track to more than double their current count of 13 women,” Wasserman wrote.

The one bright spot for Democrats is that first-term women candidates, particularly those from national security backgrounds, largely held their own in competitive races. After sounding the alarm for months that the political environment was closer than the polls showed, Michigan Rep. Elissa Slotkin (D) won her race on Wednesday; races for Reps. Mikie Sherrill (D-NJ), and Elaine Luria (D-VA) haven’t been called by Decision Desk yet.

These outcomes all elude a clean narrative. It’s difficult to say early on how much is based on strategic error, and how much is owed to the bizarre nature of this election year — amid a pandemic that significantly hampered Democrats’ ability to do basic campaigning tasks like door-knocking.

“Prior to Tuesday, most Republican strategists were privately resigned to the prospect of a double-digit loss of seats,” Wasserman wrote. “At this writing, Republicans may be on track to pick up between five and ten seats in the House, ironically about where our expectations started this cycle — but certainly not where they ended.”

Progressive Rep. Alexandria Ocasio-Cortez (D-NY), who easily fended off her own well-funded challenger, said that many embattled House Democrats failed to invest enough in digital advertising.

Two years after sweeping races across the country, the party now has to figure out what went wrong for their congressional candidates in 2020.

House Democrats may well have to contend with a Republican Senate

House Democrats have spent the past two years passing bills at a rapid clip, on everything from sweeping anti-corruption reforms to lowering the cost of prescription drugs to a $1.5 trillion infrastructure bill. But the vast majority of these bills were dead on arrival in the US Senate. It seems likely this ambitious agenda could continue to be on ice, unless Democrats flip two Georgia Senate runoff races that will be decided in January.

One of the few bipartisan pieces of legislation Pelosi, Mitch McConnell, and President Trump were able to agree on was the $2.2 trillion CARES Act at the beginning of the pandemic; a second stimulus package has been held up by partisan bickering. McConnell recently signaled willingness to pass another stimulus package before the end of the year. He called it a “top priority” for the Senate’s lame-duck session but was vague on concrete details.

Even on infrastructure — one of the few places where there seemed to be bipartisan agreement — getting a bill through could be elusive. Should Democrats flip the Senate, Pelosi has provided them a road map.

But it’s too early to say if they will get to use it.

Trump’s confusing back-and-forth on fiscal stimulus, sort of explained
Celebrating 10 years of Idris Elba becoming James Bond any second now
Trump’s lawsuits challenging the election have turned into a clown show
We are not ready to hold an election during a pandemic. Just look at Ohio.
New shenanigans are afoot in Michigan as Trump tries to block certification of Biden’s win
Trump gifted Kim Jong Un an Elton John CD with the song Rocket Man