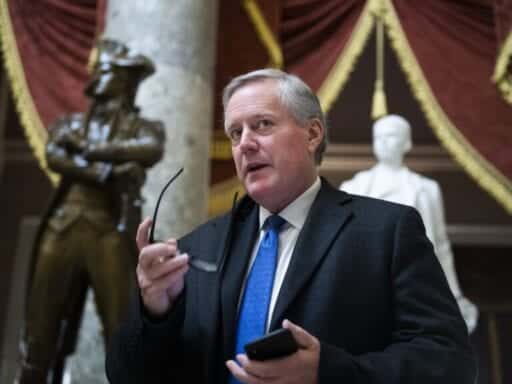 But he says, “My work with President Trump and his administration is only beginning.”

Rep. Mark Meadows (R-NC), a founding member of the conservative Freedom Caucus and staunch ally of President Donald Trump, is retiring from Congress — quite possibly to start working for Trump more directly.

“For everything there is a season. After prayerful consideration and discussion with family, today I’m announcing that my time serving Western North Carolina in Congress will come to a close at the end of this term,” Meadows wrote in a statement posted on his website.

Meadows, who will become the 24th House Republican to retire from the House of Representatives in advance of the 2020 election, has been one of the most right-leaning members of Congress. He signed onto the Tea Party’s “Contract from America” in 2013 and helped push other Republicans toward supporting a government shutdown over funding the Affordable Care Act that same year.

And as a part of the House Freedom Caucus, Meadows helped to move House Republicans in a more conservative direction under President Barack Obama.

As the Pew Research Center detailed in 2015:

The group’s defiance of Speaker John Boehner, over issues such as fast-track trade authority and defunding Planned Parenthood, contributed to Boehner’s decision last month to quit the job. And the group’s decision not to back House Majority Leader Kevin McCarthy prompted McCarthy to pull out of the race and positioned the Freedom Caucus as a kingmaker.

Under Trump, however, the Freedom Caucus has moved toward the president’s viewpoints (conservative or no), with Meadows’s assistance. When Rep. Justin Amash (I-MI), then a Republican, argued that Trump’s actions might be worthy of impeachment in June of this year, Trump reportedly spoke with Vice President Mike Pence and Meadows regarding finding a primary challenger to Amash (who, incidentally, co-founded the House Freedom Caucus with Meadows.)

Those political moves were a winning strategy for the now-60-year-old Congress member. Meadows’s district, NC-11, is staunchly Republican and highly unlikely to change party hands even with his retirement. As my former colleague Tara Golshan detailed in a profile of Meadows in 2017, the right-leaning nature of Meadows’s district shaped his politics and political decisions, including his support for Trump:

It’s the kind of dynamic that has allowed Meadows to sit at an extreme of his party: He comes from a safe conservative district, with a fondness for tactics that force Republicans to move to the right.

That’s how he explains his oppositional perspective at the outset of arriving in Congress. “I assumed the conservatives would be a major part of the Republican Party,” he said of when he first got to Washington. “Perhaps it’s my definition of conservative versus someone else’s definition. The difference is when we say it, we mean it.”

One source I spoke to said that Meadows’s decision to retire may have something to do with reports that he might be contributing to efforts to defend Trump during his Senate impeachment trial. I reached out to Meadows’s office for further comment and will update if and when I hear back.

As Politico reported earlier this week, Meadows is under consideration for a group that would help support the president:

One idea under consideration is to allow a collection of House Republicans — who would be fresh off defending Trump in the House — to present a minority report on the Ukraine affair and make their case on the Senate floor, similar to the role Democratic impeachment managers are expected to play in the trial. The idea has been under discussion for several weeks, according to one GOP member familiar with the talks.

And in Meadows’s retirement statement, he wrote, “My work with President Trump and his administration is only beginning.”