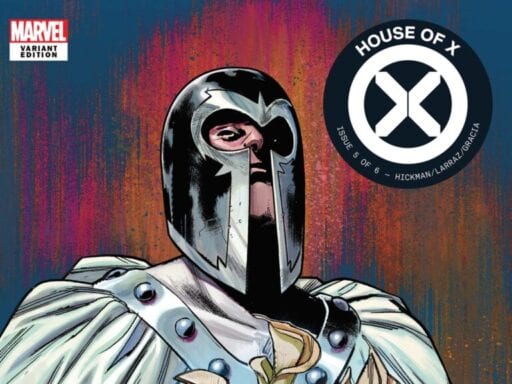 Marvel’s House of X works because it doesn’t take the X-Men for granted.

One issue into Marvel’s new X-Men comic House of X I knew I had found my favorite new comic book. Now five issues later and four issues into its partner series (the fifth companion issue of Powers of X is out on Wednesday), I still have no solid idea what I’m reading or where these comics are taking me — and it makes me love them even more.

The entire premise of both comics was to yank out everything X-Men fans — devout and casual — knew about the X-Men, all through an expanded role for the previously underused character Moira MacTaggart.

In just a handful of issues, writer Jonathan Hickman and artist Pepe Larraz established that after she dies, Moria has the power to reset herself and her own timeline back to the day she gains consciousness (as a fetus), while holding onto all the knowledge, memories, and experience of the life she just lived. The catch is Moira only has up to 11 lives, according to a pre-cog mutant named Destiny, to use this power and to shape mutantkind.

And now, as of issue five, Moira is either on her last or second-to-last life.

During her previous nine lives (including a mysterious sixth one that Hickman and Larraz haven’t told us about yet), Moira achieved some lofty goals: Earth’s mutants are united and now live on their own sentient country called Krakoa. They’ve seemingly eliminated a future threat, the rise of mutant-killing machines, too. Yet, as House of X has flexed in its previous issues, it’s when everyone’s comfortable that we should start getting scared.

How House of X saved the X-Men

One of the best things about House of X is how Hickman and Larraz have continually embraced some of the least-known and strangest X-Men characters in recent memory. They did that by focusing on Moira’s power and have done it again in the most recent issue.

Thanks to Moira’s sacrifice and knowledge gleaned from her ninth life, the X-Men know that humans have started to develop an AI system that will eventually, in the distant future, be an all-powerful mutant-hunting machine. After figuring out when this system goes online, Professor X and Magneto assemble a team of X-Men to go into outer space and destroy the AI (which is out in space) by launching it into the sun. The mission goes south, resulting in the deaths of Jean Grey, Archangel, Cyclops, Nightcrawler, Monet, Husk, Mystique, and Wolverine — but they do, after sacrificing their lives, end up destroying the AI before it goes online.

Shattered and broken by the loss, Professor X curses at humanity and how it always ends — signaling that extreme matters will be taken. A war? A human genocide? Time travel? .

Nope; the answer is none of those. It is: Goldballs.

Goldballs is the codename of one Fabio Medina, a mutant with the ability to make balls of gold. Medina was introduced in volume 3, issue 1 of Uncanny X-Men, written by Brian Michael Bendis and drawn by Chris Bachalo in 2013. Medina was joined by a series of younger, new mutants who Cyclops brought together. Medina’s power was largely played for laughs, as he was unable to control the balls he was making in the heat of battle.

On that team, Medina was joined by a time-traveling mutant named Eva Bell, but for whatever reason — maybe for being too powerful or too gimicky or too on the nose (one of the new X-Men was a gay man named Benjamin Deeds who could shape-shift to make people feel at ease around him, an obvious allegory for intolerance) — they were largely forgotten.

And yet, Hickman took one of the X-Men’s best, dumbest superpowers and finessed it into one of their most powerful.

Add in a mix of healing powers from a mutant named Elixir, time travel from Eva Bell, reality warping from Proteus, synergy from Hope Summers, and some identity and consciousness transplants from Professor X, and the X-Men have essentially figured out how to rebirth the mutants who died in that final mission and any who could die in the future:

There is still a feeling of unease, however. Remaking new mutants after old ones die can’t be the status quo of storytelling. Future issues can’t just be about the mutants waiting for these gold eggs to hatch. Something has to happen to make this process a bit more complicated, and it feels like it will — which is a remarkable way to set up intrigue going forward.

With House of X, Hickman shows that he is constantly thinking of news ways to think about these dead-end beings. Like he did with Moira, Hickman has turned Goldballs and his crew of forgotten X-Men into full-fledged characters with intriguing powers. He and his cohort, along with other forgotten mutants, have seemingly become more powerful, but not to the point where their existence breaks storytelling. To do what Hickman did with these esoteric characters offers fidelity to the larger X-Men canon.

House of X’s greatest mystery is what happens next

After all of Xavier’s mutants are reborn, Hickman has one more game-changing ace up his sleeve. At the end of issue five, X-Men supervillains Apocalypse, Exodus, and Mr. Sinister all arrive on the island of Krakoa, and they agree to live there and protect the livelihood of all mutants:

Given that these people are supervillains with evil tendencies, it seems as though this feel-good reunion and truce can’t stand. Mr. Sinister especially likes to tinker with DNA and mutant genetics, and Moira has witnessed Sinister genetically engineering mutants in one of the timelines she’s seen. And we don’t know if the future that the X-Men avoided — the mutant-hunting AI — has been fully avoided.

When it comes to mysteries, Moira herself has been conspicuously absent for the last couple of issues. We don’t know what she’s up to, what she’s planning, or what she thinks of this mutant unity. Nor do we know if this, her 10th life, is her actual last one or if there’s one more. We still don’t know what happened in Moira’s sixth life.

No matter how this story ends, Hickman and Larraz have breathed new excitement into the X-Men. Whether it’s taking a character like Moira or Goldballs into a new direction or simply injecting new mysteries and mythos into the X-Men universe, for the first time in what feels like years X-Men feels fresh and original. And it’s been a deep pleasure to read, even knowing some of my favorite characters are just a little too cozy for comfort.