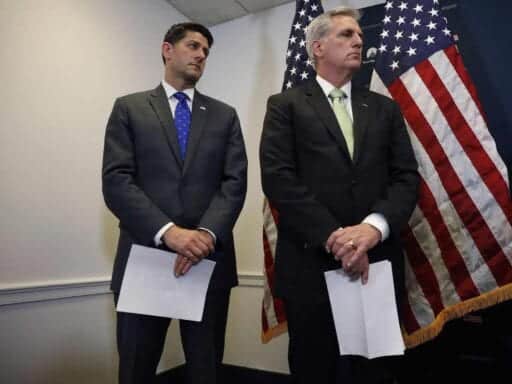 House Republicans are backtracking on their idea to allow a vote on Democrats’ controversial “Abolish ICE” bill, worried their political stunt would backfire.

Last week, House Majority Leader Kevin McCarthy told reporters that the House would bring up a vote on a progressive proposal that would disband the Immigration and Customs Enforcement agency (ICE), which has purview over immigration law in the country’s interior, within a year.

Republicans calculated that “Abolish ICE” is a losing message for Democrats in the 2018 midterms, especially as Democrats try to flip Republican-leaning districts across the country. The idea was to put Democrats in a bind; force them to either splinter with an increasingly progressive base on immigration or risk the larger electorate on a still unpopular message. According to a recent survey by Morning Consult/Politico, 54 percent of the Americans are against abolishing ICE.

But House Speaker Paul Ryan reportedly put the kibosh on the idea after it became clear that Democrats would vote against their own bill en masse.

Democrats called Republicans’ stunt early on; the three Democratic co-sponsors of the “Abolish ICE” bill — Reps. Mark Pocan (D-WI), Pramila Jayapal (D-WA) and Adriano Espaillat (D-NY) — said they would vote no on the bill if Republicans bring it to the floor. The Congressional Hispanic Caucus also came out against the proposal.

“We know Speaker Ryan is not serious about passing our ‘Establishing a Humane Immigration Enforcement System Act,’ so members of Congress, advocacy groups, and impacted communities will not engage in this political stunt,” the bill’s sponsors said in a statement last week.

So instead, Republicans say they are going to vote on another immigration this week — a Republican resolution from Rep. Clay Higgins (R-LA) that expresses support for ICE’s work.

“After being called on their bluff, Democrats ran scared from their own bill,” Ryan’s spokesperson Ashlee Strong said, according to Politico. “Democrats will now have the chance to stand with the majority of Americans who support ICE and vote for this resolution, or follow the extreme voices on the far left calling for [abolition] of an agency that protects us.”

This episode is emblematic of the state of Congress’s debate on immigration. Lawmakers continue to be faced with several major unresolved immigration policy issues — from family separations at the border to the shaky legal status of the Deferred Action for Childhood Arrivals (DACA) program. But the only movement on the issue appears to be aimed at winning political points.

Lil Nas X’s lone CMAs nod is faint praise from country music’s biggest award show
Can a pandemic remake society? A historian explains.
How politics, inequity, and complacency undermined Texas’s fight against Covid-19
The 9 films that explain the legendary Studio Ghibli
The NBA might be returning this summer — in Disney World
House Democrats have passed nearly 400 bills. Trump and Republicans are ignoring them.