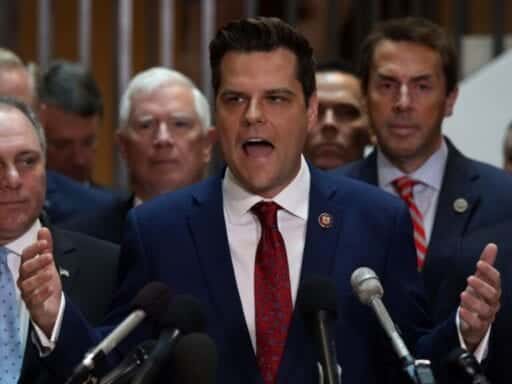 Here’s why House Republicans stormed into an impeachment deposition on Wednesday.

For weeks, House Democrats have been deposing current and former Trump administration officials behind closed doors as part of their impeachment inquiry — and for just as long, Republicans have been lambasting the secretive process, using those complaints to distract from the substance of the probe.

Things reached a boiling point on Wednesday, as a slew of House Republicans, including ones not on the committees overseeing the inquiry, descended on the House SCIF — the secure room where the depositions are being held.

“Behind those doors, they intend to overturn the results of an American presidential election,” argued Rep. Matt Gaetz, the Republican who quite literally led the charge of more than two dozen lawmakers into a highly secured area where they were not supposed to be.

The entrance and ensuing shouting from Republicans inside the SCIF was meant to be a major disruption, and it was. Roughly 30 Republicans reportedly rushed past police officers and occupied the room for hours, even ordering pizza at one point — all to delay witness testimony from Pentagon official Laura Cooper. And soon after, Democrats discovered that some of these Republicans had their cellphones on them; a major breach of SCIF protocol.

“The whole thing was threatening. Shouting back and forth,” Rep. Gerry Connolly (D-VA), a member of the Oversight and Foreign Affairs Committee, told Vox. “I sat down, and all of a sudden the room filled up with non-committee members. Initially it was a little hard to realize what was happening. In fact, to be honest with you, I got a little concerned.”

Cooper eventually began testifying after a mid-afternoon House vote — which could mean a long night for committee members and staff, as past depositions have gone for 9 to 10 hours. But impeding the inquiry was only part of the point. Today’s gambit by Republicans is the latest attempt to refocus an explosive impeachment inquiry into the president’s conduct with Ukraine on process, rather than substance.

These types of complaints are often pushed by the subject of the inquiry himself — President Trump.

“Corrupt Congressman Adam Schiff is angry that Ambassadors that he thought would be good for his fraudulent Witch Hunt, are turning out to be good for me – some really good!” Trump tweeted last week. “He’s got all meetings locked down, no transparency, only his illegal leaks. A very dishonest sleazebag!”

Now, the day after closed-door testimony from the former ambassador to Ukraine that looked particularly damning for President Donald Trump, Republican complaints about the secrecy of the process are growing much louder.

The Republicans who were initially barred from the SCIF aren’t members of the House Oversight, Foreign Affairs or Intelligence Committees, which are overseeing the inquiry. Republicans who are part of these committees have been able to fully participate in the closed-door interviews, as Schiff has explained in the past, but that didn’t stop several of them from attaching their names to the protest anyway.

Important to remember that GOP&Dem members have been part of impeachment depositions this whole time.

All you need is to sit on the relevant committees.

If these guys are so mad, maybe they should take their little flash mob to the @GOPLeader who didn’t assign them to the task. https://t.co/c8arhzmqwi

Schiff spent much of this week breaking down why House Democrats are interviewing witnesses behind closed doors for now: In a letter to his colleagues last week, Schiff noted that many interviews have been private in order to prevent witnesses from coordinating their stories. But Democrats are planning to turn to public hearings in the next phase of their inquiry, and Schiff added transcripts of the testimony would ultimately be made public down the line.

While House Republicans want to put pressure on Democrats, their Wednesday crusade revealed how much heat they and Trump are facing regarding the impeachment inquiry: they don’t seem to have much substantive defense they can offer the president, so instead, they’re going after Democrats’ process.

Why impeachment proceedings have been behind closed doors, briefly explained

Republicans haven’t been the only ones to question why depositions for the impeachment inquiry, including interviews with several witnesses, have been behind closed doors. But Schiff has argued there are good reasons for doing it that way: Not only is it historically common in impeachment inquiries, it’s also so that witnesses don’t coordinate what they wind up saying.

“It is of paramount importance to ensure that witnesses cannot coordinate their testimony with one another to match their description of events, or potentially conceal the truth,” Schiff wrote in a letter to his House colleagues last week. Schiff emphasized that public transcripts of these depositions would be released in the future, and also anticipated that testimony would ultimately be public as well.

“At a time that it will not jeopardize investigative equities, we will make the interview transcripts public, subject to any necessary redactions for classified or sensitive information,” he said.

Schiff, too, pushed back against Republican arguments that House Democrats are trying to hide impeachment proceedings and keep them under wraps. He noted that Republican members have participated in every deposition, ranging from that of former Ambassador to Ukraine Marie Yovanovitch to former Trump adviser Fiona Hill.

“It is necessary to point this out, because the President and his allies have made the false claim that GOP members and staff have been precluded from attending or asking questions — nothing could be further from the truth,” he wrote. Roughly 100 members from both parties, who sit on the House Intelligence, Foreign Affairs and Oversight Committees, have had the opportunity to question witnesses and engage in these depositions.

Additionally, committee chairs have wide latitude to set the rules around their hearings, and past Republican committee chairs have certainly thrown people out of these panels as well. In fact, in 2015, Benghazi Select Committee Chair Trey Gowdy (R-SC) threw a fellow Republican — former House Oversight Chair Darrell Issa (R-CA) — out of a closed-door hearing.

“So the rules have changed?” Connolly said incredulously to Vox. “The rules are what they have always been, or are longstanding. It’s a completely specious argument, and the fact they are willing to resort now to physical defiance is something I hope they really think long and hard about.”

“House rules and committee rules allow the Intel committee to close hearings and other meetings behind closed-doors,” said George Washington University political science professor Sarah Binder. “The House — and its committees — adopt their rules by majority vote at the start of each Congress.”

As agreed upon, House rules limit the members who are able to participate in the impeachment inquiry’s closed-door interviews. Because these interviews are classified as “depositions,” only the members and staff of the relevant committees are able to attend them.

The use of closed-door witness interviews is also consistent with how fact finding for previous impeachment inquiries has been conducted, the Wall Street Journal’s Natalie Andrews reports:

Independent counsel Ken Starr conducted his probe of President Clinton using a grand jury, which by law conducts all its business behind closed doors. In Watergate, special counsel Leon Jaworski also used a grand jury to collect evidence that he eventually transmitted to Congress during its impeachment inquiry. Much of the legal work analyzing the evidence collected by Mr. Jaworski’s prosecutors was done behind closed doors by congressional lawyers.

Several of the key players in Watergate did end up testifying publicly in front of the Senate Watergate committee, but that was a separate investigation from the House impeachment inquiry.

In addition to Republicans’ breach of House deposition rules, members who brought their cellphones into the secure space were violating the protocol on SCIFs, which individuals are not able to enter with such devices. Ultimately, as Politico reports, the House Sergeant at Arms — a law enforcement official based in the Capitol — arrived at the SCIF and conducted a sweep for surveillance devices because of this breach.

It may not have been a coincidence that Republicans were attempting to barge into the House SCIF the day after explosive testimony from Trump’s former top diplomat in Ukraine.

On Tuesday, former Ambassador to Ukraine William Taylor told the committees that there was, in fact, a quid pro quo on Ukraine. Taylor said the president made US military aid to Ukraine contingent on Ukraine’s newly elected government announcing it would reopen an anti-corruption probe into a natural gas company that former Vice President Joe Biden’s son Hunter once sat on the board of, as Vox’s Alex Ward noted.

As Taylor and other former and current White House officials have come forward to paint a similar picture of the president’s dealings with Ukraine, Republican leaders have been refusing to engage on the substance of the allegations.

Instead, they want to talk about how this is all happening behind closed doors.

“This is why this process is so backwards, something that this Congress has never done,” House Minority Leader Kevin McCarthy told reporters Tuesday. “There’s nothing happening inside there that is classified. This should happen in the light of day and members should be able to have input.”

According to a Bloomberg report, Trump was aware of House Republicans’ Wednesday plans to storm the SCIF, discussing the matter with lawmakers during a Tuesday meeting they had about the impeachment inquiry. He suggested that more transparency regarding the interviews would help exonerate him from potential charges, Bloomberg notes.

Republicans complaining about the process around impeachment is nothing new. It’s something we’ve seen since Trump’s White House released a letter on October 8 refusing to comply with any aspects of the impeachment inquiry — arguing the inquiry was “constitutionally invalid” because the House has not yet done a full floor vote to authorize impeachment (a dubious legal argument, as Vox explained).

Those process complaints are useful distractions from the growing allegations against Trump, and for Republicans who don’t want to engage with the facts the inquiry is uncovering. At least one high-ranking Republican senator, John Thune of South Dakota, acknowledged those facts paint “not a good” picture about the president’s conduct.

“The picture coming out of it based on the reporting we’ve seen is, yeah, I would say it’s not a good one,” Thune told reporters. “But I would say also, until we have a process that allows for everybody to see this with full transparency, it’s pretty hard to come to hard and fast conclusions.”

Kellyanne Conway’s alleged 2018 assault, explained
The US needs real-time data to fight the pandemic. We’re still not even close.
Foreign policy was a loser in the Democratic debates
The QAnon supporters winning congressional primaries, explained
The layoffs at Airbnb cast a dark shadow over Silicon Valley
The Supreme Court just stripped thousands of teachers of their civil rights