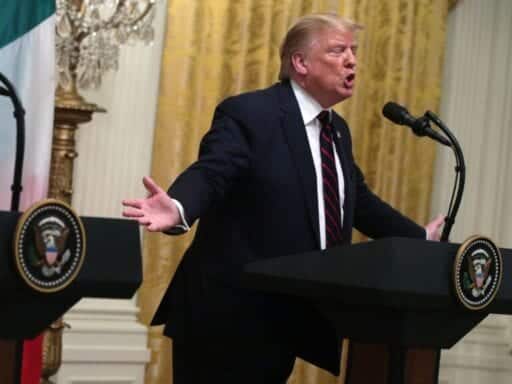 Share
Loading...
US President Donald Trump speaks during a joint news conference with President Sergio Mattarella of Italy in the East Room at the White House on October 16, 2019, in Washington, DC. | Alex Wong/Getty Images

Congress is pushing back on Trump’s decision to withdraw US troops from Syria.

In a bipartisan rebuke to President Donald Trump, the US House of Representatives has overwhelmingly passed a resolution condemning his decision to pull United States troops out of Syria, abandoning US allies in the region as Turkish troops have moved in.

The 354-60 vote on the resolution Wednesday was largely symbolic, but it signaled the widespread disapproval among lawmakers for Trump’s latest controversial foreign policy move. It came as fighting continued in northeastern Syria between Turkey and Kurdish fighters, who have been a key US ally in fighting the terror group ISIS.

“At President Trump’s hands, American leadership has been laid low, and American foreign policy has become nothing more than a tool to advance his own interests,” said House Foreign Affairs Committee Chair Eliot Engel (D-NY), who introduced the resolution. “Today we make clear that the Congress is a coequal branch of government and we want nothing to do with this disastrous policy.”

Trump’s decision to pull out American troops pleased Turkish president Recep Tayyip Erdoğan, who promptly moved his troops in to fight Kurdish militias he views as a threat. But it inflamed both congressional Democrats and Republicans on Capitol Hill. This follows a pattern; Republicans have been most willing to rebuke Trump on his foreign policy choices, including a vote to end the Saudi war in Yemen. Some who have otherwise defended Trump throughout his impeachment inquiry in the House have been quick to criticize him on the chaos he’s causing in the region — fearing it will spur a reemergence of ISIS.

“The entire region will suffer the consequences of some very bad actors getting back on the battlefield again because of that,” said Sen. James Lankford (R-OK) on the Senate floor Wednesday. “The administration clearly did not coordinate with the State Department, with the Department of Defense, with what was happening in the region, to make sure we were securing those fighters and preparing for that moment.”

The non-binding resolution reiterates the House’s opposition to the pullout of Syria troops and calls on Turkey to stop its military action in the country. It also asks Trump to present a plan to combat and defeat ISIS in the region. Both the House and Senate are considering sanctions packages in the coming days that go beyond the White House’s proposed punitive measures against Turkey.

It appears Trump is shutting down communication with Congress on Syria; the White House abruptly canceled a bipartisan all-member Congressional briefing on the situation, per a tweet from House Speaker Nancy Pelosi.

I am deeply concerned that the White House has canceled an all-Member classified briefing on the dangerous situation the President has caused in Syria, denying the Congress its right to be informed as it makes decisions about our national security.

However, Pelosi and other Democratic Congressional leaders still met with Trump on Wednesday, during which Pelosi said the president had a “meltdown.” Upon exiting the White House, she and others recounted an explosive meeting with Trump. Pelosi told reporters outside the White House that Trump appeared “shaken up” by the House vote during a meeting she and other Democratic leaders had with the president.

“That’s why we couldn’t continue in the meeting, because he was just not relating to the reality of it,” Pelosi said.

“What we witnessed on the part of the president was a meltdown,” Pelosi added. “Sad to say.”

At an earlier press conference Wednesday, Trump appeared to endorse Russia taking on more of a role in the region, another viewpoint that alarmed congressional Republicans. A bipartisan Senate version of the House resolution condemning Trump’s move was also introduced Tuesday. But there’s not a lot of teeth in these resolutions.

Senate Republicans don’t break with Trump on much, but the president’s decision to withdraw troops from northern Syria has prompted significant pushback from several of his allies in the upper chamber. Although Republicans appeared to reconcile some concerns earlier this week, statements that Trump made during a press appearance on Wednesday have seemingly caused the conflict to flare up once more.

Sen. Lindsey Graham (R-SC), one of Trump’s stalwart supporters in the Senate, shot back quickly regarding the president’s comments. “If the president did say that Turkey’s invasion is no concern to us, I find that to be an outstanding — an astonishing statement which I completely and totally reject,” he told NBC News. Graham elaborated on his criticism in a Twitter thread, emphasizing that Trump’s statements could lead to a “disaster worse than President Obama’s decision to leave Iraq.”

However, I firmly believe that if President Trump continues to make such statements this will be a disaster worse than President Obama’s decision to leave Iraq.

Trump’s decision to remove troops from Syria has previously prompted questions from many Republicans who have favored American intervention in the region and voted to preserve it. Sens. Pat Toomey (R-PA), Mitch McConnell (R-KY), and Joni Ernst (R-IA) were among those who argued that Trump’s actions were a “betrayal” of the United States’ Kurdish allies, when he made the announcement last week.

On Monday, Trump said he would impose sanctions on Turkey in an effort to curb the country’s military onslaught in northern Syria, a move that has not appeared to deter Turkish forces. Trump’s decision appeased some Republicans including Graham, however, prompting them to applaud the president’s attempts to target Turkey.

“Given the events that have happened at this point, it’s probably the most you can do in the short term,” Sen. Marco Rubio (R-FL) told Politico.

Trump’s comments on Wednesday and the ongoing military offensive from Turkey have sustained renewed pushback in the Senate, though. In addition to the Republican uproar, Senate Democratic leaders are calling for lawmakers to back the House’s bipartisan resolution condemning the President’s decision to remove troops in the region.

“Sanctions against Erdoğan are fine and good. President Erdoğan should be punished for his military adventurism and his aggression. But sanctions alone are insufficient,” Senate Minority Leader Chuck Schumer said in a floor speech Wednesday.