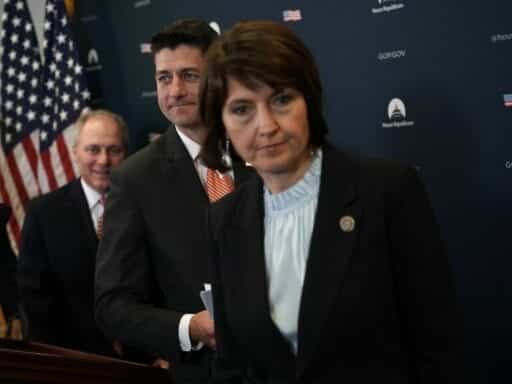 Washington Rep. Cathy McMorris Rodgers, the highest-ranking Republican woman in the House, is facing the most competitive reelection bid of her career.

On Tuesday, Washington voters will pick the top two candidates in the state’s jungle primary system to run in November’s midterm elections. McMorris Rodgers and the only Democrat in the race, Lisa Brown, formerly the state’s Senate majority leader and chancellor of Washington State University Spokane, are expected to make it to the general election.

McMorris Rodgers, the chair of the House Republican conference and the fourth-ranking Republican in Congress’s lower chamber, has been in office since 2005. She’s never really had to worry about running for reelection — a political reality that has allowed her to climb the ranks in Republican leadership.

But this year, Democrats are holding the district’s vibrant political history over McMorris Rodgers’s head. Washington’s Fifth Congressional District was once represented by Democrat Tom Foley, who in 1994 became the first modern-day House speaker to be unseated in reelection. Now, in a year when Democrats hope to make sweeping gains in Congress, they want to give McMorris Rodgers the Foley treatment.

And Brown has proven to be a formidable challenger. The Cook Political report has already changed the district’s rating to Lean Republican, hinting at the possibility of a competitive race in November. Trump won the district in 2016, but only with 52 percent of the vote. Cook rates the district as R+8 — a margin Democrats have already overcome in other parts of the country. Elway Research Inc., a polling firm based in Washington, found Brown within single digits of McMorris Rodgers in April. The survey, which had a 5-point margin of error, also found that 16 percent of voters were still undecided.

Tuesday’s primary itself is unlikely to bring fireworks. But elections watchers will be keeping a close eye: Is Brown’s case against the Republican Party’s agenda enough to oust a powerful and heavily financed GOP leader? It’s possible.

Her campaign came under fire in July for controversial ads that misleadingly claimed Brown was “dangerous” for eastern Washington children and soft on sex offenders. The mailers, depicting a small girl swinging on a tree and an ominous hooded figure standing close by, falsely claimed that Brown had voted to allow sex offenders to live by schools. In reality, while Brown voted against one such bill, it was because it was not strong enough. She later voted for a bill that banned sex offenders from living close to schools, playgrounds, and child care centers.

The deceptive strategy aside, the ads were a sign that McMorris Rodgers was going to go on the offensive. And as a Republican incumbent who is part of the House leadership team, she will be afforded a lot of resources.

“When you are in leadership, you basically have access to unlimited to outside money,” one Democratic campaign aide told Vox. “Cathy is not someone who is asleep at the wheel. She is not letting the race get away from her.”

But Trump and the Republican agenda have complicated things for McMorris Rodgers.

The economy in Washington’s Fifth District isn’t centered on companies like Amazon and Microsoft with their headquarters in the state; the district is rural. Jobs are in agriculture, an industry that’s been increasingly concerned with the fallout from President Trump’s protectionist trade agenda.

Meanwhile, the Republican-controlled Congress spent nearly half of Trump’s first year in office trying to repeal Obamacare, with a proposal that, had it passed, would have made sweeping cuts to Medicaid, a federal low-income health care program that many of McMorris Rodgers’s constituents rely on.

Then they spent the second half of that year working to pass a tax bill that gave corporations massive permanent tax cuts while marginally cutting taxes for individuals in the short term. McMorris Rodgers, whose leadership position in Congress includes communicating Republican messaging to the party, has put the tax bill front and center this midterm election cycle.

The Republican agenda has been front and center in Brown’s campaign as well; she called the tax bill a boon for Wall Street, attacked McMorris Rodgers for her ties to the pharmaceutical industry, and warned against the impact Republicans’ tax cuts would have on the national debt.

And in a year when being a House Republican seems to be more a vulnerability than an asset, McMorris Rodgers’s career might be on the line as a result.

The case for prosecuting the Sacklers and other opioid executives
Is there a humane way to boil lobsters alive? One woman thinks it’s by getting them high.
America’s Covid-19 vaccine rollout is way too complicated
What celeb trainer Jillian Michaels got wrong about Lizzo and body positivity
What poll watchers actually do, and Trump’s troubling rhetoric about them, explained
Joe Biden is the only candidate with a real shot at getting things done