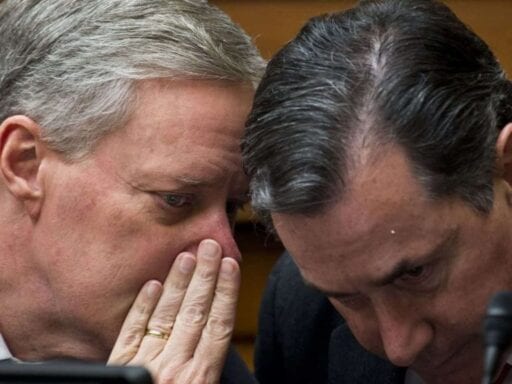 House Republicans have joined the fight to stop the District of Columbia from raising wages for restaurant servers and other tipped workers in the city. Two GOP lawmakers, Reps. Mark Meadows (R-NC) and Gary Palmer (R-AL), quietly introduced an amendment Tuesday to the House’s government spending bill for 2019, which would essentially block a local ballot measure, called Initiative 77, from going into effect.

In June, voters in the nation’s capital approved Initiative 77 to require DC businesses to pay restaurant servers and other tipped workers the full minimum wage. The new law would slowly raise the sub-minimum wage for tipped workers from $3.33 to $15 an hour by 2025.

On Tuesday, less than a month after the vote, lawmakers and business groups began their push to overturn the new law. Seven of the city’s 13 council members introduced a bill Tuesday to repeal it. Now Congress is flexing its control over DC’s budget to prohibit the city from spending money to enforce the law.

The nation’s capital was poised to become the first major city to phase out the sub-minimum wage for tipped workers. If the DC city council bill passes, which seems likely since a majority of the council introduced it, it will put the brakes on a growing movement to outlaw the practice of letting employers pay a lower hourly wage to workers who earn tips, a practice that is already illegal in seven states. But even if the repeal bill fails, it’s very likely that Republican majority in Congress won’t let it go through.

DC’s ballot initiative seems doomed to meet the same fate as Maine’s did last year, when state lawmakers repealed a similar ballot measure voters had passed in 2016 before it went into effect. The pressure from local businesses, the National Restaurant Association, and even some tipped workers, who argued that the initiative had led to lower take-home pay, was enough to sway lawmakers to override voters’ mandate. The same story is now unfolding in Washington, DC.

An economic experiment may end before it actually begins

Initiative 77 was easily the most controversial measure on the ballot in DC’s June 19 primary election, placing the city at the forefront of a national battle over workers’ tips.

Under federal law, businesses can pay certain workers less than the $7.25 federal minimum wage if those workers make most of their money in tips. This has traditionally included restaurant servers, bartenders, valets, and bellhops. Federal law allows them to pay these workers the tipped minimum wage: $2.13 an hour. If the worker doesn’t earn enough tips to make the full minimum wage, the employer must make up the difference.

Under this system, the customer essentially subsidizes workers’ wages with gratuities. Some states require businesses to pay a higher sub-minimum wage to tipped workers than the federal one. Seven states banned the practice decades ago, or never allowed a lower tipped wage at all (California never did). New York and Michigan are now considering a similar ban.

Workers’ rights groups have zeroed in on the tipped minimum wage as one culprit in America’s growing income inequality. Job growth in the restaurant industry has outpaced other sectors of the economy and is expected to continue expanding. But the efforts to abolish the tipped minimum wage have been met with fierce resistance from powerful business groups, such as the National Restaurant Association and local chambers of commerce. They argue that the change will put restaurants out of business or prompt them to slash jobs.

Only two other places, Maine and Flagstaff, Arizona, have recently abolished the practice. But lawmakers in Maine then reversed the measure before it went into effect. The District of Columbia was poised to become the first major player in this modern economic experiment — an experiment that may end before it could begin.

Most restaurant servers in the city barely make minimum wage

When someone eats out at a restaurant in the nation’s capital, the tip they leave behind is not just a show of appreciation — it actually pays most of the workers’ minimum wage. The restaurant owner only has to pay servers $3.33 an hour under the city’s labor laws. At the end of each week, if the tips don’t add up to the local minimum wage of $13.25 an hour, then the restaurant owner has to make up the difference. Initiative 77 will gradually hike the tipped minimum wage by $1.50 each year until it reaches $15 in 2025. By 2026, the minimum wage will be the same for all workers.

Despite the city’s thriving high-end dining scene, the median hourly wage for servers in the city is barely above the minimum wage, including tips. Tipped workers in the city are twice as likely to live in poverty and use food stamps as the rest of the city’s workforce.

Seven states — Alaska, California, Minnesota, Montana, Nevada, Oregon, and Washington — eliminated the two-tier system entirely decades ago or never allowed the practice to start with. The Restaurant Opportunities Center, the nonprofit labor group pushing for equal wages for restaurant workers across the United States, points out that the poverty rate among tipped workers in those states is far lower than the poverty rate for tipped workers in other states. Employers pay the full minimum wage to the 1.2 million tipped workers who live in those states.

And they still earn some tips. Data about tipping rates is scarce, but one analysis of tips left on credit cards shows that customers in states without a lower tipped minimum wage still leave gratuities. Alaska had one of the highest average tipping rates (17 percent); California and Oregon had among the lowest. But even the states that ranked toward the bottom had at least a 15 percent tipping rate.

The best comparison to the situation in DC would have been Maine, where voters approved a ballot measure in November 2016 that would have phased out the tipped minimum wage by 2024. But months after passage, restaurant workers and bartenders said patrons were confused and tipping them less, even though the law hadn’t yet gone into effect. Their voices, plus fierce opposition from the National Restaurant Association, led lawmakers to reverse the ballot measure in July 2017. The tipped minimum wage in the state is currently $5 an hour.

Initiative 77 is headed toward a similar fate.

Vox Sentences: The far-right White House guest
Stranger Things season 3: everything we know so far
The Vox guide to Covid-19 coronavirus
A demonstrator was shot and a man set on fire in Hong Kong’s protests
Violent protests against police brutality in the ’60s and ’90s changed public opinion
A disturbing new study suggests Sean Hannity helped spread the coronavirus