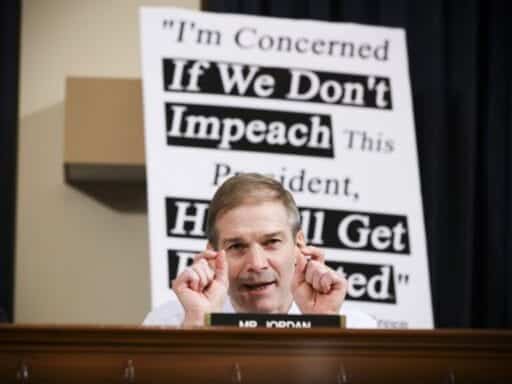 Republicans have repeatedly attempted to shift the focus onto the whistleblower to undermine the substance of the allegations. Wednesday was no different.

For weeks now, Republicans have said they’d like to unmask the whistleblower who filed a complaint about President Donald Trump’s conduct with Ukraine, despite concerns that it could put that individual at risk.

And during the House’s first public hearing in its impeachment inquiry on Wednesday, they kept up this push. Rep. Jim Jordan (R-OH), one of the leading Republicans recently appointed to the House Intelligence Committee, repeatedly emphasized the fact that lawmakers haven’t been able to hear directly from the whistleblower in person.

“This anonymous, so-called whistleblower with no firsthand knowledge, who’s biased against the president … we’ll never get a chance to question that individual,” Jordan said at one point. (The whistleblower’s attorneys have said he’d be open to answering questions from House Republicans directly, in writing. Jordan has previously rejected this option.)

Jordan also suggested that House Intelligence Committee Chair Adam Schiff had knowledge of the whistleblower’s identity, a fact that Schiff repeatedly said was untrue. Following the end of the hearing, lawmakers considered a motion to subpoena the whistleblower for a closed-door deposition, which Democrats voted to table.

Shifting the focus to the whistleblower — and his credibility — was one (of many) diversion tactics employed by the president and congressional Republicans almost as soon as the complaint came to light in September. GOP lawmakers have slammed the complaint as “secondhand” and “hearsay” in a bid to question the allegations that are detailed by the whistleblower, while Trump has suggested that this person is a partisan actor. He’s led the charge in calling for the exposure of the whistleblower’s identity, arguing that he should be able to face his accuser.

Beyond Republicans’ political motivations for pushing this argument, however, there’s little reason to name the whistleblower, since the impeachment inquiry is no longer really about him: The allegations listed in the original complaint have already been corroborated by other witnesses — not to mention Trump himself.

What’s more, whistleblower protection laws, including those that govern the Intelligence Community, enable government employees to file whistleblower complaints confidentially specifically to protect them from potential blowback. As NPR notes, though, there is no law that bars a member of Congress or the president from publicly naming the whistleblower.

In their attempts to undermine the complaint against Trump, Republican efforts to expose the whistleblower could have a massive chilling effect: They could endanger the person who has been named and they could deter future whistleblowers from coming forward.

Since Republicans have struggled to defend the substance of the accusations against Trump, they’ve sought to redirect the focus toward other aspects of the investigation including the process behind the inquiry, Hunter Biden’s ties to a Ukrainian corporation, and, of course, the whistleblower.

Trump’s allies have taken a variety of approaches to call out the whistleblower: They’ve floated names in the closed-door committee depositions and at least one has posted an article on social media that names a specific individual. The whistleblower’s attorneys have declined to confirm his identity.

Republicans are actively focusing on the whistleblower in an effort to sow doubt about both the legitimacy of the complaint and the rationale for filing it. “One of the ways you determine someone’s credibility to determine what their motivation is, what kind of bias they have, is they need to be under oath answering your questions,” Jordan has said during a Fox News appearance.

As their logic goes, if the whistleblower came in with a preconceived bias, that could affect how reliable they are as a witness to wrongdoing.

The party’s dedication to protecting the president makes sense given his ongoing popularity with members of the Republican base, but the emphasis on the whistleblower specifically is something that’s faced resistance from GOP lawmakers as well.

Although lawmakers including Sen. Rand Paul and Jordan have been out front in the push to make the whistleblower publicly known, a number of Republicans have said that the individual’s identity should be protected.

As the law currently stands, the Inspector General who the whistleblower reports the complaint to is required to keep the person’s identity anonymous unless they need to share it as they process the complaint. However, as experts told NPR, there is nothing in the statute that directly limits the president or a member of Congress from divulging the whistleblower’s name.

Several Republican Senators have argued that lawmakers shouldn’t expose the whistleblower. “This person appears to have followed the whistleblower protection laws and ought to be heard out and protected. We should always work to respect whistleblowers’ requests for confidentiality,” Sen. Chuck Grassley said in an October statement.

Sens. Mitt Romney, Susan Collins, and John Thune are among those who told The Hill that the whistleblower protections should stay intact.

“Whistleblowers are entitled to protection under the law … To try to reveal the identity of this individual is contrary to the intent of the whistleblower law,” Collins told The Hill.

This could have some serious consequences

There are a lot of potential consequences from unmasking the whistleblower — few of them good. He could face professional backlash in the form of a firing, demotion, or removal of security clearance. Additionally, the whistleblower might experience personal threats to his safety, a chief reason their counsel has said they would prefer responding to written questions instead of providing in-person testimony.

“As a direct consequence of the President’s irresponsible rhetoric and behavior, my client’s physical safety became a significant concern, prompting us to instead state our willingness to only answer written interrogatories,” Andrew Bakaj, the whistleblower’s attorney, wrote in a letter to White House legal counsel, calling on Trump to stop his attacks.

In the past, Trump’s targeting of lawmakers including Reps. Ilhan Omar and Rashida Tlaib have resulted in a surge of death threats and safety concerns aimed at the two women. It’s possible this could happen with the whistleblower as well, and it’s among the many reasons they’d like to keep their identity secret.

If exposed, the whistleblower also has limited recourse, professionally, because they are a member of the intelligence community. Unlike whistleblowers from elsewhere in the government, they legally aren’t able to publicly discuss retaliation they might encounter because of how sensitive their roles are — and the onus to challenge such blowback would be on them.

While many Republicans continue to use the whistleblower as a flashpoint, the allegations he raised have already been corroborated both by other witnesses and, in part, by the president.

That means the ploy to expose the whistleblower feels much less substantive and much more like a crutch for Republican attacks, Vox’s Andrew Prokop recently told Today, Explained:

It seems more of an effort at retaliation rather than a good faith effort to check their information, because the person’s information has already been completely confirmed at this point by all the documents and testimony from other witnesses that have come out.

The whistleblower’s identity seems pretty irrelevant at this point, but Trump really wants a villain and he is trying to put a face on this whistleblower to have a new hate figure for conservative media to fulminate about deep state conspiracies against the president.

The chief allegations in the original complaint centered on how the president had asked Ukrainian President Volodymyr Zelensky to investigate Hunter Biden, the son of 2020 rival Joe Biden. This claim has already been directly corroborated by a summary the White House has released of the call and by multiple witnesses who’ve testified in House Democrats’ inquiry.

Ultimately, the whistleblower’s identity doesn’t change the revelations that have come out about Trump attempting to pressure Zelensky. It does, however, give Republicans something specific to fixate on as they try to cast doubt on the accusations of wrongdoing faced by the president.

Michael Atkinson becomes latest Trump-appointed official to be targeted by one of his tweets
The fight over whether religion is a license to discriminate is back before the Supreme Court
Dave Chappelle’s SNL monologue was shrewd and political — but more chill than expected
Fauci: 85 percent of the US needs to get the Covid-19 vaccine for “true herd immunity”
Journalism has a trust problem. The podcast In the Dark proposes a compelling solution.
Alexandria Ocasio-Cortez is floating a 70 percent top tax rate — research backs her up