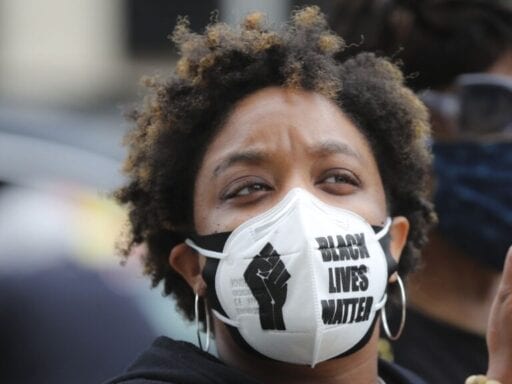 Share
Loading...
Housing discrimination dating back to the 1940s put Black Americans more at risk of contracting and dying from the Covid-19 coronavirus. Here’s how. | Matthew J. Lee/The Boston Globe via Getty Images

One thing hasn’t changed as a new surge of coronavirus cases has swelled across the United States: Black Americans continue to disproportionately get infected by and die from this novel pathogen.

The Los Angeles County health department reported this week that Black residents were dying at twice the rate its white residents were. The same is true of Black Alabamans. In Florida, Black people account for a higher share of Covid-19 hospitalizations and deaths than their share of the population.

The George Floyd protests forced a difficult conversation about the trade-offs of congregating in large groups during a pandemic and the urgency of fixing structural inequities. But more than a month later, there is little evidence the protests contributed to a significant acceleration of the coronavirus’s spread. The health consequences of US inequality, however, are still being felt by Black (and Hispanic and Native) Americans during the worst pandemic of our lifetimes.

Let’s start with the obvious problem: interpersonal racism, whether tacit or explicit, directly harms Black people’s health. So does the distrust it has created between Black Americans and American institutions. This problem goes back centuries: US slaves were experimented on, and more recently, there are horrifying stories like the Tuskegee syphilis experiment. Numerous studies, some of them conducted as recently as 2016, have foundBlack people were less likely to be given pain medication in an emergency department.

And in the middle of the Covid-19 crisis, a new report found that Black people who reported Covid-like symptoms — namely, fever and cough — were less likely to be given a test for the virus compared to white people with the same symptoms. In all these ways, internalized and interpersonal racism lead to worse health outcomes for Black Americans.

But structural racism is also usually, and correctly, proposed as a critical explanation for these inequities.

After speaking last month with half a dozen Black scholars, I came to believe the best place to start in understanding how structural racism breeds racial health disparities is residential segregation. Where a person lives has direct health effects and, maybe as importantly, it will situate them for economic success or failure for the rest of their lives — which we also know is an important determinant for health.

This analysis isn’t meant to be comprehensive. That would require a whole book. But if you want to better understand how structural racism translates to the health disparities that have left Black Americans prone to Covid-19, those factors should be a good place to start.

Residential segregation is one of the primary causes of health disparities

Every scholar I spoke with included residential segregation as a primary driver of racial health disparities — taken together, they identified it as maybe the primary driver.

“I think of residential segregation by race as one of the upstream drivers,” David Williams, a professor of public health and sociology at Harvard, told me. As he wrote in a May 2020 editorial for JAMA on Covid-19 and health equity: “Social inequities are patterned by place, and opportunities to be healthy vary markedly at the neighborhood level.”

The culprit for racial housing segregation is what was called “redlining” during the mid-20th century. If you’d like to read a book about it, I would recommend Richard Rothstein’s The Color of Law for the full story. But in brief, redlining meant that certain neighborhoods were given preference by the Federal Housing Administration. To receive loans to build housing developments or mortgages to buy one of those homes, real estate developers and homebuyers were directed to areas with “harmonious” racial groups (i.e. Black or white). Red lines were drawn around black communities; white people did not get loans to build or buy houses in them, while black people were only given loans to build or buy houses there.

And though racial discrimination is no longer enshrined in official government policy, its legacy is still felt among Black homebuyers today.

“There is a direct line from US government-led discrimination against Black people in housing — also known as redlining — to racism against Black buyers in housing in real estate today,” Belinda Archibong, an economics professor at Columbia University, told me. She cited a three-year investigation published by Newsday in late 2019 that found half of Black homebuyers on Long Island faced some kind of discrimination from real estate agents.

That helps explain why housing segregation persists. As the Economic Policy Institute reviewed earlier this year, just 13 percent of white students attend a school that has a majority of Black students, while nearly seven in 10 Black students do.

How does that discrimination affect black people’s health? If you’re well-versed in health wonk lingo, you know the phrase “the social determinants of health.” First and foremost, those determinants reflect where a person lives. Williams, in his JAMA piece, ticked through all the ways in which the simple location of a person’s residence can affect their health:

Segregation also adversely affects health because the concentration of poverty, poor-quality housing, and neighborhood environments leads to elevated exposure to chronic and acute psychosocial (eg, loss of loved ones, unemployment, violence) and environmental stressors, such as air and water pollution. Exposure to interpersonal discrimination is also linked to chronic disease risk. Greater exposure to and clustering of stressors contributes to the earlier onset of multiple chronic conditions (eg, hypertension, heart disease, diabetes, asthma), greater severity of disease, and poorer survival for African American individuals than white persons. For example, exposure to air pollution has been linked to hypertension and asthma, as well as more severe cases of and higher death rates due to COVID-19.

During Covid, we have seen black neighborhoods in New York City bear the brunt of infections and deaths. These disparities are even found in testing sites; News 5 in Cleveland reported this week that many chain pharmacy locations inside the city were not offering coronavirus testing, while the stores situated in the suburbs were much more likely to make tests available.

So place, determined in large part by residential segregation set in motion long ago, affects Black people’s health to this day. But its effect is more pernicious than that.

It’s not just how the environment affects one’s health. It’s how your place of residence affects your economic opportunities, which in turn can also have an outsized impact on a person’s health.

“Homeownership was and has been the way that Americans build wealth and are able to pass that wealth down,” Jessie Marshall, who studies health disparities at the University of Michigan’s medical school, told me. “With these government-subsidized mortgages being made available to whites and not so for Blacks, that really further set the stage for income inequality.

“As a result of that, there was continued investment into those communities that benefited from the subsidized government mortgages. The building of wealth but then also the building of public K-12 education of good quality,” Marshall continued. “In contrast to those on the other side of that red line, essentially neighborhoods of largely Black folks who did not have those same opportunities, they were not able to build or pass down wealth and were left to be in neighborhoods that were poorly funded for K-12 public education.”

The second and third-order effects have continued to ripple out over the last 75 years. As of 2018, Black Americans had accumulated just 10 cents of wealth for every dollar of wealth possessed by white Americans. In their incomes, Black Americans make just 59 cents for every dollar white Americans are paid. Research has indicated that if residential segregation were to be ended, many of those economic disparities would be dramatically reduced.

Instead, segregation preserves economic and education inequities, which in turn have perverse health effects. Returning to Williams’s JAMA op-ed, he wrote: “Segregation is a critical determinant of economic status, which is a strong predictor of variations in health.”

People who live in lower-income neighborhoods typically have more tobacco shops in their neighborhood (which drives up smoking) and they have less access to fresh food (which drives up obesity). Both smoking and obesity are precursors to the higher rates of diabetes and heart disease seen among Black Americans. As Health Affairs covered in a 2018 article, a person’s income can influence their health in disturbingly literal ways:

A robust literature links chronic stressors, including financial hardship, to deleterious genetic and hormonal changes—such as impaired DNA repair mechanisms and higher cortisol and adrenaline levels—that increase the risk of chronic disease. The negative cardiometabolic effects of poverty seem to start early and continue throughout the life course.

Black Americans have also been disproportionately harmed by mostly southern states refusing to expand Medicaid under the Affordable Care Act. More than 2 million people have been left without any health insurance because of that policy choice, and “uninsured Blacks are more likely than Whites to fall in the coverage gap in states that have not expanded Medicaid,” according to the Kaiser Family Foundation; 15 percent of all uninsured Black Americans would qualify for Medicaid coverage if their state accepted the expansion

Race, place, income, and health, as should be obvious by now, are inextricably linked. And the health consequences of these inequities have been especially evident during the Covid-19 pandemic, as Williams covered:

Economic status matters profoundly for reducing the risk of exposure to SARS-CoV-2. Lower-income and minority workers are overrepresented among essential service workers who must work outside the home when shelter-in-place directives are given. Many must travel to work on buses and subways.

Black Americans have been squeezed from both sides by the coronavirus crisis: Many of them work in the industries enduring serious layoffs, and they are also more likely to work in jobs that are considered “essential,” which requires them to go into work and risk exposure to the coronavirus.

Either way, their health is at risk. And we are seeing the consequences in the Covid-19 death rates.

“It’s America’s institutions and laws, replicated cumulatively over time, that have led to more Black Americans being disproportionately — relative to the rest of the population — classified as essential workers,” Archibong told me, “and concentrated in low-wage service sectors that have placed them at higher risks from infection and mortality from Covid-19 today.”

The EU and the UK still haven’t reached a post-Brexit agreement. What’s next?
I’m American, and I’m multilingual. Why does it feel so scary to speak in another language in publi...
Is this the most important century in human history?
The final 2020 presidential debate
Joe Biden’s long record supporting the war on drugs and mass incarceration, explained
Vox Sentences: Nevada is no Alabama