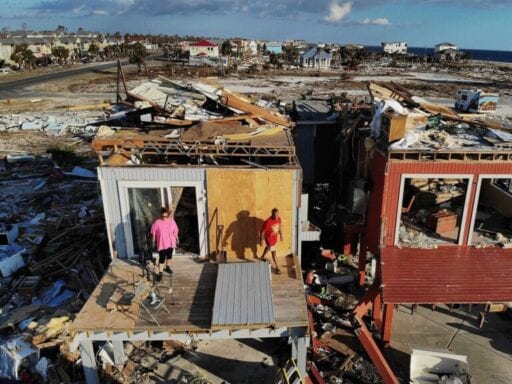 Share
Loading...
Bela and Jaques Sebastiao begin the process of cleaning up their home after it was heavily damaged by Hurricane Michael in Mexico Beach, Florida on October 17, 2018. | Raedle/Getty Images

To find out how 2020 Democratic candidates would use their presidential powers to address climate change, we sent six key questions to every campaign. This post includes nine candidates’ answers to the fourth question. You can find answers to the other five questions on the landing page.

Biden: [I understand] how vulnerable communities — particularly communities of color, tribal lands, and low-income communities — are disproportionately impacted by the climate emergency and pollution.

We cannot turn a blind eye to the way in which environmental burdens and benefits have been distributed unevenly along racial and socioeconomic lines — not just with respect to climate change, but also pollution of our air, water, and land.

The evidence of these disproportionate harms is clear. According to the Asthma and Allergy Foundation of America, African Americans are almost three times more likely to die from asthma related causes than their white counterparts. And, nearly 1 in 2 of Latinos in the US live in counties where the air doesn’t meet EPA public health standards for smog according to Green Latinos.

And according to the federal Government, 40 percent of the 567 federally recognized tribes in US live in Alaska where the rapid pace of rising temperatures and melting sea ice and glaciers threaten the critical infrastructure and traditional livelihoods in the state. We cannot let this continue. [I] will reinstate federal protections, rolled back by the Trump administration, that were designed to protect communities. He will make it a priority for all agencies to engage in community-driven approaches to develop solutions for environmental injustices affecting communities of color, low-income, and indigenous communities.

In addition, [I] will work to fulfill our obligation to all workers impacted by the energy transition and their communities, including coal miners and power plant workers. These communities powered decades of American economic growth, and they deserve our respect and support as we shift our country away from coal as an energy source. [I] will protect the pensions and health benefits that these workers have earned and invest in communities impacted by the climate transformation so that they, too, can succeed in the 21st century clean energy economy. More on [my] plan for coal and power plant communities is available at joebiden.com/climate.

Warren: I support the Green New Deal, which seeks to achieve net-zero greenhouse gas emissions through a fair and just transition for all communities and workers. Specifically, I support the Green New Deal commitments to create high-quality union jobs that pay prevailing wages, hire local workers, offer training and advancement opportunities, and guarantee wage and benefit parity for workers affected by the transition to a non-fossil fuel economy.

My plan for green manufacturing would inject a massive $2 trillion into green research, manufacturing, and exporting. An independent analysis found my plan would create 1.2 million good jobs right here at home. I also believe we need to work with farmers and ranchers to reduce greenhouse gas emissions and pollution, invest in sustainable farming and land use practices and build a more sustainable food system so everyone has access to healthy food.

We must also invest in hardened infrastructure to protect people, particularly vulnerable communities, from extreme weather events. I also believe it is essential to respect the government-to-government relationship between the federal government and tribal governments and to engage in meaningful consultation with tribal nations on policies affecting their lands. My plan for public lands includes a commitment to restoring national monuments targeted by the Trump Administration and formally incorporating tribal stakeholders in the management of public lands.

I’m also a sponsor of the Puerto Rico and Virgin Islands Equitable Rebuild Act — a comprehensive plan for investing in and rebuilding these islands, including by making their electrical grids more renewable and resilient and making significant investments in infrastructure.

Bernie Sanders: [My] Green New Deal is not only a serious climate plan, but an opportunity to uproot historical injustices and inequities to advance social, racial, and economic justice, including redressing the exclusion of black, brown, Native American, and other vulnerable communities from the programs that made up the original New Deal.

As president, [I] will ensure an inclusive, comprehensive process from start to finish. Workers and communities on the frontline of fossil fuel extraction, transportation and use and those most vulnerable to climate impacts must be involved from the creation and implementation of regulations and protocols to the distribution of funds and carrying out the work of the Green New Deal. And we will follow the Principles of Environmental Justice adopted at the First National People of Color Environmental Leadership Summit. The goals and outcomes of the Green New Deal should continue to be developed under the Jemez Principles for Democratic Organizing with strong and consistent consultation with the communities most affected by the currently unequal enforcement of environmental laws.

[I] will ensure justice for frontline communities – especially under-resourced groups, communities of color, Native Americans, people with disabilities, children and the elderly – to recover from, and prepare for, the climate impacts, including through a $40 billion Climate Justice Resiliency Fund. And providing those frontline and fenceline communities a just transition including real jobs, resilient infrastructure, economic development. [I] will invest $238 billion to clean up Superfund sites and $150 billion to clean up and revitalize brownfields, and other areas and communities that have been polluted by the fossil fuel, chemical and mining industries. We will spend $100 billion on fossil fuel well and mine cleanup. We will provide targeted regional economic development to communities especially in need of assistance during our transition to a clean energy economy. We will provide $130 billion for counties impacted by climate change with funding for water, broadband, and electric grid infrastructure investments.

We will extend civil rights protections to ensure full access to the courts for poor and minority communities to seek legal protections by overturning the Sandoval Supreme Court decision that set an unreasonable burden of proof of racism for claims of environmental racism, including disparate and cumulative exposure to environmental health risks. We will fully survey and track pollution in vulnerable communities, ensure the creation and implementation of the Green New Deal is accessible to people with disabilities and non-English speakers, ensure equitable hiring standards, expand nutrition and home energy assistance programs, and much more to ensure that environmental justice is front and center as we transition to a 100 percent sustainable economy.

And this plan will prioritize the fossil fuel workers who have powered our economy for more than a century and who have too often been neglected by corporations and politicians. We invest $1.3 trillion in a just transition to guarantee five years of a worker’s current salary, housing assistance, job training, health care, pension support, and priority job placement for any displaced worker, as well as early retirement support for those who choose it or can no longer work. We will do all of this and much more to ensure a just and equitable future for frontline and fence line communities including real jobs, resilient infrastructure, economic development.

Harris: I will work to pass my Climate Equity Act, which I’ve announced with Congresswoman Alexandria Ocasio-Cortez, to hold the government accountable for not leaving any community behind as we transition to a clean economy. We have to be committed to low-income communities, indigenous communities, and communities of color to ensure that they are given a seat at the table and that the injustices of the past are not repeated. We also have to bring communities dependent on fossil fuel jobs, rural communities, and deindustrialized communities to the table so that our fight against the climate crisis lifts up all communities.

Buttigieg: I believe that we’ve got to build a coalition to effectively combat climate change. There are some estimates that through better soil management, soil could capture a level of carbon equivalent to the output of the entire global transportation industry — we need to make sure farmers and rural America are a part of this solution. I would eliminate tax credits for fossil fuel companies, but dedicate funds to training workers in the industry for new careers. We also need to focus on resilience in vulnerable communities and build stronger infrastructure that can better withstand extreme weather.

O’Rourke: As President, [I] will allocate $650 billion in direct resources — that will mobilize at least $1.2 trillion in capital — toward people and communities that so often bear the brunt of climate change. Investments would include, but are not limited to:

Steyer: My Justice-Centered Climate Plan will not only provide clear air and water, but also honor the contributions and sacrifices of workers in fossil fuel industries and prioritize justice for communities that have been treated as environmental dumping grounds for far too long. While climate change affects us all, it hurts low income communities, indigenous peoples, and communities of color first and worst.

I will implement a sustainable transition to clean energy that begins with creating a 50-state, community-led process to develop tailored local approaches that respond to the unique needs of communities. These community-led plans would see support from all levels of government. For example, the creation of a Civilian Climate Corps will effectively create 1 million jobs for young Americans, underemployed people, and displaced workers, and will work to diversify state and local economies currently dependent on fossil fuel revenues. Building a regenerative, diversified economy requires inclusivity that works to protect unions and workers entering new industries.

Klobuchar: As part of [my] sweeping climate change legislation, [I] will make sure climate resilient infrastructure investments will be targeted towards communities that are disproportionately affected by climate change, including communities of color and tribal communities. [I] also believe that we must fulfill our responsibility to our communities and workers who have helped power this country as we address the climate crisis and [my] legislation will include targeted financial support, job training, and direct federal investment that will create new jobs in communities that depend on fossil fuel industries.

Bennet: My climate plan prioritizes communities most disrupted by the transition to a net-zero emission economy, including those that past pollution has most harmed and climate change now most severely affects. This is addressed in how we achieve net-zero emissions, where we create jobs, in what communities we cut energy waste, in how the Climate Bank invests, and in how we measure states’ progress on their own goals. In particular, my plan creates an Environmental and Climate Justice Office at EPA, develops a Climate X Option to cut energy bills for families, establishes a Next Generation Climate Board of Directors comprised of youth leaders, and requires a progress report aimed specifically at young Americans after the first 100 days. This has been and will be continue to be an integral part of my climate efforts.

The Sanders-Warren dispute about how to pay for Medicare-for-all, explained
Bernie Sanders has declared victory in Iowa, without the final results
Protesters demand justice after police officers aren’t charged with killing Breonna Taylor
Performative masculinity is making American men sick
The absurd 24 hours unleashed by one bad White House answer on Russia
Algorithms are grading student essays across the country. Can it really teach kids how to write bett...