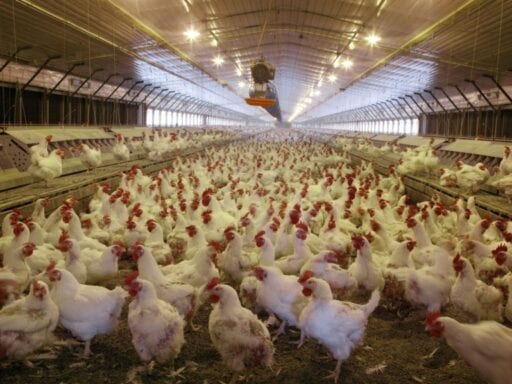 Most Americans don’t know how many chickens are raised on factory farms: up to 50 billion a year.

As North Carolina cleans up from the damage wrought by Hurricane Florence, the scale of the devastation is now coming into focus — including to victims who usually get less attention in disasters like this.

That’s an eye-popping statistic, but livestock casualties in such numbers are in fact not unusual: Factory farming exists on a much bigger scale than most people realize, and there are often economic incentives to let millions of chickens die or even outright kill them without using their meat.

With agriculture happening at that scale, farms like the kind most people imagine — a family-owned business with a few acres and a henhouse — have gotten much rarer, in favor of industrial-scale businesses. The USDA found that consolidation happens differently in animal agriculture than in crop agriculture. While crop agriculture has consolidated at a steady pace over time, consolidation of the livestock industry happens in leaps and bounds, driven by new practices that enable more animals to be kept in the same small space.

There have been several such shifts in practices in the last few decades (for example, vitamin D supplements enabled keeping birds that never see the outdoors, where they would normally get the vitamin from exposure to sunlight). These shifts have led to major consolidation of chicken production in particular. The average number of chickens in egg operations has jumped 74.2 percent over 15 years, and the average egg operation now has almost 700,000 chickens. Many, of course, are even bigger — more than a million chickens died in a fire on a single Indiana farm last year.

Enormous farms like this can hardly evacuate for a hurricane, and they’re not very resilient to other problems, either. In 2005, Iowa’s farms were hit hard by a bird flu epidemic. It wasn’t financially viable either to treat the birds or to separate the infected ones from the healthy ones, so the state’s farmers killed flocks of millions of birds as soon as flu was detected, to reduce the spread of the disease.

This left Iowa farmers struggling to dispose of 26 million dead birds. (Other states were affected, too.) Small backyard farms and family farms were nearly all unaffected by avian flu, prompting some to call it essentially a problem of industrial poultry practices. In Brazil, farmers killed 70 million birds when a truck strike meant they ran out of feed.

People wondering why farmers left the birds to drown in Hurricane Florence are largely failing to imagine how modern chicken farms work. With hundreds of thousands of chickens in a typical operation (meat operations are smaller than egg-production facilities, but still in the hundred thousands), evacuation wouldn’t be a matter of a farmer loading up his truck. It would be a logistical nightmare.

There are economic incentives not to care too much about one batch of birds. Birds raised for meat are killed when they’re about six weeks old. Most improvements that would reduce the risk of events like this simply wouldn’t be economically worthwhile. Because of the scale at which factory farming happens, 3 million chickens drowning — or 30 million killed for disease containment — barely registers.

Should anyone care? It’s not clear that drowning is a worse death for chickens than standard methods of slaughter. But there are lots of reasons for concern about the general changes to the industry which have increased the scale of the industry so drastically and concentrated animals onto so few farms.

Animals are likely to suffer intensely under those conditions. Waste disposal — an extraordinary challenge at that kind of scale — is handled irresponsibly. Efforts to keep animals alive under those conditions have driven antibiotic resistance. The millions of dead chickens floating in the floodwaters of Florence are just one of many ugly effects of our current agriculture system and its unprecedented scale.

Manafort trial jury ends first day of deliberations with no verdict
Rand Paul just blocked a vote to condemn President Donald Trump’s withdrawal of troops in Syria
Mike Pence will attend Biden’s inauguration. Trump will not.
“I learned a lot from Richard Nixon”: Trump’s latest Fox & Friends interview went strange places
With Spinning Silver, Naomi Novik cements her status as one of the great YA fantasy authors
Disney+ will launch in November for $6.99 per month. Here are 5 things to know.