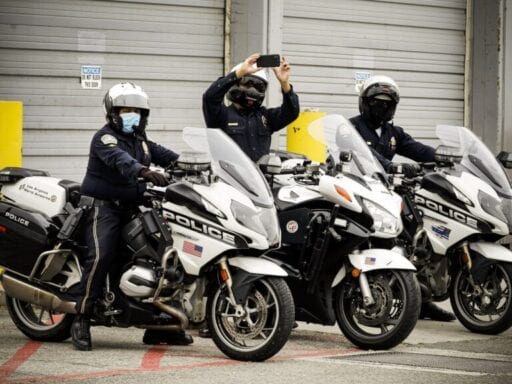 Early Hollywood treated the cops as incompetent fools. Then everything changed.

In 2019, polls found that the police were one of the most trusted public institutions in America, more trustworthy than Congress or journalists or religious leaders. This week, police drove their vans into crowds of protesters, shot paint canisters at people standing on their own porches, fired rubber bullets at reporters and arrested other reporters live on television, and pulled down protesters’ masks to pepper spray them in the face in the midst of a respiratory pandemic.

In 1910, the International Association of Chiefs of Police was moved to adopt a resolution condemning the movie business for the way it depicted police officers. The movies, the IACP complained, made crime look fun and glamorous. Meanwhile, the police were “sometimes made to appear ridiculous.”

It was true: The movies did tend to make the police look ridiculous in the 1910s. From 1912 to 1917, the incompetent Keystone Cops bumbled their way across the silent screen. From 1914 to 1918, animated Police Dog shorts showed a police force unable to prevent adorable Officer Piffles (a good dog) from getting his owner into one scrape after another. And in 1917’s Easy Street, Charlie Chaplin’s tramp-turned-police-officer was only able to save his girl from a mob of criminals after accidentally sitting on a drug addict’s needle and picking up superpowers from the force of the inadvertent injection.

Police in popular culture of the 1910s were inept buffoons to be mocked and, well, ridiculed. And the real-life police reacted with outrage. How could the police do their jobs if people thought of them as losers who could be foiled by a cartoon dog?

The modern police procedural was built by the police

The ridiculous police of 1910s pop culture didn’t come out of nowhere. The police of the late-19th and early 20th centuries were widely understood to be a corrupt gang and not without reason. The infamous Lexow Commission of the 1890s, which ran over 10,000 pages long, found that the police extorted $10 million from the public each year in New York State alone, and that they regularly harassed the citizenry rather than trying to protect them. That report drove 30 years of police reform efforts and gave a young Theodore Roosevelt the chance to build his reputation on cleaning up the New York City Police Department — but for much of the public, the police’s reputation as a pack of hired goons at worst and incompetent bumblers at best had already been set.

Decades of reform helped change the public’s perception of the police. But it also helped that the movie industry, eager to escape police censorship, began to police itself. Studios needed police cooperation to cover up their stars’ misdeeds. They also needed to get shooting permits. They had plenty of motivation to play nicely with the police. So the policeman as incompetent bumbler began to fade away from the movies.

But what cemented the idea of the hero cop in the American imagination was the modern cop show, starting with 1951’s Dragnet. And as many critics have already shown — including, notably, Alyssa Rosenberg in her in-depth study at the Washington Post — the modern cop show was the result of a close relationship between Hollywood and the police.

The premise of Dragnet was that it was revealing to the world the authentic truth of what it is like to be a police officer, fighting crime. “Ladies and gentlemen, the story you are about to see is true,” showrunner, star, and narrator Jack Webb promised at the beginning of every episode. And as Webb’s character, the stalwart LAPD detective Joe Friday, went about his work, he was surrounded by real cop cars and real cops acting as extras in the background of his scenes. Famously, the LAPD checked Webb’s scripts for authenticity.

But as Rosenberg laid out, the LAPD’s help came at a cost. Webb submitted every script to the LAPD’s Public Information Division for approval before shooting, and any element they disliked, he would scrap.

The politics of Webb’s Dragnet were not neutral. “What Dragnet offered the American public,” writes the pop culture scholar Roger Sabin in his book Cop Shows, “was a vision of the police force as a ‘stabilizer’ in society, made up of honest men (mostly men) dedicated both to keeping the bad guys in their place, and to the more abstract values of law and order.” Dragnet presented the police to the public the way the police wanted to be seen: as aspirational heroes.

In 1951, the same year that Dragnet premiered, multiple members of the LAPD assaulted seven civilians, leaving five Latino men and two white men hospitalized with broken bones and ruptured organs. Racially motivated violence against civilians was and still is part of the reality of the police force. But Webb and his collaborators at the LAPD deliberately elided that reality, giving us the fantasy of the hero cop instead.

Today, it’s impossible to critique the police procedural without using the genre the police built

After the success of Dragnet, law enforcement departments across the country began setting up eager collaborations with Hollywood, ready to shape the narrative of the police officer in the public’s eyes. Highway Patrol followed quickly in its footsteps, and then F.B.I., Columbo, Hawaii Five-0, Hill Street Blues, and the mothership: Law & Order and all the series it would spawn. Today, it’s de rigueur for cop shows to have cop experts on consult, ready to apply a patina of authenticity to the stories Hollywood tells us about police.

It is also de rigueur for some of the 21st century’s cop shows to argue that there are serious problems in contemporary police forces. Not all cop shows choose to critique their systems: Law & Order and its various spinoffs tend to place their unfailing trust in the system. CBS’s Blue Bloods aired an episode in 2014 in which a black suspect throws himself out of a third-floor window to frame a blameless white officer for police brutality, the implication being that criticisms of the existing system do nothing but make life easier for criminals and harder for our heroic boys in blue.

But the 21st-century police shows that tend to be highly critically acclaimed and beloved by liberal audiences, like Brooklyn Nine-Nine and The Wire, do try to use their police expertise to critique the institutions in which they take place. The Wire features sympathetic individual cops, but it also depicts police brutality against sympathetic and well-developed civilians, and it argues that police departments are structured to encourage that brutality. And Brooklyn Nine-Nine develops much of its conflict by pitting its well-meaning progressive protagonist cops against the more conservative members of the NYPD.

Not coincidentally, The Wire was considered wildly ahead of its time when it debuted in 2002, especially compared to the traditional police procedurals populating network television both then and now. And by the time Brooklyn Nine-Nine premiered in 2013, gentle criticism of the police as an institution felt like more or less what a respectable liberal viewer could expect from a respectable liberal TV show. The idea that a police show was inherently incapable of being politically progressive barely registered in mainstream criticism. When the journalist and academic Steven Thrasher suggested as much in 2018, calling Brooklyn Nine-Nine “some GOOD propaganda,” he faced widespread backlash.

But regardless of whether a police show codes itself as conservative or progressive, the police officer is always our protagonist. He might be troubled, she might be working within a corrupt system and trying to change it from within, but it is always through their eyes that we see the world. And that’s because the police built the genre that we use to talk about them. So today, even shows that are trying to self-reflexively critique the inherent flaws of the cop show find themselves doing so using the framework that the police built.

It’s for that reason that some actors who have played police officers, including Brooklyn Nine-Nine’s Stephanie Beatriz, have begun publicly donating to bail relief funds for protesters. The donations are an act of restitution for making their living by glamorizing the police.

I’m an actor who plays a detective on tv.

If you currently play a cop?

If you make tens or hundreds of thousands of dollars a year in residuals from playing a cop?

I’ll let you do the math. (Thanks @GriffLightning for leading the way). pic.twitter.com/Xxf3dU0urF

(Notably, at least one figure associated with a less-progressive police show had the opposite reaction. A writer from S.W.A.T. and Chicago P.D. was fired from a forthcoming Law & Order spinoff Tuesday afternoon for making social media posts that jokingly threatened protesters.)

Part of the central joke of Brooklyn Nine-Nine is that Andy Samberg’s character Jake is obsessed with ’70s detective procedurals, and that he became a detective because he wanted to be the star of his own TV show. But Jake isn’t any different from the rest of white America in the way he sees the world. We all grew up on cop shows. And we all reflexively know that when we are presented with a cop story, the cop is the hero.

What all of us have to decide right now is whether we want to continue looking at the world through the framework of that story while outside our houses, police officers are brutalizing civilians in the street.

The best $129 I ever spent: Baby formula
This week in TikTok: Get me out of sea shanty TikTok
Vox Sentences: Kavanaugh’s final countdown
Can US companies solve the Trump tariff problem by manufacturing in the US? It’s complicated.
The 8 Democrats running for president and everything else you should know about 2020
Masha Gessen on American politics after the death of “truth”