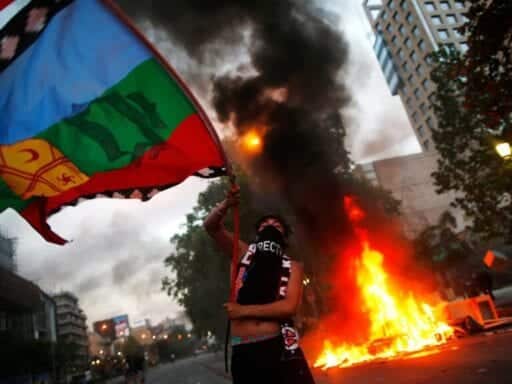 Share
Loading...
A demonstrator flutters a Mapuche indigenous flag near a bonfire in Santiago, Chile ,on October 25, 2019, a week after protests started. | Pablo Vera/AFP via Getty Images

Thousands of people in Chile have taken to the streets to protest against the government.

Sometimes it’s the tiniest spark that lights the biggest fires.

At least, that’s the case in Chile, where a 4 percent fare hike raising the price of a ride on the capital’s metro system by 30 pesos, or about $0.04, ignited mass protests on October 18 that have yet to subside.

That day, students in Santiago called for widespread fare evasion on social media using the hashtag #EvasionMasiva. The turnstile-hopping rapidly devolved into larger demonstrations and chaos, with looting in supermarkets, rioting in the streets, and the torching of 22 metro stations.

Soon after midnight, Chile’s center-right president, Sebastián Piñera, called for a state of emergency, sending military out onto the streets and installing a curfew in cities across the nation for the first time since the end of the brutal dictatorship of the 1970s and ’80s.

Since then, escalating protests have left 19 dead, according to figures from the Ministry of Interior and Public Security. Efforts by the government to quell the unrest — including shuffling the president’s cabinet — have failed spectacularly. Demonstrations have grown in size to encompass a raft of issues from dismal pensions to poor public services.

Few foreign experts saw this coming. After all, Chile had transformed into one of Latin America’s safest and most stable economies. So how did it happen?

Chile has — at least from afar — been heralded as a regional success story for its solid governance and investor-friendly environment. Its free-market model has driven down poverty from 31 percent in 2000 to 6.4 percent in 2017, according to the World Bank, and made the copper-rich Andean nation the highest-ranked country in Latin America on the United Nations Human Development Index.

Scratch beneath the surface, however, and you find a murkier picture. A recent study by Santiago-based think tank Fundación SOL shows that 50 percent of Chilean workers earn less than 400,000 pesos per month (roughly $550), making a small change to public transportation costs a plausible breaking point.

Meanwhile, a UN report from 2017 found that the richest 1 percent of the population earns 33 percent of the nation’s wealth, making Chile the most unequal member of the OECD (an intergovernmental economic organization of largely developed nations).

Julio Pinto, a professor at the University of Santiago who studies social movements, notes that the fruits of Chile’s growth over the past three decades (on the back of the copper boom) have been unevenly distributed.

“The image Chile projects internationally is that of a country that has grown, that has developed, that is in many senses a wealthy country,” Pinto says, “but this image is held up on very flimsy pillars.”

Pinto points to smaller protest movements that have taken place in the country in recent years (seeking better education standards and a fairer pension system) as signals that things have not been going well for the everyday Chilean.

“What’s really new this time around is that all of these tensions flared up together in an explosion that covered the entire country and almost every social sector with a unison that hasn’t happened before,” Pinto says.

“We have gone to the streets to ask for our dignity”

Organized crime groups taking advantage of the unrest to loot and break into property dominated headlines in the first week of protests. However, the narrative changed last Friday when more than 1 million Chileans gathered in and around Santiago’s Plaza Italia for a peaceful demonstration.

Citizens of all social strata banged pots and pans, played music, and carried signs announcing “Chile despertó” (Chile woke up). It was the biggest gathering of any kind in Chilean history, drawing more than 5 percent of the nation’s population.

More than 100,000 protesters joined a symbolic march Sunday along the coast from the beachfront city of Viña del Mar to the Congress building in neighboring Valparaiso. Similar protests took place across the country Monday and more demonstrations have been called for every day this week.

The movement is growing, but its ultimate goals remain difficult to pin down. Unlike previous demonstrations in Chile, there are no clear leaders vocalizing unified demands. (While fractured opposition political parties have expressed support for the protests, they have not led them.)

But a shared theme among the protesters I spoke to is the restoration of social rights and a systematic change to address rising costs of living and stagnant wages.

“This protest is not about 30 pesos, but 30 years,” says Stephanie Díaz, a 28-year-old sports teacher from the working-class Quinta Normal neighborhood in Santiago. “It’s 30 years since the return to democracy, but we have preserved a constitution made under the dictatorship.”

Chile’s constitution, which was written into law during the military rule of Augusto Pinochet in 1980, calls for a highly privatized economy. Even water is a privately traded commodity.

In order to keep up with the rising costs of private-sector services, not to mention some of the highest university tuitions in the world, nearly half of Chile’s 9 million-strong workforce is now in debt, according to a report from Chile’s Comisión para el Mercado Financiero, a regulator and supervisor of the Chilean financial market.

Díaz says she is protesting so that her elders can have a living pension and workers can enjoy better public infrastructure. She wants the everyday needs of citizens to carry more weight in the decisions made by the ruling class.

“We have gone to the streets to ask for our dignity,” Díaz says, “and this will not stop until we get it.”

When Santiago first erupted into chaos on October 18, a (now confirmed) image circulated on social media showing President Piñera dining at an upmarket pizzeria. For his opponents, it was all the confirmation they needed that the billionaire businessman was completely out of touch with the Chilean reality.

Piñera returned to power last year for a second non-consecutive term with the promise of reviving a slowing economy. And he took a hard-handed approach in the early days of the unrest, saying that Chile was “at war with a powerful, implacable enemy.” He later apologized and offered a more conciliatory tone, but his impulse decision to send some 20,000 troops out onto the streets had already enraged a large swath of the Chilean population.

Older generations are still grappling with the ghosts of military rule. Many interviewed on local TV news felt they were forced to relive the pain of some of the darkest days in Chile’s history.

Pinochet’s regime left more than 3,000 dead or missing, with tens of thousands more tortured and imprisoned. Chile’s latest unrest has left more than 3,535 people detained, according to Chile’s national institute for human rights, with many more seriously injured or blinded by the pellet guns used (alongside tear gas) to disperse crowds.

The current UN High Commissioner for Human Rights is Chile’s ex-president, Michelle Bachelet, a left-leaning politician who was herself tortured during the dictatorship. On Monday, she sent a team of human rights officers to Chile to investigate allegations of physical and sexual abuse at the hands of the military.

Ahead of their arrival, Piñera lifted the state of emergency Sunday after gradually removing curfews across the country. Over the past week, he has promised marginally higher taxes on the rich, a boost to the minimum wage, a 20 percent increase in the lowest pensions, and more reasonable costs for medicine.

All of this — in addition to the partial reopening of six metro lines and most grocery stores in the capital — has restored a semblance of normalcy. But opponents call the new “social pact” proposed by Piñera a cosmetic change that does little to solve underlying problems. Some 80 percent of Chileans surveyed by Chilean pollster Cadem found the proposed reforms inadequate in a poll published Sunday in the local newspaper La Tercera.

The government has yet to come up with an effective response to the growing list of economic and political demands, including Piñera’s own resignation. The Cadem poll found that the president’s approval rating had plunged to a historic low of just 14 percent, with posters and graffiti scrawled across the capital demanding his resignation.

Pressure is mounting to quell the unrest before Chile welcomes a number of world leaders, President Donald Trump among them, for the Asia-Pacific Economic Cooperation (APEC) meeting in mid-November. Even more notables — including Swedish climate activist Greta Thunberg — are expected to arrive in Santiago in December for COP 25, the UN Climate Change Conference.

The clock is ticking, but the solutions remain elusive.

Mark Johanson is a freelance journalist based in Santiago, Chile. His articles on Latin America and beyond have appeared in publications such as Newsweek, Men’s Journal, Bloomberg, BBC, CNN, and the Guardian, among others. Find him on all social channels @MarkontheMap or at markjohanson.com.

The Mueller report’s biggest mystery
Catholic Church faces ongoing sex abuse crisis
Beef is bad for the planet. Can we make it better?
A migrant child was returned to his mother covered in lice, according to a new lawsuit
I dare you to not be moved by Another Round, an existentialist film about day drinking
Trump’s Covid-19 diagnosis is an indictment of his approach to the coronavirus