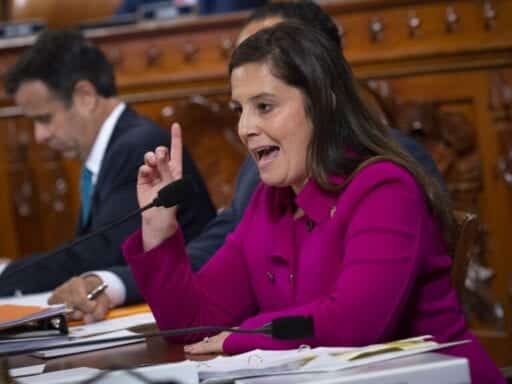 Rep. Elise Stefanik is accusing the House intel chair of treating Republicans unfairly, but all he did was try to enforce the rules.

At one point during Friday’s impeachment hearing with former US ambassador to Ukraine Marie Yovanovitch, House Intelligence Committee Chair Adam Schiff (D-CA) shut down Rep. Elise Stefanik (R-NY). He did so not to silence her, but because she was violating the rules the House approved to guide the impeachment hearing.

Nonetheless, within a matter of minutes, right-wing media, with an assist from Stefanik, spun the incident into a story about Schiff wronging the only Republican woman partaking in the impeachment hearing — a narrative that quickly made its way to President Donald Trump.

The impeachment inquiry rules specify that both Democrats and Republicans have 45-minute blocks of time during which the chair or ranking member and their counsels can ask witnesses questions. Other members are not allowed to ask questions during that time, but do have individual five-minute questioning periods afterward.

Nonetheless, when the Republican 45-minute block began, intelligence committee ranking member Devin Nunes (R-CA) almost immediately tried to delegate his time to Stefanik. Schiff quickly stepped in to point out that Republicans were violating the rules.

“Under the House Resolution 660, you’re not allowed to yield time except to minority counsel,” Schiff said.

“This is the fifth time you have interrupted a duly-elected members of Congress,” Stefanik interjected, before the hearing proceeded with Republican counsel Steve Castor asking questions.

(In case you’re interested, Schiff was right about the rules — members can defer their five-minute questioning block to another lawmaker, but the 45-minute blocks are only for the two parties’ ranking members and their staff. Stefanik had her chance to ask Yovanovitch questions later.)

This might not seem like a big deal in a vacuum. But within minutes, Stefanik posted a tweet characterizing a situation in which Schiff was merely trying to enforce the rules as one where Republicans were being singled out.

Once again, Adam Schiff flat out REFUSES to let duly elected Members of Congress ask questions to the witness, simply because we are Republicans. His behavior is unacceptable and he continues to abuse his Chairmanship. Watch pic.twitter.com/qm9Uj8tiHO

Minutes later, Daily Wire staffer Ryan Saavedra posted a tweet framing the incident as one in which “Schiff’s behavior toward Elise Stefanik is appalling.”

“If a Republican did this the media and the Democrat Party would instantly accuse them of being sexist,” he wrote, above video of the exchange. (Republicans have been criticized for interrupting Democratic congresswomen in recent years, but typically in cases when they interrupt during a congresswoman’s allotted questioning time.)

If a Republican did this the media and the Democrat Party would instantly accuse them of being sexist pic.twitter.com/MJsiqcnt3w

A short time later, the Schiff-Stefanik exchange was the top story on Fox News’s webpage, with framing not dissimilar from Saavedra’s tweet.

The story soon found its way onto TV when Fox News contributor Andy McCarthy criticized Schiff’s move to enforce the rules as “a tactical error.” Later, Trump himself got in on the act, retweeting a post from House Republicans that asked, “Why is Chairman Schiff afraid of @RepStefanik?” And during a media availability a short time later, Trump lamented that “they’ve taken away the Republicans’ rights” because “they weren’t able to ask questions.”

Asked to respond to ppl who say his tweets this morning attacking Yovanovitch constituted witness tampering, Trump attacks process as “a disgrace.”

“I’m allowed to speak up,” he says. “In the history of our country, there has never been a disgrace like what’s going on right now” pic.twitter.com/U99usmEr2Q

The episode illustrates how bad-faith attacks can quickly make their way from Twitter to Fox News to the president’s lips. But it also illustrates how Republicans are struggling to defend Trump’s conduct on the merits. Instead of making a case that Trump was right to oust Yovanovitch earlier this year from her post as US ambassador to Ukraine during a time in which he tried to leverage diplomacy into political favors, they’re attacking the process and suggesting that Schiff is simply a bad dude with partisan motives.

It’s misleading — but it provides a useful way for Republicans to cry foul about impeachment without having to actually defend Trump. For instance, during a media availability after the hearing concluded, Stefanik again characterized Republicans getting called out for running afoul of the rules as “just more of the ridiculous abuse of power that we see from Adam Schiff.”

Stefanik characterizes Adam Schiff trying to enforce the rules during today’s hearing as “just more of the ridiculous abuse of power that we see from Adam Schiff.” pic.twitter.com/T7lSEvGZi2

Stefanik went on to dismiss a question about whether she was troubled by Trump posting tweets that were widely viewed as trying to intimidate Yovanovitch during her testimony, saying “the only people that were limited from asking questions were Republican members because we were muzzled by Adam Schiff.”