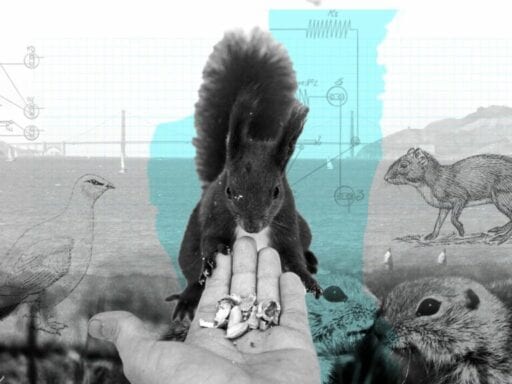 Feeding animals can seem helpful. But it does more harm than good.

Looking at the nation’s most intriguing experiments in local policy.

Where: The Bay Area, California

The furry, flecked brown animals, native to California, are born burrowers, and in early 2014 they inundated the park with prime views of San Francisco Bay, burrowing so deep into the soil that officials fretted that they’d come dangerously close to breaching the clay cap that sealed the landfill beneath the park.

The city came up with a rodent abatement pilot plan to lethally control — that is, kill — the large number of ground squirrels in the park. But as that plan was floated, even an engineer surveying the damage shared with a student newspaper suspicions about what might have caused the squirrel population to spike in the first place: peanuts. Park visitors had been feeding the animals nuts, experts surmised, which in turn had only drawn more squirrels. One feeder brought a pound of peanuts at a time to hand out.

As the public outcry against the proposal reached significant levels, the city of Berkeley pulled lethal abatement off the table and asked for wildlife and environmental groups to help in creating a workable plan to manage the ground squirrel population.

Stopping the feeding of the animals was the main goal. A new city ordinance was passed in July 2014, prohibiting feeding animals not only in the park, but on most Berkeley public property.

The city also provided enforcement of this ordinance, with minimum fines of $100 after an initial “warning period,” and fines of up to $500 for multiple infractions.

Feeding wildlife may seem helpful, fun, and educational at first. The person doing the feeding gets the thrill of seeing and interacting with wildlife up close, and the animals get a free handout that tastes good and requires little effort to procure. Some also consider it emotionally beneficial — in a recent public hearing for a new law in New York City that bans feeding wildlife, one older man declared feeding pigeons to be his form of therapy to applause from the crowd.

But each year, the vast majority of the nearly 4,000 ill, injured, or orphaned wild animals admitted to Wildlife Hospital — an animal hospital run by WildCare, the nonprofit I work for, in Marin County, California — require medical care due to negative interactions with humans, our pets, or our stuff. One of the most preventable causes for animal injury is from humans feeding wildlife.

Since the 1970s, California state law “outlaws the harassment of animals, defined as ‘an intentional act which disrupts an animal’s normal behavior patterns,’” and many cities and counties also have local ordinances in place to discourage feeding. However, it’s still extremely common to see families offering bread or crackers to ducks at a pond, putting out pet food for the neighborhood skunks and raccoons, or leaving apples out for deer.

The lagoon at the Civic Center in Marin is home to hundreds of waterfowl including mallard ducks and Canada geese. Human visitors frequently bring bread or other processed, carbohydrate-rich treats for the birds, and the birds flock to consume them. Some will even take the treats right from the hands of visitors, eating a diet primarily made up of human foods.

Feeding means that ever-increasing numbers of ducks and geese visit the Civic Center lagoon, and stay there. Unnatural population gathering, and the interspecies aggression that goes with it, are two of the most obvious negative consequences to feeding wildlife. Birds arrive at the wildlife hospital bleeding from torn-out feathers, and from peck and bite wounds after altercations over food handouts. There’s also the health hazard for humans and birds alike caused by unusually large quantities of droppings from these overfed birds.

One health risk that may be less obvious, however, is the one we see most often in the Wildlife Hospital: malnutrition.

Birds that feed on bread or other human handouts fill up on the tasty carbohydrates, which means they don’t forage for the natural foods they need to maintain a varied and balanced diet. Some birds in Marin County have been admitted to the hospital for a condition called “angel wing,” which is similar to rickets, a disease of malnutrition suffered by human children that leads to weak, soft bones and stunted growth, and is exacerbated by the sedentary lifestyles adapted by birds that receive handouts. Animals that are fed the incorrect diet may also suffer from obesity, poor feather or fur condition, susceptibility to illness, and many other risks which directly affect their ability to survive.

Whatever pleasure feeding the occasional squirrel or duck might give park-goers, the ripple effects on the wildlife itself are dangerous.

After Berkeley’s ordinance was passed, the city spent $8,000 on bright new “No Feeding” signs and informative brochures at César Chávez Park about the ban. This was paired with volunteer outreach and media alerts to spread the message that feeding the squirrels had very nearly resulted in their destruction.

Parks Department staff and volunteers began monitoring the park, paying special attention to areas where piles of empty peanut shells gave away the feeding hotspots. Volunteer docents with the local Audubon Society were already in place to talk with park visitors about the small population of burrowing owls that often overwinter in the park. With training, these docents and volunteers were able to instruct visitors with printed materials about the dangers of feeding wildlife, designed with the park’s particular inhabitants in mind.

César Chávez Park had its fair share of “occasional” offenders who would provide scraps of food. But the primary culprits — those who brought bags of food specifically to feed the squirrels — appeared to be a small number of individuals who the Parks Department staff targeted. Parks employees approached the feeding hobbyists with educational materials that let them know their activity had very nearly cost the squirrels their lives. Ultimately, even these most dedicated squirrel feeders realized that ceasing to provide food was in the best interest of the animals they loved to observe.

The community efforts worked, and the population of ground squirrels has been naturally reduced to a level that is no longer perceived to be a risk to the stability of the park.

In any situation where feeding is a problem, stopping feeding leads to dramatic improvements. If free handouts are no longer available, animals return to their natural foraging habits. Almost immediately, population pressures are eased, and hungry animals start to pursue a more varied diet. In some situations a tapering off of feeding may be recommended in order to prevent aggression from animals accustomed to hand-feeding, but in general most animals move on quickly.

César Chávez Park was a success story. The clay cap beneath the park, once at risk, was no longer under threat after the vast reduction in squirrels. The order to lethally control the squirrel population was never implemented. We’ve found that in all areas where ordinances are combined with enforcement, wildlife populations are visibly reduced and the more varied diet improves the health of individual animals.

Throughout the United States, animals suffer from humans’ attempts to help them by feeding them. Bringing a pound of peanuts every day to feed the Berkeley ground squirrels is an obviously misguided effort, but even feeding birds at birdfeeders can cause the problems seen at the Marin County lagoon and the Berkeley park.

Wild animals are better off without human handouts.

Alison Hermance is the Director of Communications for WildCare, a nonprofit wildlife hospital and nature education center located in Marin County, California.

Deputy Attorney General Rod Rosenstein’s future in question
Why Trump’s release of the Ukraine call transcript could hurt US foreign policy
5 fact-checks from the Senate’s hearing on social media
50 years after Stonewall, the NYPD finally apologizes to the LGBTQ community
Google’s former CEO just committed another $1 billion to charity. But he’s spending it on buzzwords.
A less miserable winter