How a CNN graphic sparked the #YangMediaBlackout controversy online 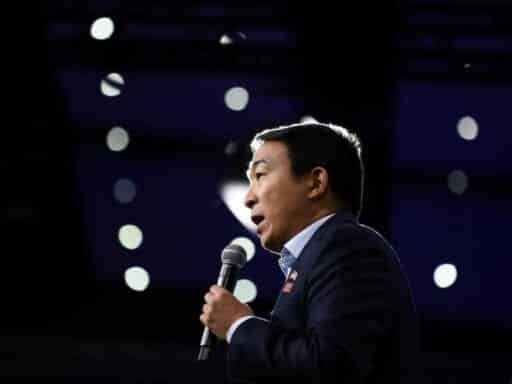 Andrew Yang’s supporters say he’s being ignored by the press.

CNN forgot to put Andrew Yang in an election graphic on the screen and now his supporters are mad on the internet.

To catch you up: On Thursday, the hashtag #YangMediaBlackout trended on Twitter because the 2020 presidential candidate’s followers — the so-called “Yang Gang” — were angry over a perceived slight in media coverage of him. The source of their ire was CNN’s coverage of a Quinnipiac University poll or, rather, the network’s visualization of it. In a graphic titled “Top choice for Dem. nominee” the network showed six candidates, including Beto O’Rourke, who registered 1 percent support in the poll. Conspicuously missing from the graphic was Yang, who polled higher, at 3 percent.

Writer and Yang supporter Scott Santens, who has been tracking CNN and MSNBC graphics and their oversight of Yang for weeks, tweeted out the graphic in question. And that set Twitter off.

CNN: “We have decided that if @AndrewYang didn’t exist, these would be the top 6 from the Quinnipiac poll, so despite Yang polling 3% in this poll, there is no point in displaying him in the top 6.”#YangGang #Yang2020 #WhoIsAndrewYang? pic.twitter.com/S3geCQ0HC9

Supporters complained that the media has deliberately sought to undermine Yang’s candidacy by ignoring him. “This is total BS,” one person tweeted. “I’m mad and fucking tired,” tweeted another. Some people swapped a separate graphic showing how often candidates are mentioned on major cable television networks and Yang trailing most other 2020 contenders.

Others took it as an opportunity to spread the word about Yang and tried to demonstrate the Yang Gang’s power. And when Yang on Thursday announced he’d be appearing on CNN in the evening, they celebrated it as a victory.

Heading on @ChrisCuomo on @CNN tonight around 9:30 EST – looking forward to it.

The #YangMediaBlackout is an example of how Yang, who hails from the startup world, has amassed a vocal online community of supporters in the Yang Gang. While sometimes problematic, the Yang Gang has also helped to propel his candidacy forward. Yang, who is running on a universal basic income platform, is one of this election cycle’s most memed candidates.

Yang and his supporters are hardly the only group to complain about unfair treatment from the media this election cycle. Other 2020 contenders, including Bernie Sanders and Marianne Williamson, have also reproached the press. And some contenders have also embraced conspiracy in their bias accusations. The situation is yet another example of a Twitter hashtag shaping a campaign narrative.

The Yang Gang has been mad online for a while

Yang’s supporters have throughout this election cycle complained that he’s not being treated fairly by the media and other gatekeepers. The CNN graphic and the #YangMediaBlackout is just the latest example of that.

After the June Democratic debates, Yang accused NBC of cutting off his microphone. “There were also a few times, FYI, where I just started talking, being like, ‘Hey, I’d like to add something there,’ and my mic was not on,” Yang told supporters after the debate, according to Politico. He reiterated the complaint in a subsequent interview on The View and also complained that he was only asked two questions. Williamson also complained that her microphone was sometimes not on. NBC vehemently denied their claims.

During both the June and July debates, the hashtag #LetYangSpeak trended on Twitter.

There has been a difference between how Yang has fared online and how he’s doing in the polls and being covered by the media.

The tech entrepreneur has sparked a lot of Twitter chatter; according to social media software company Sprout Social, Yang was the fourth-most-discussed candidate on Twitter during the last two Democratic debates. During the July debates, the hashtags #YangGang and #ReturnOfTheYang trended.

Yang isn’t the only lesser-known candidate getting traction online. During the July debates, Williamson and Gabbard were the most-Googled candidates. And Williamson has launched a plethora of memes of her own.

The Yang Gang has generally been a point of strength for Yang. They helped him reach the Democratic National Committee’s donor threshold to land him on the debate stage in June and July and again in September. And he’s doing better in the polls than many traditional politicians.

But the Yang Gang has also at times clashed with more traditional Democratic voter outlooks. A lot of the group’s online activity has taken place on 4chan, and parts of that platform have become a gathering place for white nationalists and other ugly behavior. As Russell Brandom at the Verge wrote in March, Yang’s universal basic income proposal is popular among younger voters, and his appearance on Joe Rogan’s podcast gained him a surge of supporters among that audience. But he also gained traction from some white nationalists, who “have been able to pick and choose statements from Yang to support the idea that he’s uniquely concerned with halting the decline of the white race.” Yang has pointedly disavowed any such support.

Yang’s supporters kind of have a point here

Yang’s backers aren’t wrong in noting that Yang is polling better than a lot of other, better-known politicians in the 2020 field. According to a RealClearPolitics average of polls, Yang has 2.5 percent support; that’s ahead of Amy Klobuchar, Cory Booker, and Beto O’Rourke.

And Yang isn’t alone in complaining that media gatekeepers are covering his campaign different from how they cover other campaigns. Williamson and her backers were enraged earlier this year when Vogue featured four women running for president in a photo shoot and left her out. In 2016, Sanders and his supporters often complained that he was being treated differently by the press than Hillary Clinton. This election cycle, Sanders has also chafed at media coverage of his bid, and his campaign has argued that he’s getting unfair and negative coverage yet again.

To a certain extent, they’ve all got a point: The media can be at times more inclined to cover the candidates they know better and reinforce their preconceived narratives about the race. In the case of the CNN graphic that sparked this week’s #YangMediaBlackout hashtag, O’Rourke, who ran a highly publicized Senate campaign in 2018, was expected to do better than Yang and a lot of people in the polls. He hasn’t. He also has more name recognition than Yang, at least in the political sphere.

But there’s also not some grand media conspiracy against Yang. It’s highly unlikely that CNN and MSNBC executives are sitting in a conference room every morning figuring out how their graphics department can undermine his campaign.

The 2020 conspiracy theory primary is kind of a thing

The #YangMediaBlackout trend is not the first conspiracy to pop up on Twitter this election cycle, and like it or not, it’s probably not going to be the last.

After the July debates, a confrontation between Kamala Harris and Gabbard sparked all sorts of conspiracies about a #KamalaHarrisDestroyed hashtag that began to trend on Twitter. Harris’s camp said it was being spread by bots. Gabbard’s said it was organic. After that debate, some people also questioned whether search results that showed Gabbard was the most-Googled candidate were real.

In July, Gabbard sued Google for $50 million, arguing that the tech company censored her after the first Democratic debate. That’s not really what happened: Her campaign upped ad spending around the debate after seeing she was trending on Google, and the increase triggered a brief suspension of the account because of unusual activity. Gabbard has also complained that she thinks the DNC’s process for figuring out who gets on the debate stage, including the polls that determine qualifications, aren’t transparent. The rules have been pretty clear from the beginning.

It’s not abnormal for candidates to complain they’re being slighted or that the rules of the game aren’t fair, perhaps especially when they’re losing and looking for someone to blame. (Or, in the case of Donald Trump, just always.) But social media can magnify those issues and blow them up into something much bigger. Should the CNN graphic have included Yang? Sure. Did that merit being a major topic of conversation? Probably not.

In the UK’s health system, rationing isn’t a dirty word
Why the coronavirus cancelled the NBA
Trump tweeted a conspiracy theory that an elderly man knocked over by police is “antifa provocateur”
Poll: 53 percent of lower-income US households won’t be able to pay all of April’s bills
The Super Bowl halftime show controversies, explained
Robert Mueller wants to question the “Manhattan Madam”