How a denial of tenure at Harvard became a national controversy 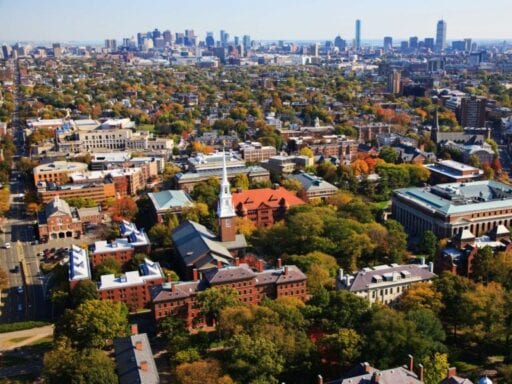 The decision is a blow to ethnic studies departments everywhere.

Earlier this month, over 50 Harvard students staged a sit-in at University Hall. They held banners that read in big, bold letters: “Ethnic studies.” They chanted, “Ethnic studies! When do we want it? Now!” What they also wanted: justice for Lorgia García Peña, the only Latina professor reportedly on the tenure track at Harvard University who had recently been denied that distinction.

Peña, an associate professor of romance languages and literatures, was not only up for tenure, but she was also considered to be the best candidate to lead the school’s ethnic studies initiatives, according to students; after a 50-year push, the Ivy League school still lacks an ethnic studies department. Peña holds prestigious honors in ethnic studies and is a leading expert in Dominican studies, making Harvard a leading school in this field as well. And yet without giving any public reason, the university denied her tenure. (Vox has reached out to both Peña and Harvard but has not received a response.)

While students and faculty had signed an open letter criticizing Harvard’s decision, last week over 200 of the brightest US scholars in ethnic studies also drafted a letter condemning the university’s treatment of Peña. They also acknowledged that her case is not an anomaly in academia. Renowned women’s and African American studies scholar bell hooks, Berea College’s distinguished professor in residence, summed up the predicament:

“Harvard’s denial of Dr. Garcia Peña’s tenure is a testament to the ways that Black and Latinx Studies continue to be ignored as sites of vital knowledge production in the academy. Dr. Garcia Peña’s scholarship and service is the cornerstone to continue building Ethnic Studies as a leading program at Harvard and her absence would be a detriment to the students and faculty that depend on her keen insight.”

hook’s words echo loudly over the heads of women across the country who, like Peña, struggle to do great work in ethnic studies despite the lack of support and acknowledgment of their achievements. In fact, the struggle for professors of color to be respected is as old as ethnic studies programs themselves.

Ethnic studies was born out of protest

Ethnic studies programs work by challenging the “Euro-American studies curricula” that has permeated universities since their inception. As such, the programs often cross over into other humanities fields like history, literature, gender, and sociology, allowing students to study the power and effects that white supremacy and colonization have had on various cultures and communities — and to ultimately better understand the social structures in place because of it. Courses include “Chicanos, Law, and Criminal Justice” (UC Berkeley), “History and Resistance in Representation of Native Peoples” (Brown University), and “Black Noise: African American and Social Change from Slavery to Hip Hop” (Bowling Green State University). Thus, by challenging the very institution it’s in, the existence of ethnic studies programs has always been controversial at best, and nearly impossible to create without some degree of social upheaval at worst.

In the early 1900s, famed civil rights activists and educator W.E. B. Dubois offered up several writings that became the foundation of ethnic studies, The Atlantic noted in 2016. This included his piece titled “Does the Negro need Separate Schools?” for The Journal of Negro Education in 1935. “The proper education of any people includes sympathetic touch between teacher and pupil; knowledge on the part of the teacher, not simply of the individual taught, but of his surroundings and background, and the history of his class and group…” he wrote. Dubois also acknowledged that creating these programs would not come easy. This is a sentiment that would become evident three decades later, when the first official ethnic studies program was born.

1968 was already a tumultuous time in America. The civil rights movement was forcing a racist nation to incite change, while groups like the Black Panthers, the NAACP, and the National Liberation Front were trying to bring justice to communities through a grassroots approach. These groups were gaining supporters all over the country, including from San Francisco State University. The school’s administration, however, grew enraged with the politics of a black English professor named George Murray, who was also an on-campus organizer and member of the Black Panthers. Murray was eventually suspended, and students rose up.

On November 6, 1968, over 400 students led by the school’s Black Student Union occupied the campus and protested in what became the longest student demonstration in history. It was also extremely violent. Police sprayed students with mace and beat them with batons. Hundreds were arrested and many others were injured. In March 1969, the protests came to an end when, among other demands, the university agreed to create an ethnic studies department.

Several other schools’ ethnic studies departments had a rough start as well, creating their programs only after student and faculty protests. In some cases, the students and supporting faculty undertook decades of struggle before the university caved and allowed the programs to exist. The students at Columbia University, for example, began pushing for an African American studies program in the 1960s, according to the Columbia Spectator. However, it wasn’t until 1993 that the university partially granted the request by creating the Institute for Research in African-American Studies (IRAAS), an academic resource center that supports scholarly activities in the field of African American studies.

This institution was a great step, but it was not a true program, as IRAAS was not allowed to grant tenure to its professors. It would take a hunger strike and a few more decades of targeted protests, along with some pressure from black faculty on the inside, to get a victory. The African American and African Diaspora Studies department at Columbia was finally created last December.

“Despite decades of student protest and activism, ethnic studies is not designated as a formal field of study at the college. Students concentrating in history and literature can pursue a focus field in ethnic studies, but it is not its own concentration,” the student paper Harvard Crimson reported in May.

The current protests over Peña’s tenure denial also seek to gain legitimacy for the Harvard ethnic studies programs. In response to the letters and protests, Dean of the Faculty of Arts and Sciences Claudine Gay said in a statement on December 10 that the university is committed to building an ethnic studies program and is doing so by actively searching for “more faculty who specialize in ethnic studies before creating a formal department to house them, citing professors’ wide influence over curriculum, advising, and research.”

An earlier Harvard Crimson article noted that Peña was part of the committee created to search for more faculty — a role that may now feel like a smack in the face since being denied tenure.

The ethnic studies struggle is still just as real today, and female professors of color feel it, too

The lack of legitimacy given to ethnic studies continues to plague not only the programs, but also the professors who created and maintain them. Out of the 1.5 million university professors in the US in the fall of 2017, less than 12 percent of them were women of color, according to the National Center for Education Statistics.

Dr. Olivia Perlow, an associate professor of sociology, African and African American studies, and women’s and gender studies at Northeastern Illinois University, studies the role of BIPOC, particularly women, in today’s academic world. She said that there are “a whole host of challenges” that BIPOC women face as faculty.

“Scholars have developed a plethora of terminology such as ‘racial battle fatigue,’ ‘multiple marginality,’ ‘negotiating the minefield,’ and so forth to describe what it is like for people of color in the academy,” Perlow said. The struggle is worse for those in the ethnic studies fields. “The problems that are directly related to ethnic studies professors is that their work — which not only includes their oft-POC-centered scholarship, but also their dynamic and relatable teaching, the mentoring relationships they form with students, etc. — is not valued in the first place.”

When assessing the need for these programs, universities still do not prioritize the needs of students of color, Perlow added. “Despite the fact that so many students of color find a home or a safe/brave space in ethnic studies and with the professors, this is not a priority to a white academy that seeks to maintain its supremacy,” she said. “So again, ethnic studies (and its professors), are ever on the chopping block.”

Harvard senior Rosa Vazquez, who helped organize the recent protests, told the Boston Globe that the university has also recently lost four professors who teach ethnic studies. “We haven’t felt that our histories are welcomed in the classroom and everybody is frustrated,” she told the publication.

Harvard alum Jeannie Park said the secretive process of how tenure is granted at Harvard also left students feeling uneasy. Peña is well-regarded in the field of Latina studies; her 2016 book, The Borders of Dominicanidad: Race, Nations and Archives of Contradictions, won several prestigious awards, including the National Women’s Studies Association Gloria E. Anzaldúa Book Prize and the 2016 LASA Latino/a Studies Book Award. Many scholars across the country wrote letters advocating for her tenure before Harvard made its decision. “How can we continue to encourage faculty to come build this program, when the university has treated ethnic studies scholars so poorly?” Park told the Globe.

Perlow pointed out that ethnic studies departments aren’t being taken seriously because they have risen out of that same neglect. “Why would we expect the academy to be different when the academy itself has been a hotbed for racist, sexist theorizing, research, and practices since its inception, and especially elite institutions such as Harvard, which were quite literally made possible by slave labor?” she says, referring to the fact that colleges like Harvard, built before 1865, benefitted from enslaved labor.

Ethnic studies by its very nature was created to defeat white supremacy’s hold on educating minority students long cast out of the system. If the reason for that systemic grip was acknowledged, faculty like Peña would gain her rightful permanent place in an academic institution like Harvard.

“Dr. Peña represents hundreds of years of racist and sexist marginalization and exclusion of women of color in the academy,” Perlow said. Until the centuries-old bias in higher learning is recognized and reckoned with, the only lesson that will come of Peña’s case is one BIPOC faculty know all too well. “Just like the lessons we’ve been taught from police violence, we know that no matter what we do or don’t do, we are not safe,” said Perlow.

How to craft your personal style
Everything is awful. Here’s a Q&A with a philosopher about why cats rule.
Paid sick leave could be a deciding issue in November’s key House races
9 highlights from the impeachment trial this week
The robot revolution will be worse for men
The controversy over “Kylie Jenner, self-made billionaire,” explained