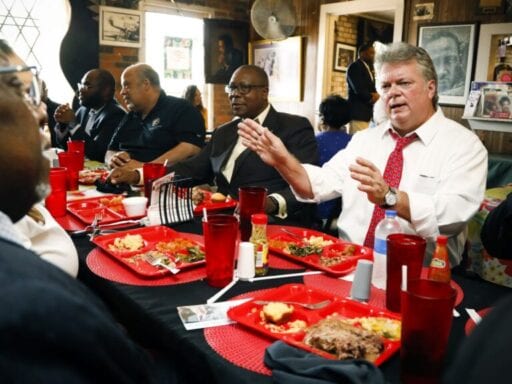 It makes it all but impossible for a Democrat to win in November.

Jim Hood is a political unicorn. A Democrat, Hood nonetheless has won four consecutive statewide elections in the blood-red state of Mississippi — all of them for attorney general. Now he hopes to add a new line to his resume. He’s the Democratic candidate for governor in next month’s election. And the polls suggest that he’s got a real fighting chance.

But there’s a catch. Mississippi held a constitutional convention more than a century ago to, in the words of one former state governor and US senator, “eliminate the n****r from politics.” One still-remaining vestige of that convention is the unusual way the state conducts its statewide elections.

For statewide positions other than US senator, Mississippi uses a system similar to the electoral college. It’s not enough for a candidate to simply win the statewide popular vote. Rather, they must win both a majority of the popular vote and win a majority of the state’s 122 state house districts. If no candidate clears both of these hurdles, the state house chooses the winner from the top two candidates.

Hood, for what it’s worth, did win his attorney general races by large enough margins to overcome this system — in 2015, for example, he beat his Republican opponent by more than 10 points. A 2013 profile of Hood in Governing magazine argues that he’s able to do this, in part, because he’s a good cultural fit for the state. Hood “styles his hair like the late country singer Conway Twitty,” and he is both a gun owner and an avid hunter. His current job as attorney general also allows him to be the face of popular issues like locking up child pornographers or suing fraudsters who took advantage of Hurricane Katrina victims.

Yet, while Hood has resisted the political gravity of conservative Mississippi better than any other Democrat, he may not be able to escape it altogether. His 55-45 victory in 2015 was his closest election to date (he crushed his first opponent by nearly 26 points). Earlier this month, Hood’s campaign released a poll showing him with a 45-42 percent lead over Republican gubernatorial candidate Tate Reeves. That’s not nearly enough to overcome Mississippi’s electoral college-like system.

Thus, as a practical matter, Mississippi’s system all but ensures that Reeves will win November’s election, even if a majority of the state’s voters prefer Hood (the incumbent, Republican Phil Bryant, cannot run again due to term limits). Republicans currently control almost 60 percent of the state’s house of representatives. And state house districts are gerrymandered in a way that would make it very difficult for Hood to win a majority of those districts.

Indeed, a lawsuit challenging this system suggests that Hood may need to win at least 55 percent of the vote in order to prevail in the gubernatorial election. Reeves could potentially lose by as much as nine percentage points and still walk away as governor.

Lawyers in that case, McLemore v. Hosemann, will ask a federal judge to suspend Mississippi’s electoral college-like system at a hearing on Friday (the lawsuit was originally filed in May, months after Democrats knew that Hood sought the state’s highest job). Yet for a variety of reasons, those lawyers face an uphill battle if they want to prevent this system from deciding the 2019 governor’s race.

It may seem odd that Mississippi’s unusual system of choosing governors is only now being challenged, but the most likely explanation is that this may be the first election where a political party has such a clear stake in how the state chooses governors. For much of Mississippi’s Jim Crow history, it was effectively a one-party state, with Democrats dominating elections.

Democrats, moreover, remained a powerful force in the state legislature for many years after the Voting Rights Act of 1965 extended the franchise to most black voters in Mississippi. Although the 1999 governor’s race was thrown to the state legislature, Democrats still controlled the state legislature in 1999, and Democratic candidate Ronnie Musgrove won the popular vote that year (though he failed to get a majority with 49.5 percent of the vote). So the state’s electoral college system produced the same result in 1999 as a popular vote system.

Mississippi’s odd system, in other words, largely lay dormant for many years. Yet it could suddenly rise almost 130 years after its inception to hand the governor’s mansion to the loser of the 2019 popular vote.

The racist history of Mississippi’s Constitution

A catastrophe loomed on the horizon, US Sen. James George warned a Jackson, Mississippi, audience in 1889. By 1900, George predicted, African Americans would outnumber whites by two to one. White power could be drowned in a sea of black votes. He urged a drastic solution: a new state constitution that would ensure “home government, under the control of the white people of the State.”

Almost immediately after he was elected president of Mississippi’s 1890 constitutional convention, Judge Solomon Calhoon embraced George’s purpose in a speech to the delegates.

“The ballot system must be so arranged as to effect one object,” Calhoon proclaimed. “We find the two races now together, the rule of one of which has always meant economic and moral ruin” and the rule of the other race, the white race, “has always meant prosperity and happiness.”

Thus charged, the delegates produced a comprehensively racist document. The Constitution included a poll tax intended to prevent poor African Americans from casting a ballot, a prohibition on interracial marriage, and a requirement that “separate schools shall be maintained for children of the white and colored races.”

It mandated a literacy test for voters, the same easily manipulated mechanism that President Lyndon Johnson warned of when he proposed the Voting Rights Act.

The registrar is the sole judge of whether [a voter] passes this test. He may be asked to recite the entire Constitution, or explain the most complex provisions of State law. And even a college degree cannot be used to prove that he can read and write. For the fact is that the only way to pass these barriers is to show a white skin.

The 1890 constitution was wildly successful in achieving its racist goal. When Johnson signed the Voting Rights Act in 1965, less than 1 percent of eligible black voters in Mississippi were registered to vote.

Many of these racist provisions have since been repealed; the poll tax was removed from the state constitution, for example, by a 1975 ballot referendum.

But the electoral college-like system that could render the 2019 gubernatorial election a mere formality lives on.

The plaintiffs in McLemore argue that this system was another Jim Crow provision enacted to lock African Americans out of power. To implement this system, they argue, delegates to the 1890 convention “first apportioned the legislature such that white individuals, despite being a minority in the State, controlled the House.” A 1902 publication from the Mississippi Historical Society described this gerrymander as “the legal basis and bulwark of the design of white supremacy in a State with an overwhelming and a growing negro majority.”

The legal argument against Mississippi’s way of picking governors

More than a century after the 1890 convention, little has changed in how Mississippi’s state house districts are drawn. White voters, according to the legal complaint in McLemore, “control 65 percent of House districts.”

Thus, white-majority districts are overwhelmingly likely to support Reeves for governor while African Americans are likely to prefer Hood. Just as was the case in 1890, this system virtually ensures that white voters will get to choose Mississippi’s governor. Indeed, an expert witness supporting the plaintiffs suggests that Hood would need to win “at least 55 percent of the popular vote to have any decent chance of satisfying the Electoral-Vote Rule.”

Among other things, they argue that “it is well-settled that an electoral scheme that minimizes or cancels out a minority group’s voting strength has a discriminatory effect, and, when that scheme is enacted for a discriminatory purpose, it violates the Fourteenth and Fifteenth Amendments.” They also claim that the Mississippi system violates the Voting Rights Act’s prohibition on any law that “results in a denial or abridgement of the right of any citizen of the United States to vote on account of race or color.”

The state, for what it’s worth, denies that the electoral college-like system disadvantages black voters, claiming that it’s “never operated to deprive an ‘African-American-preferred candidate’ from being elected to statewide office.”

It’s not an easy case for the plaintiffs as their arguments will be considered by a judiciary dominated by conservatives who tend to be skeptical of voting rights claims. But even if the courts ultimately accept the plaintiffs’ arguments, there are quite a few legal obstacles standing between Team McLemore and a judicial declaration that Hood should be governor if he wins the popular vote.

For one thing, the case may not have been brought by the correct plaintiffs. In Gill v. Whitford (2018), the Supreme Court dismissed a case brought by 12 Wisconsin voters challenging that state’s gerrymandered maps. The Court reasoned that because those plaintiffs’ “injury is district specific,” they could only challenge the specific legislative districts where they lived and not the state’s entire map.

There are only four plaintiffs in McLemore, not one for every state house district, so Mississippi argues that these four plaintiffs lack the power to challenge a statewide electoral system.

This argument is not especially persuasive. Gill involved a challenge to legislative districts while McLemore involves a challenge to how the state elects a statewide officer. So the McLemore plaintiffs’ injury is not “district specific.” Nevertheless, a conservative judge who wants to delay a decision striking down the Mississippi system may rely on Gill to do so.

The Supreme Court’s decision in Purcell v. Gonzalez (2006) presents a much more serious problem for the McLemore plaintiffs. In that case, the Court warned that “court orders affecting elections … can themselves result in voter confusion and consequent incentive to remain away from the polls,” and that “as an election draws closer, that risk will increase.” The Supreme Court frequently invokes Purcell to vacate lower court orders that change a state’s election procedures close to an election.

Mississippi’s gubernatorial election is less than a month away. That’s well within the Purcell window where the Supreme Court typically puts a hold on major election law decisions.

Even if the McLemore plaintiffs prevail, in other words, their victory is likely to be delayed until after the 2019 election. Jim Hood is Democrats’ best chance in two decades of winning Mississippi’s gubernatorial race. But that’s not likely to be enough, thanks to an electoral system contrived by racist delegates more than a century ago.