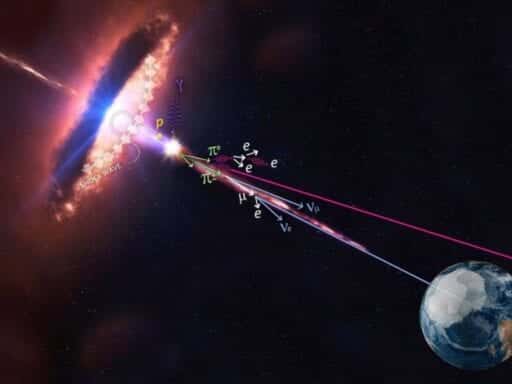 It involves an enormous ice cube at the South Pole.

The South Pole is an inhospitable place to do science. Temperatures can drop below minus 99 degrees Fahrenheit. The air is thin and moisture-less.

Yet physicists are flocking to an observatory there because it’s one of the best places to answer a mystery that’s been haunting their field for more than a century: What in the universe is shooting incredibly powerful beams of subatomic particles at Earth?

Scientists discovered in 1912 that subatomic particles — the building blocks of matter, such as protons, electrons, muons, neutrinos, and quarks — hit the Earth every day. They later learned they were hitting us with an energy that surpasses the power of human-built particle accelerators, like the Large Hadron Collider. Some of these particles carry so much energy that scientists have been puzzled as to which objects in space are powerful enough to create them.

Now, we have an important clue as to at least one object that may be responsible for some of these particles, often called “cosmic rays,” that hit the Earth. In two new studies appearing Thursday in Science, a large team of physicists reports that one of the sources of cosmic rays is a special type of galaxy called a blazar. Blazars have supermassive black holes at the center of them that rip apart matter into its constituent parts, and then blast subatomic particles off like a laser cannon into space.

The entire mystery of the source of cosmic rays is not solved. Scientists don’t know if there are other objects that can produce the rays, and the current results can’t yet explain the most powerful cosmic rays detected on record. They’re also not perfectly confident that the blazar is the source. (Physicists don’t use the word “certain” lightly.)

But it’s an intriguing start. Cosmic rays were first discovered in 1912. And we’re just now getting a big break to understand how they get here.

(The National Science Foundation is live streaming their press conference announcing the findings. You can watch that here.)

There are some sources of cosmic rays that we do know about, like the sun, which is constantly spitting out bits of matter in all direction. Some cosmic rays can even be produced from atomic collision at the top of our atmosphere.

But then there are the cosmic rays being shot at us at energy levels that truly leave scientists dumbfounded. That’s the 100-year-old mystery.

The best comparison we have to explain the energy of these rays is the Large Hadron Collider near Geneva, Switzerland. The LHC is the most powerful, sophisticated particle accelerator on the planet. It can accelerate a proton to nearly the speed of light, and charge it with the energy of seven terra-electron-volts, or TEV. This is enough power to smash atoms into tiny, tiny pieces and reveal the architecture that makes up our universe.

It’s impressive. But it has nothing on the energy of the particles that rain down from space. The highest-energy cosmic ray particle ever recorded, called the “Oh-My-God” particle, was two million (!) times more energetic than the protons propelled at the LHC.

“How does nature do this?” Francis Halzen, a University of Wisconsin particle physicist and a lead collaborator on the new discovery, asks. “This has been for decades listed as one of the big open questions in astronomy and physics.”

The problem with looking for the sources of these very high energy cosmic rays is that they don’t always travel in a straight line. And that means they can’t trace it back to its source. In fact, we have the Northern and Southern Lights near the poles because the Earth’s magnetic field redirects much of the cosmic rays to these regions.

This is where the South Pole observatory comes in. There, Halzen; Naoko Kurahashi Neilson, a particle physicist at Drexel University; and several of their colleagues in physics have been looking for answers in the ice.

They work on the IceCube Neutrino Observatory, which is built directly into the ice beneath the surface of the South Pole. The observatory is funded by the National Science Foundation and is operated by the University of Wisconsin.

Basically it is a 1-cubic kilometer (about 1.3 billion cubic yards) block of crystal-clear ice surrounded by sensors. These sensors are set up to detect when subatomic particles called neutrinos — which travel along with other subatomic particles in cosmic rays — crash into the Earth.

Neutrinos are different from the other components of cosmic rays in one hugely important way: They don’t interact with other forms of matter much at all. They don’t have any electrical charge so Earth’s magnetism doesn’t deflect them. And they travel through the universe in a relatively straight line, and we can trace them back to a source.

“If I shine a flashlight through a wall, the light won’t go through,” Neilson, a co-collaborator on both of the new papers in Science, explains. “That’s because the light particles, the photons, interact with the particles in the wall and they can’t penetrate. If I had a neutrino flashlight, that stream of neutrinos would go through the wall.”

But every once in a while a neutrino — perhaps every one in 100,000 — will hit an atom in the ice at the observatory and break the atom apart.

And then something spectacular happens: The collision produces other subatomic particles, like muons, which are then propelled to a speed faster than the speed of light as they pass through the ice.

You might have heard that nothing can travel faster than light. That’s true, but only in a vacuum. The photons that make up light (a subatomic particle in their own right) actually slow down a bit when they enter a dense substance like ice. But other subatomic particles, like muons and electrons, do not slow down.

When particles are moving faster than light through a medium like ice, they glow. It’s called Cherenkov radiation. And the phenomenon is similar to that of a sonic boom. (When you go faster than the speed of sound, you produce a blast of noise.) When particles move faster than light, they leave wakes of an eerie blue light like a speedboat leaves wakes in the water.

Here’s an artist’s depiction of what this all looks like. The neutrino is the tear-drop shape in gray.

The light emitted from the particles is why ice is critical to the observatory. It’s crystal clear. Sensors can spot the flashes and then draw a path to where it originated in the sky. The particular neutrino — and it was just one — that led to the new discovery hit the ice cube in September 2017 with an energy of 290 terra electron-volts. Again, that’s 40 times as energetic as the particles in the LHC.

Within a minute, the computers at the observatory determined the neutrino had come from the direction of the constellation Orion, and sent out an automated alert to observatories around the world to hunt for a more precise source.

Here, the researchers caught a lucky break. Almost simultaneously, the Fermi Gamma-ray Space Telescope detected an increase in energetic activity from a galaxy in the same direction. And observatories around the world and in space picked up on it too.

The Science papers argue this likely was not a coincidence: Fermi and the other observatories picked up the same blast of cosmic rays that propelled the neutrino to the IceCube observatory and they traced it to a single blazar 4 billion light-years away. Still, the scientists are not entirely sure.

“This result doesn’t make it absolutely certain the neutrino came from the blazar,” says Kyle Cranmer, an NYU particle physicist not involved in the research. “I’d want to see another such observation.”

And the IceCube scientists agree. “I compare it to a police investigation of a murder,” Halzen says. “We just made a breakthrough and we know we’re going to find the person, but [we] didn’t get him yet.” Though the case for the blazar is made more compelling by the fact that when the IceCube team went back through their data from the past few years, they found other neutrinos that were likely spat out by the same blazar.

IceCube detects neutrinos on a regular basis, and astronomers look at blazars on a regular basis. What’s new and exciting here is that the IceCube team was able to turn to colleagues in observatories around the world to track a high-energy neutrino to its source for the first time.

As with many discoveries in physics, this one raises more questions than it answers. Scientists still don’t know how blazars actually accelerate particles to such high energies. They don’t know if all blazars are capable of doing this, or just some of them. And they don’t know what other objects in the universe could produce high-energy cosmic rays.

“This is science as usual,” Halzen says. “You solve a problem, and then it opens many more questions that are harder to solve. But that’s a perfect situation to be in to make progress.”

But perhaps more exciting than these findings is that there’s likely much more to come from these kinds of international collaborations in astronomy. “Regardless of whether or not this neutrino is actually from this blazar or not, [the results they produced are] just an incredible exercising the muscles of the whole system,” says Sarah Demers, a Yale particle physicist not involved in the research. That the IceCube lab can send out an alert that other telescopes can corroborate in the same day is an impressive accomplishment.

In recent years, astronomers have become excited by the idea of “multi-messenger” astronomy — the idea of seeing the universe with forces of nature other than light. Yes, we can see the universe in all sorts of wavelengths of electromagnetic radiation: visible light, infrared, ultraviolet, gamma, and so on. But all of these forms of radiation are different forms of light. What’s new and exciting about physics today is that we can also “see” the universe in terms of neutrinos, and, as of two years ago, gravitational waves.

Combining the power of observatories that can probe electromagnetic radiation, neutrinos, and even gravitational waves make it easier to for scientists to peer further back into the universe. “That’s the game-changer here,” Neilson says.

The US-Turkey trade spat, explained
ICE’s planned deportation raids in 10 big cities: what we know
How anti-Semitism festers online, explained by a monitor of the darkest corners of the internet
Andrew Cuomo has a plan to start reopening New York — eventually
Facebook’s new label on a Trump post is an “abject failure,” says a Biden campaign spokesperson
Greg Gianforte flips Montana governorship to Republicans